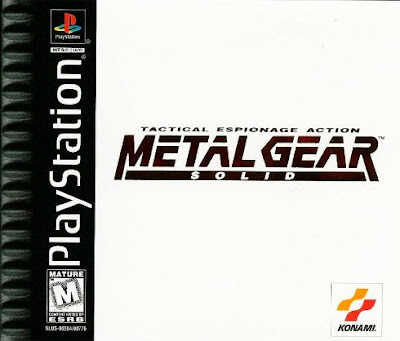 I had to work that morning and needed to be there to open the store, so I was in the mall at 9:30am.  When one of my guys got in with me, I snuck away to whatever FYE was 20 years ago to make a quick video game purchase.
If I had known that the game I was about to buy would change the direction of the next year(S) of my life, I would have--…  fuck that, I’d have bought THREE!

I worked 9:30-6 that day and IMMEDIATELY rushed home to my Playstation (the boring-looking-ass Playstation 1!), locked away in my bedroom and proceeded to not be heard from other than to work, eat, bathe or shit for weeks.  If at any point I can remember a favorite game becoming my favorite that quickly, this was the time.
The story was fun going through.  It was engrossing to have a story with layers and twists and shit, mixed in with the “sneaking around and cutting dumbass guards’ throats” aspect of it.  The Easter eggs found in subsequent plays through kept the gameplay fun.  When we had played through the game so many damn times that there was nothing more to find, the game became to throw it in the Playstation and try our damndest to literally sprint through the game in one sitting, finishing it as quickly as possible.

By this point, my twin and I each had our own Playstations and the clamor for this ONE game was such that we actually had our own copies.  Trust, this was the first (and I think, the last) time we did this shit while living in the same house.

I have not had a system capable of playing this particular game – which, by the damn way, came on TWO discs – in over two and a half years, but my original copy is still hidden away in my house on the chance I come across one.