You too can be famous, little girl... Talent no longer required

August 04, 2010
It seems that pr0ns is the new preferred means to getting one’s foot in the door these days… In the last couple of weeks, we have witnessed the black/Russian girl from For the Love of Ray J (don’t judge me) not only make her pr0ns DEBUT in a rather uninspiring scene on BangBros, but she has also come back for more. I was so unimpressed with the first one that I have not bothered with watching the second as of yet.

I should have been worried about the name she allows herself to be called in her new career, but I am less than surprised after she let that ignant-ass Ray J call her “Caviar” because ‘um… don’t they eat caviar in Russia?’ according to him. There again, she let some cornball-ass (by looks and actions, mind you) dude who calls himself “Chicago Larry” pimp her into going onto the show in the first place, and neither was good enough to keep their cover from being blown, so perhaps she isn’t too bright.
Not that she is an unattractive girl in the least, as an as-Googled image shows: 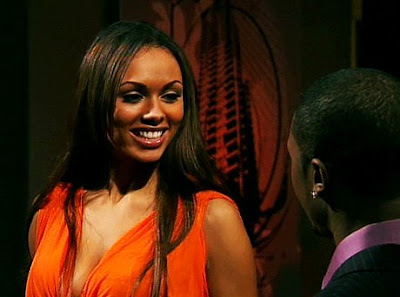 It seems more to me that it is fame and fast money that she craves, but armed only with her exotic good looks, but with a dearth of actual talent with which to pursue it, she is left with but to chase it by any means necessary.
[Phlip note – and not in that Malcolm Little way, either]
So here we find ourselves… A girl who has been caught trying to lie her way to reality show stardom on VH1 (hell, it worked for several to ‘lose’ on these shows before her), a terrible grasp of the English language and nothing but her good looks on her side. What does she do? She leaves LA, goes to Miami and hooks up with the internets’ premier and benchmarked “reality” pornographers.
Right, because EVERYONE wants to see pretty girls they would not be able to obtain take a load of ball goo to the forehead for their dime, not matter how bad the scene may be.
[Phlip note – am using a shared password, I do NOT pay for pr0ns]

Anyway…
The fact that she’s gone back to the well within 2 weeks suggests that the buzz, as well as presented downloads by legally paying customers – as well as savvy consumers such as myself – that the initial rush of page hits/buys from the first scene was lucrative enough. Never mind that it actually happened to be mostly boring as shit. I guess that at the end of the day, pr0ns is a lot like music, it doesn’t even have to be good or necessarily entertaining, so long as the talk about it properly piques the interest of a paying public.
Or perhaps Bangbros have such a name that they now could lay that bad of an egg and be dickish (pun VERY intended) enough about it to tredge forth knowing that people are paying for their shit anyway?

Then, furthering ourselves into the negro news wire this past week has been Larry (I will NEVER call him Laurence) Fishburn’s daughter appearing in a concertedly-released sex tape. “Concertedly,” as employed, means she is doing the shit on purpose for profit and exposure. As opposed to recording a truly amateur session with someone she knows personally and some vindictive fuck leaking it to the internets, like that one time we saw that guy shove a stovepipe up rapper Eve’s vajeen.
How do we know she did the shit on purpose?
Well, she TOLD us! In so many words, following the lead of her now-mentor/idol Kim Kardashian, she will use the sex tape, to be released for profit by the same production house, as her stepping stone to her own level or lane of fame. I guess having a dad who played a prominent role in one of the most genre-changing movie series' of our time, and the influence that would wield, was not influential enough. No, not in a world where Will Smith is writing his son’s walk through Hollywood in an over/underacted (depending on your point of view)-yet-unquestioned manner.
I have not and will not be viewing these scenes any time soon, for worry that Morpheus may come and visit me at my place of employment and make an offer I should not refuse, beginning with the ingesting of a red or blue pill… Not that I am worried about that so much as the fact that I work for a medical facility for whom I could be piss tested at ANY time , and I don’t know what in the hell is even IN those pills.
That and they may do some foul shit to my computer, and I am becoming attached to that thing.

Anyway…
Is anyone seeing the common bond, here? Ray J is the problem here. He was the one who took Kim Kardashian from simply being the OJ Lawyer’s daughter to “that white girl with the black girl ass” which was the difference between being an heiress to a fortune and making one of her own. Not that the desire to make one’s own fortune is bad, but damned if I – in the same position -- am fucking with a lame on the level of a Ray J if I can simply take the family money and use THAT to make my own dough. See, it is fortune I desire and not fame, but this isn’t about me, so I cannot understand the things that cause such behaviors.

I COULD have blamed VH1 for this situation if Kim K had gotten it in with Ray after the show. This with consideration that I have seen no fewer than 4 chicks from those shows in pr0ns SINCE their respective ousters from the shows (3 were from Rock of Love, for the record), including Caviar/Bethany Benz. I have seen countless others naked in various internets publications, including two who went on to get their own shows.
The fact, though, remains that I can’t blame VH1, Viacom is doing what Viacom does, making money letting people humiliate themselves…

The issue, it seems, remains that there is now apparently this culture that has now eschewed, the onus of talent being the confirmation needed to allow one to become famous.
Pay attention at home, young girls…
If you happen to be untalented, or can’t work what strengths you DO have to get to your desired station in life then all you have to do is get buttnekkid for it. Spread ‘em wide, smile for the camera and behave as if someone spraying a fresh batch of tadpoles on your forehead is somehow normal or even perhaps desirable behavior. Do so while maintaining the illusion of genuine enjoyment of the whole thing, even if he misses and hits your hair, besides, it stands to reason that it is good for your hair. Those with honor, dignity and self-esteem need not apply.

Again, the fucked the fuck up part is that neither of the above-described girls is unattractive, and either, given presented influence (Montana Fishburn) and exposure on an inexplicably-highly rated that I somehow watched show (Caviar) DIDN’T NEED to “speak into the microphone,” to employ a crass metaphor.

If this is what shit has come to, I pray to God that The Katie has boys and not girls, lest I will find myself under someone’s jail for drawing and quartering the FIRST motherfucker to lay eyes on my little girl.