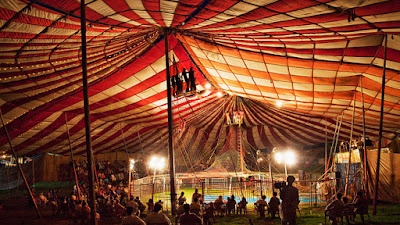 2017…
In 2017, Ringling Brothers & Barnum and Bailey closed up shop and shut down the Red/Blue/Gold lines for good.  I didn’t mention it at the time because I legitimately thought that they would wait a few months and regroup before going “haha, SIKE!!!” and rolling out the new schedules for the next year, then I would wait until February and drag my daughter and now-wife out to the coliseum for a couple of hours.

2018…
My only circus options were UniverSoul Plane Circus which usually swings through here but is so small that they’re setting up shop in the mall parking lot and not even in the coliseum or its lot, some localized circuses in places where I haven’t left anything and then there is good ol Cirque Du Soleil, whose shows I have seen two of in my actual-adult-age (over 21) trips to Las Vegas, but not the times the travelling show has come to my city.

2020…
(and yes, I skipped 2019)
Excusing the universe shitting its collective pants for the world with especially America to smell and considering that one of the above-named Cirque shows (Run!, the one in the Luxor hotel), and considering the fact that my daughter was with her mother in 2016 during circus week, I was still four years without a full-on circus.  I was getting antsy.

Inexplicably, the Ringling Brothers website is still up for people to become “preferred customers,” whatever in the hell ever that means when the other properties that Ringling’s parent companies have names that stand on their own without playing Weekend at Bernie's with the circus’ carcass.
I had an idea.

A quick chase through the links to the parent company’s home page led me to the vaunted “contact us” link, which the time I have on my hands being home hiding with my family from the triple R -  Rona, Rioting and Ravage.
[Phlip note: okay, so two out of three of those]
I went and slid into the DM in ALL social media mediums that I use, twice daily, I checked back the second time each to see if my intial one was read and got increasingly more passive aggressive with each passing attempt; “I don’t know if you got my message/es…” Next I upped the ante to include phone calls in which I was placed on hold and transferred and placed on hold and transferred in a VERY obvious attempt to frustrate me into hanging up and letting it go.  Any veteran of a call center knows this trick.  But again, I had time…

One hour later, after plugging my phone into the charger and breaking out my Bluetooth headphones to field this one from the couch and not my desk where the charger is, I finally got to where I needed to be.

I didn’t tell y’all what the shit I was even after, did I?
As a curious child whose reading materials were more mature than my age at the time and outward maturity level as an adult would suggest, I learned that early circuses were freakshows and often a traveling exhibition of the truly macabre.  I learned that the colorful and sparkly happy shows that we have come to see travelling circuses of my lifetime didn’t exist then in the showcases and they were NOT for kids or the faint of heart.  A 2020 “psycho killer clown” was just a “clown” in the late 1800s.
Perhaps using “2020” in that sentence was a bit light, considering the amount of what else has taken place in the eight months we have survived thus far, but you get it.
Anyway…  Given the unflappable nature that movies, video games, the evening news and the internet has instilled in our children, maybe it is time to get the circus back to what sparked the voyeurism in people to make them want to come out and see.

Okay, now back to the story…

After the evasive “Deebo hold time” maneuver was ineffective, I had someone on the phone willing to pretend to listen to me prattle on about how to run their business.  She will not be named on the chance that she shouldn’t have been talking to me about it in the first place.

Me: “I sincerely hope you can…  I have some ideas that might be able to help you out.”

Me: “Likewise.  So check it.  Feld already has the ‘wholesome’ entertainment on lock.”

Me: “Monster Jam, Disney on Ice, Sesame Disney AND Marvel live, Jurassic World Tour!  Nothing you guys have even comes from a franchise that can TRULY be rated above PG.”

Me: “Well, maybe Jurassic World, but I haven’t seen news of an Indominus Rex darting into the cheap seats and killing a 2nd grader while her horrified parents looked--…”

Me: “Excuse me.  Where was I?  Anyway, I am guessing that as a supposed person of authority in a company that has most famously and successfully owned the Ringling Brothers & Barnum and Bailey brand twice in their history, you know a bit of the history.”

Me: “So you remember the freakshows and shit, right?”

Me: “Well… You sound younger than me, and I don’t remember the freakshows, but I read about them when I was little.”

Me: “Look, kids nowadays are fearless.  They’ve watched years of war live on TV, they see the police murdering people in the face live on the news three nights a week.”

Me: “So they need to be entertained!  They’re OVER Bello Nock pretending to almost fall off of a balancing pole while holding a pile of dishes.”

Her: “So what is the suggestion?”

Me: “Jesus, you ARE young.  Let’s just say I saw a girl at Food Lion yesterday who could carry on that tradition.”

Me: “Nah…  Cirque got that on lock.  Zumanity basically has people fuckin’ on stage and damn near DARES people to play along in the audience.”

Me: “So anyway.  Freakshow, REALLY fucked-up shit.  Don’t put age restrictions on, but place a very conspicuous warning all over the place so you don’t get hemmed up.  It is not lost on me how many times the circus was burned down under mysterious circumstances.”

Her: “So look, I have notes I have been taking during this conversation and will pass it along to my superi--…”

Me: “Wait, YOU’RE not the ‘superior’ I just waited a whole-ass hour for?”

Her: “Unfortunately not, sir.”

Me: “Well shit…  Check it. If you would like a recording of this conversation, I can upload and send it to you.”

Me: “I’m in North Carolina and you’re in Florida.  I can consent to the recording of the call and be fine according to the federal law and that of my state.”

Me: “So you want this recording for a better transcript?”

Her: “That won’t be necessary.”

After five weeks of electronic communications, three weeks after my phone call and still yet less time than the delivery of the last watch I ordered has taken, I received an email, obviously in response to all of the social media messages wherein I had left my email as a means of response on the chance they needed to include any other necessary entities to the response chain…

We have received all of your correspondence(s) across various platforms and matched them with the conversation you had with one of our directors.

While we’re always open to ideas and solutions that might allow us to revive iconic brands that we still own, we are afraid that we just cannot justify the throughput of or backlash from the ideas you have put forth.  We are, as you quite apparently (and respectably) are, aware of the history of the circus after establishment in the Americas.  We wish you all the best in your endeavors which should PROBABLY include pitching ideas such as you have come to us with to television or movies.

Well I’ll be damned.  Someone else sees it!

Hopefully someone sees fit to call me back someday.