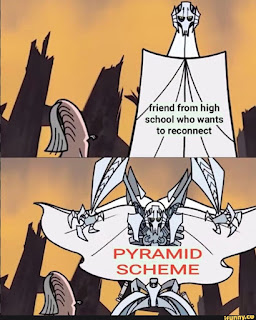 Sometimes a “missed” connection is not actually one that was worth maintaining.

I fully remember most of the people I went to high school with, and have maintained constant contact with the ones I choose to in the 23 years since.  Even before social media became a thing.  There are some, however, that I decided even then that I would never speak to once I set foot off of campus.  Those are the ones I’ve seen at football games when outside was still open, at the grocery store or Wal Mart here and there and will resort to wily tactical maneuvers to avoid being seen.

But there is a neutral middle ground as well.

That middle ground is basically not the people I might have referred to as “friends,” but surely aren’t the ones who made my life difficult.

Somewhere between the former and latter in the above-named, are the people who clearly peaked RIGHT there in accomplishment and maturity.  Sadly, some of those individuals are living the ol’ AL Bundy “four touchdowns in one game” past glory, and anyone who didn’t do that 20 years ago is apparently a loser of some sort.  We all know someone(s) like this.
That person has usually never left the city they grew up in, not further than one can drive and return from in the same day.

So early August, I get a follow on Insta from one of what I thought at the time was the neutral middle ground.  As infrequently I post pictures of my puppy or whatever I’ve cooked, I usually got a like or a comment.  I scrolled through their posts in a bored afternoon.  It was a shrine to years past and the comments were an echo chamber of like-minded people who either also peaked in high school or sycophants who wouldn’t tell someone that they had so as to not be called a “hater.”  God forbid someone point out that his Jordans were fakes, they’d have to shoot him.
I’m not generally interested in needless conflict, so I didn’t bother commenting my opinion.  Just backed out and went on with my day.

… then the inbox chimes.

Me: “Chillin, staying safe in this house.”

Him: “Word, what you doing these days?”

Me: “More consistent than starting a rap career at 40.”

Me: “A little bit.  I did some ghost writing for the president a couple years ago.”

Him: “Well you be easy man, I’m about to get to this meeting and wanted to say whatup.  I be seeing your brother around but not you.”

Me: “Yeah, he has to work outside of the house.”

From there, the conversation was over.  I couldn’t help feeling something about the need to mention a “meeting” to take place on a Saturday evening in the middle of this pandemic.  Whatever, life goes on.

About a week later, I posted a picture of a watch I had ordered in June that had FINALLY showed up after an excruciatingly long international shipping window.  All likes, no comments.

… then the inbox chimes.

Me: “Ordered on eBay, shipping took almost two months, but it ain’t like I was going anywhere.”

Him: “Was it expensive?”

Me: “Sure, it ain’t like anyone owes me to be the only one with shit.”

So I send him the link to the sale for it.  He backs out of the conversation AGAIN with the vague mention of a meeting of some sort.
Why does he keep telling me about his meetings?
Meh, I have bigger fish to fry.

Anyone who follows me knows that my FB is a more interesting follow than my Instagram is.  That is to say that I am on it far less than I am on FaceBook.  My friends who might send me an inbox message might sooner text me if they want me to read it in any kind of reasonable time.

Two days after the watch conversation, I have an inbox message on Instagram.

Him: “Hey man, thanks for the information on that watch.  I’mma order one on Friday.”

Him: “So check it.  I know you say you work for [redacted], but what are your plans for retirement?”

Me: “We save, we use our retirement accounts through our employers and we invest a little bit.”

Me: “Spend a lot of time on Google and reading, then investing in stocks and crypto with the spare money.”

Him: “And that’s working out for you?”

Me: “Yep, doing better than I have ever been in my life.”

Him: “What if I told you you could be making even more?”

Him: “I’m talking about owning your own business, man.”

Me: “I ain’t built for business ownership.”

Him: “It ain’t like that.  What is your number, you can come to one of these meetings with me.”

I told y’all something was up with those fucking meetings.
This is normally the place in life where I delete and block someone in the name of Charles Ponzi.

These days, I got nothing but time though.  I have been tricked into these meetings before and needed to make sure to build an “out,” so I insisted on bringing my own car and not being driven to it.
This also means I had the exact address and time of the meeting ahead of time.  I went to the BookFace under my Moe Phillips burner account and created a community post at the exact time and location of the meeting, saying that we would be giving away Rona supplies (masks, hand sanitizer, etc…) and to act fast before supplies run out.  The post quickly had hundreds of comments and shares.

Meeting time.  I get to the location of the meeting, a fellowship hall in a small church on the north side of town, and there are cars PACKING the parking lot, and none of the involved looked like Multi-Level Marketers, so much as people looking to receive the free shit I had shadow-promised in a public post I actually deleted from FaceBook while I sat in the car just outside the parking lot.

Maelstrom is what it was.  People were LIVID that they were not to receive the supplies they were “promised,” and refused to leave without them.  The people who had hustled unsuspecting acquaintances into coming to the “meeting” to be sold the dream of being able to sell a dream to other unsuspecting acquaintances ad infinitum were unable to enter their meeting for the people in their way.

Him: “Don’t!  Somebody done made a fake facbook thing about giving out free Corona shit and now people up here won’t leave!”

Him: “Yeah, they just called the cops, but that mean we won’t be able to do the meeting tonight.  We will reschedule or something.”

Him: “Yeah, crazy.  We trying to find out who did it, but nobody can find the post now.”

Me: “Yeah, and I don’t fancy dealing with any police, I am turning back to the house now.”

I turned around and drove away from the church so as to not pass by it and possibly be seen, before speeding back to my side of town and immediately blocking his phone number and all social media platforms.

We’ll let this be a lesson for trying to finesse me with pyramid scheme money.