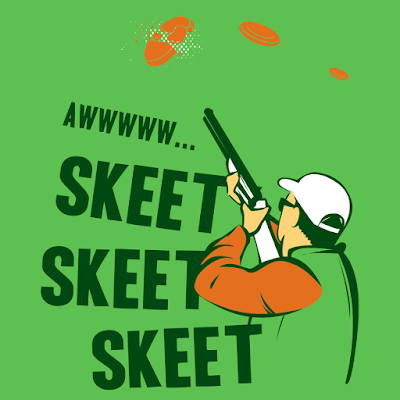 Another Thursday morning, another instance of me explaining where the hell I have been for the previous couple of weeks.

The short answer, here, is “in Japan.”

The long answer is the one you’re getting though, and it perfectly aligns with the “menagerie of shit that could only happen to me” that you’ve become accustomed to.

This all started back in late April with a phone call…

Caller: “Correct, sir and we’re calling in reference to--…”

Me: “And you’re aware that the last time I participated in any organized sport was 80 pounds ago, right?”

Caller: “Well we’ve been recently advised of your RECENT prowess, and this is in an event that doesn’t necessarily require athletic acumen.”

Me: “This should be good.  Which event?”

Caller: “Did I say something wrong?”

Me: “I don’t think my particular skeet shooting ability is quite what you’re looking for.”

Caller: “We’re told you’re one of the best.”

Caller: “Worried about time away from work?  We have an in with the US Government to liaison with your employer for the time off.”

Caller: “… financial?  We have sponsors out the wazoo, we can get you there!”

By this point, it is becoming clear to me that I am basically wasting my time trying to resist or explaining why I am not what they’re after.

Me: “My passport expired November 2019, then Covid happened last year.”

Caller: “No worries, we will fast track your renewal!”

Me: “Well it is clearly clear that you want me in the skeet shooting competition.”

Caller: “Verily.  I will send one of our people by with the paperwork and everything we need.”

Not to let y’all in on anything you don’t need to know about me, but I am not experienced enough a shooter to trust my ability to hit a moving clay target.  To be completely honest, I didn’t feel at the time that it would be necessary to even bother getting up to speed on it.  Surely, by the time July rolls around, they would realize the error of even bothering me about it again.
Still, though, they came by and had me sign all kinds of paperwork and took my passport picture right in my own house.

I repeat, at no point did I expect that I would be put on that plane to Japan, NEVER.  They were supposed to realize I’m just a random fat dude and would be of no real use to them.  Surely, a mature voice in the room would pull their coattails to this, right?
RIGHT?!!?
Wrong™!

My passport arrived in two weeks (!!!), and there was a constant stream of sponsored swag and mail in reference to my forthcoming departure.  There were constant check-ins to make sure of my vaccination status and in reference to how my training was going.  If they had asked specifics about the training, I might have gotten out of this whole ordeal.
My manager seemed spooked to inform me that I would be getting off the weeks of the Olympics no problem and that the decision had come down from CEO level to code it like I was on a military assignment and therefore paid in full.  It was weird.

Okay, so now it is time to leave for The Land of the Rising Sun.  I am off work and all of my financial obligations are in order.  I guess if I’m gonna be made to go to the Olympics despite my only athletic ability being a serviceable jumpshot, I should make the most of it.

My transporter – who also happened to be the gentleman who called me in April – arrived in a van.
Still trying not to waste any more of these people’s time or money on me, I tried to explain my way out of it…

Me: (smirks) “Hell yeah, but that doesn’t mean what you think it does.”

Me: “I drink a gallon or two of water every day.”

Me: “And my medications/supplements include zinc.  Believe it or not, that helps too.”

Rep: “I’ve always admired you guys.  I never had the physical ability to be an athlete.  I was more an analytics guy, comfortable in the office.”

Ten more minutes of uncomfortable silence, and we were at the airport.  A connector flight to Atlanta and then San Diego, and I was in Japan for the first time in my life.
In the back of my mind, I know this will end catastrophically.

I’m corralled into a meeting, where expectations and the rules of the Olympic Village are set.  We were told where to acquire food and beverage, explained where we could and couldn’t go and given printed schedules of where we would need to be and when.

After the meeting, the shooting coach pulled me aside…

Me: “I know.  It is because I am really not supposed to be here.”

Coach: “Someone sought and qualified you to be here.  You’re SUPPOSED to be here.”

Coach: “Well I’ll have your equipment ready, you’re up on Sunday.  Get some rest, I know there is heavy jetlag if you’re coming from the east coast.”

Me: “But I have been trying to tell everyone that we probably don’t mean the same thing when it comes to skeet shooting.”

Coach: “Again…  Someone thought enough of you to spend a ton of time and effort to get you here, so you do what YOU feel is the way.”

Me: “Distance or volume?”

So Friday I chill in the Olympic village with the people from “brown” countries, learning obscenities in languages I have never even heard of.  Saturday, I did a little day drinking with the eastern Europeans.  The Olympic village was really like a lit-ass party.  I was having the time of my life.
So now it is Sunday.  I am awakened early to prepare.  While everyone else had their rifles out, shooting and shooting and shooting, I had never even uncased mine.  I just sat in a lawn chair drinking copious amounts of water.  One guy walked by and asked “what the fuck are you doing?” to which I responded “I was told to do this my way, and I am shooting for volume.”  He walked away with the most confused look on his face.  Practice was over, we went to eat and relax just a bit before we were up.

In what seemed like no time, we were lined up and ready to roll…
“New guy, you’re up!” was yelled my direction in what felt like no time but was honestly almost an hour.  “What do I do?” I asked nervously and the coach responds with “I told you, just do your thing!”

On the way to the stand, I stripped off my pants and I heard a voice sounding like the coach say “oh… shit.  SKEET shooting!?” and just before I could make it to where I would appear on NBC’s live broadcast with my dinkus out, I was whisked away by the stewards.

I hadn’t told anyone to look for me on TV because I was sure the whole time that I would eventually talk my way out of the mess I had made for myself.  Turns out a gametime decision after being gassed by those who’d spent three months misunderstanding what I was after was what got me out of it.

And there you have it.  EXACTLY where I have been for the last few weeks.  Let it be known that I fully expect an IRS audit or something behind this shenanigous bullshit.