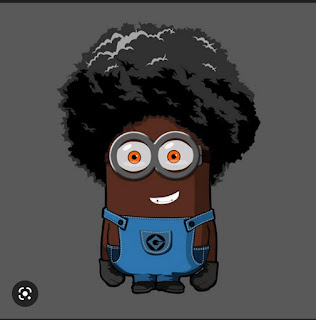 Despicable Me debuted in 2010…
As I was still yet 361 days from being a father at the time, it was a children’s movie that I was not interested in at the time.  The follow-ups arriving during the maelstrom of elements between 2011 and 2015 that will forever serve as my own supervillain origin story allowed me to manage to miss the whole of the series as it was coming along.  I mean, I knew it existed and was aware of the minions and their gibberish but I was busy having my life ruined.

As I exited the more depressive of my situations as a fully realized superfuckingvillain, I lacked time to go back and do the homework on that wrinkle of the subject.  I thought I had it down.
Thought…

With some time on my hands since the Thanksgiving weekend, I made way to watch the Despicable Me series.  In it, I learned that the Minions have existed since the beginning of time and have historically hitched their wagon to the biggest supervillain of any given time.

And here is where I merely only THOUGHT I was a supervillain.  ‘Fuck kind of villain can I be if I don’t have minons?
I am FAR behind the 8-ball, here.  I need to dig in, “go hard,” as the kids said last time I listened to the youths for slanguage.

Bear in mind that while my day job does quite well by me in the affordance of my general lifestyle.  This means I lack the monetary cushion of, say, a Batman villain or the moral depravity of Henry Kissinger.  Getting down to legitimate supervillainy is gonna take more than [redacted company] is setting out in salary for someone in my position.

I’mma have to hustle to get this shit moving…

I spent a few weeks digging through obituaries and--…  Hold it, I will explain that in detail in a minute.
I bought a GANG of sympathy cards at the dollar store and had business cards made for a spiritual medium, leading to Moe Phillips’ burner Google number.  When someone who I judged to be leaving behind some insurance money and family having as few voices of reason as possible, I’d drop one of the sympathy cards stuffed with one of the business cards.

As expected, calls from the very first batch of cards mailed led to almost immediate phone calls.  It turns out that people in mourning want answers that they honestly already have.  They just need a third party to confirm.  As I have read on the internet, I offered the vaguest assurances that their loved ones were in a better place and that things will be okay.  “Vaguest” is the operative word in that sentence.  The profitable outcome isn’t to make them feel good, but to sell them on the possibility of the warm fuzzies.
When asked for more, I explained that the consultation session is free, but every one to follow comes at a cost.

Having employed a classic cold-reading tactic of asking a barrage of generally non-invasive questions to get them talking helped me to feel out the mark client’s general desires.  A bonus is that I could get a general handle on how far I could work them for more money.  I kept detailed notes for each, so as to remain consistent with my own wording until I had bled them dry.  As the insurance money came near to running out, I would feed them some shit about the departed imploring them to move on and not let the loss hamper their lives and then I would block their numbers.

How well did this work?
In a word?  AMAZINGLY!
If not for my inability to abandon my conscience, I might have even attempted to create some religious organization to lend an air of legality to my scam, but I didn’t have the energy for such a thing.

So here I am…  I have taken widows/widowers, orphans and the generally aggrieved for every penny of their insurance money that they would part with.  I’m an UBERvillain now, right?

I should have at least earned the attention of some minions, right?  They're practically lining up to do my bidding at my beck and call, thus sparing me the time and bandwidth to plan our next missives, right?

Time to let y’all in on a little something…  Unless they specifically SAY that a movie is a documentary, then it is fictional.  That means that although the Minions were seen rolling a T-Rex – which existed – into a volcano, or letting a caveman – which existed – get eaten by a bear, or even blasting Napoleon – who existed – with a cannon; it was all bullshit placed forth for entertainment purposes.

All the theft, the scamming, the life-ruining…  Has it been for naught?  Perhaps so.
Does that mean I am putting the supervillainy to rest?  Fuck no!
Back to the drawing board.