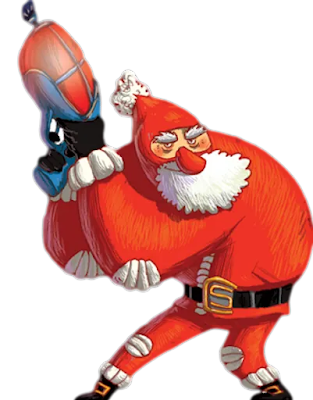 I don’t know if y’all know this but for about five years, me and Santa have had what the homies in Houston might call “plex.”
If you need to be brought up to speed, please pack a lunch and start here and spend a while.

So yeah…  I figured that Rudolph being down bad was a result of Santa’s abject shittiness and I wound up paying the price for shenanigously attempting to set things right on my own terms.  It has been four years since I learned a lesson so embarrassing that I sometimes still cry myself to sleep just thinking about it.  Part of me, though, wonders how I could have built a clandestine career as Supervillain Internacionale and still let a 1751 year-old fat man get the drop on me like that.

I had to get to the bottom of this.

[Phlip note: oh, y’all thought I was just gon’ let him punk me?]

I spent major time studying and researching how to reach The North Pole undetected and maybe – POSSIBLY – get a deeper peek into the fat man’s operations and then perhaps parlay that into a win of my own.
Planning out the way up undetected was a bitch…  I had to get there without a paper trail so as to not arouse the suspicions of any domestic or international authorities while also taking special care not to create digital breadcrumbs for anyone to chase me down after the fact.

I started by taking as much cash out of the bank as I possibly could.  I then got one of my nephews to buy and title a $900 beater I found on Craigslist.  I plugged my GPS-connected smart phone with the same number you’ve all had since 2001 to the outlet in my garage, killed ALL sound and vibration notifications and forwarded all calls to a burner flip phone.  To prepare the people who have known how to communicate with me for YEARS, I swallowed my general introversion and actually communicated via voice calls more than texts for 90 days before my planned departure.

Oh, departure!  I should talk about that, huh?  Well you will have to be patient and let me tell this damn story.

So yeah…  Departure…
Spending ONLY cash on gasoline all the way from NC to the Lost River State Forest in Minnesota, then I ditched the car at a random truck stop and hoofed it across the US/Canada border into Manitoba before I started thumbing my way to Winnipeg, then north to--...

Hol’up…  You know how on TV, they make it seem like Canadians are such decent people and shit?  Well when I say I “thumbed” my way across, and then up Canada, I mean I started walking and some random family stopped like “hey buddy, you need a lift?” and then when I explained I was trying to get to and through the Northwest Territory they STILL gave me the ride for as long as they could take me.
I start walking again and then a trucker offers the ride!  Needless to say, it was not at all difficult for me to make it FAR into Canuckistan without being robbed, raped or murdered in the face as if I likely would if I tried to do the same shit in the city I grew up in.  Hell, two of the good samaritans even offered me weed!

I will spare you to grueling slog of the Northwest Passage and everything between Canada and the North Pole.  Just know that I am here now to discuss it, meaning I survived the in and out of it.
Anway…  I made it to Santa’s village somehow undetected, I expected some kind of slaver’s village with overworked elves and reindeer being starved to subservience.  Y’know, free-market capitalism.

What I found was THOUSANDS of reindeer, maybe tens of thousands.  What I learned is that the elves are properly cared for and the work environment was so amazing that while they COULD be allowed to leave, they usually stay in the spot until retire and then move to the retirement village next door.

And Santa?
Thanks for asking!  Not Santa…  SantaS!  Why were there thousands of reindeer?  Because there were hundreds of Santas!  Everything I thought I knew about “Santa” in general was quite wrong.  If one Santa was dealing to one Rudolph, then that was on that one Santa and one Rudolph, whom I have now learned there are several of each.  What I was witnessing was that everything we thought we knew about Santa was wrong.  There is a year-round CIA-style Santa Training Program for both incoming and existing Santa Clauses.  Every iteration, every understanding of Santa for every kid around the world is actually REAL!  The training program sets them up for assholes like me and other potential bad actors who might try and treat them like the ops on Christmas Morning.  Up to and including footage of my attempted robbery Christmas 2017.
I was embarrassed to see the footage again, I will need to discuss it with my therapist next week.

In my embarrassment, I MIGHT have dropped a “mother fucker” and forgot not to say it out loud.

All of a sudden, EVERY Santa eye and every rifle in the building is trained on me.  Including the one now poking in my back.

“Ho-ho-ho-hands up” said the fat man and I complied.

Santa (look, it doesn’t even matter which one right now): “SPEAK!!!”

Santa: “Make this a good one, we know about you.”

Me: “I apologize.  I’mma keep it all the way funky with you, well, y’all.  I was here to stake out y’all’s shit on a recon/revenge mission…”

Me: “I been in here for three hours and I see what y’all are about.”

Me: “... and leave y’all to this good work you been doing all these years.”

Santa: “And have you seen ANYTHING in here today?”

Me (doing the Stevie Wonder head motion): “See?  See what?”

Santa: “And the supervillainy?”

Me: “Look, can you AT LEAST settle for ‘antihero’?”

Santa: “Can you at least settle for ‘naughty list’?”

Me: “Will my wife and kids suffer for it?”

Santa: “Only on the merits of their own behavior.”

Before I could finish my last sentence, a Christmas bag was placed over my head.  Before I could “aww shit, here we go again,” I was at home in my living room on Tuesday morning with the dogs and the fireplace crackling.  More stuff under the tree for the wife and girls than I have ever seen, even with 5 days yet remaining until the big day.

“Damn, the fat man/men looked out.  This ordeal is over and done with.”