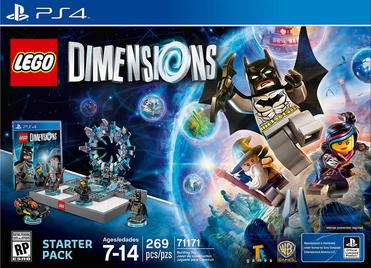 
Lego Dimensions: the most brilliant video game/toy idea in YEARS.  (AKA "shut up and take my money!")

Imagine you had the ability to play a video game tying a bespoke story involving characters from The Simpsons, DC Universe, Ghostbusters, The Lego Movie, Scooby Doo and 8 other franchises that Lego has licensing for currently ALL AT ONCE.  Imagine further that this particular game would be expandable by purchasing Lego toys.  Well stop imagining, because that is PRECISELY what this is.
It is a concept they have referred to as "toys-to-life," wherein you buy the game in a "Starter Pack" which contains a ton of toys already, and then you add onto the game with subsequent toys, which you can immediately add to the game.

You buy a "Fun Pack" and you get the physical toy set and the pieces in that set are added to the game, characters and vehicles.  Buy a "Team Pack" and it adds characters, vehicles and gadgets to the game.  You buy a "Level Pack" and it adds entire levels to the game, more characters, more vehicles and more gadgets.
The buy-in seemed high to me at first before realizing how much extra stuff physically comes with the game and the expansions.  The price is well balanced once one considers the amount of new Lego toys they receive with each expansion (or that they get an expansion with toy purchases -- look at that as you see fit).

Expansions are to be released in waves, looking as far out as about May of 2016, but it doesn't seem foreign to me that this could continue on ad  infinitum, considering Lego is constantly being tied in with other franchises and this would be an amazingly simple cash grab for them, considering that the packs don't NECESSARILY require that one give a damn about gaming to purchase since they don't saddle one with a physical disc or anything.

My copy arrived today after 4 and a half weeks of me talking myself out of it but unable to resist, and this is going to be MAJOR fun for my daughter and I on two fronts for a long time to come.
daddy duty lego take my money toys video games