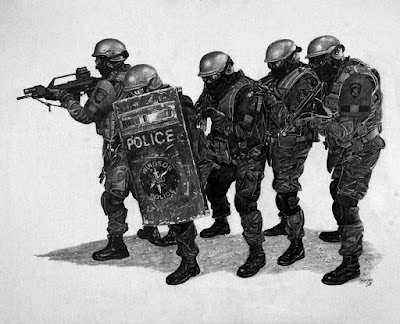 I don’t bother anybody.

This all starts back in late September/early October.  Wife person had taken a shine to USING the thousands of dollars (I see the shipments, woman!) of essential oils that she had been collecting like Infinity Stones on aromatherapy products.  Bracelets, diffuser blends, etc…  Nothing terribly out of sorts, and she was clearing her money spent so I had nothing to worry with.  She was back in her office and quiet.

If anyone knows the “Phlip’s wife has a new hobby” dynamic, they know that once her obsession grows, Phlip doesn’t get to sit down.  Like ever.
So now it is October 17th, a Saturday.  I cooked chicken wings and got drunk, she raided the kitchen cabinets and went to her office to create.  I wake up Sunday morning.  I should have known something was awry when she was awake before me…

Wife Person: “You need to take a shower.”

Me: “Well good morning to you too.”

Wife Person: “You need to take a shower.”

She was handing me something.

Wife Person: “A shower melt.  I have lavender and I have menthol.”

Me: “Because I am agent of chaos?”

Wife Person: “Just put it in the shower floor, it will melt in the steam and water, releasing the smells to open you up a little.”

Me: “Or calm me with the lavender.”

Me: “Why do I feel this will never end?”

Wife Person: “Just get in the damn shower!”

This Sunday morning would be my first as a lab animal.  I was forced at gunpoint to not only take the shower, but to sit and write a review on Facebook.
When the review took off I was forced, now at BIGGER gunpoint, to figure out how to package them for sale and distribution.
When the word got out about them, she established an ordering and invoicing system and continued to drag me kicking and screaming into a business that began from a hobby that started while I was comfortably drunksleep on October 17th.

Packaging changes, shipping arrangements, perfecting the recipe…  This hobby of hers will be the death of me yet.  Everyone, it seems, wanted some of these damn things!  We were going through baking soda and corn starch like nobody’s business.  As the designated risk-taker during these Rona times, as in the one normally chosen to go to and in the grocery store, it was becoming nothing in particular for me to go into the Wal Marts and clear the shelf of the $0.46/box baking soda more than once or twice a week.
Not to let you in on any more than you need to know about me, but I live in the 68th most populous city in the United States.  Even medium-sized cities are “small” when people talk too fucking much about things that don’t concern them.

So back to my smallish house, “normal” car and un-extravagant lifestyle…
My house is also walking distance – legitimately less than a mile – from my grocery stores.  That said, the people in the stores are accustomed to seeing me and my whimsical Rona face coverings several times a week.  November and December began the time when I started buying a ton of baking soda to get in the Christmas time orders and such.  I wasn’t buying flour and chocolate chips, so anyone with some sense would know I wasn’t coming home and baking cookies.
Now I tend to work my grocery stops into the end of another further-out field trip.  Given the proximity and location of my house, it is nothing for someone to pull out of the store behind me and remain behind me until I back into my driveway.  Again, I ain’t nobody as it is anyway, so why would anyone be following me?  I failed to notice one such instance after a large-ish haul of baking soda one Saturday morning on my way in from the barber shop.  All that to say that I didn’t notice the car driving off a little slower than normal around me as I got out of the car into the house.

So now it was New Year’s Day, right?
We had not been out partying or anything like that, I just woke up with nothing to do really and a clean house.  I went to the store and bought ten pound of baking soda and five pounds of corn starch.  It was early morning, so I was using self-checkout.  The assistant manager looked especially weird and animated on the phone at the customer service desk, gesturing and pointing and shit.  But this is Wal Mart, so I thought nothing of it at all.

Back home, I neatly arrange the items on top of the fridge and turn to take the now-awake dogs out.  When they’re both up, I tend to take the old man out before the puppy because that little one tends to fucking take forever.  So out and back in with Bruiser in no time flat.  Now I am wandering about the yard with Thunder when FOUR unmarked cop cars pull in front of my house and nine officers jump out with guns drawn.

Me: “His shots are current, I have the paperwork.”

Cop 1: “Who is the dope dealer we’ve been hearing about around here?”

Me: “Gentlemen, I don’t want to be a hashtag.  I am just a bearded fatman with a puppy.”

Cop 3: “…  who is also on surveillance buying 10 pounds of baking soda at a time.  You running a cook house here?”

Me: “Sir!  My dogs weigh 12 and 15 pounds.  Everyone knows you get a half-starved pit bull or a Rottweiler for a cook house.”

Cop 4: “Knowing this isn’t helping you.”

Me: “Look, I have seen hood movies and those early-00s criminal DVDs.”

Cop 1: “Not until you tell us what you’re packaging in this picture.” 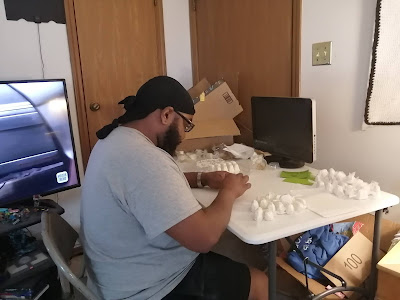 Me: “Dammit, this woman will get me killed yet.”

What commenced was an exhausting rehashing of what the damned things are and what they’re for.  I even walked them over to the blinds-up window (Thunder likes to look out and has learned to move the blinds up himself) at the table I am seated at in the picture, where there were still dozens of shower melts waiting to be wrapped.
Cop #7 even complained of chest congestion JUST as the person trying to get me smoked my wife walked outside to investigate the commotion.

Wife Person: “Oh, I have something for that.  The Menthol Eucalyptus should get you right.”

The other cops departed, leaving only 6 and 7 to complete their transaction.  Apparently, he has ordered once weekly since.

Funny how things work out sometimes.  When I find out who is stalking my BookFace and reporting me to the authorities, though?  Look out below, motherfucker!