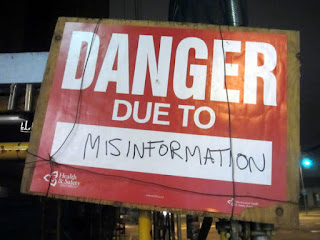 Being that I work in Tech Support, I am in position to answer WILDLY dumb questions.  Wait, let me pull back a second.  I won’t call them dumb, but the fact remains that from time to time the questions and problems presented come out in a manner where even the person who asked it has to back up like “damn, I shouldn’t have asked that.”
But they don’t…  The fact of the matter is that they’re fully justified in their not knowing of shit that they SHOULD know to do the simplest tasks of their job and need it to be someone else’s problem often.

But it pays the bills, so I sit at my desk with my music and do this shit.
When I leave, though?  I have no patience for stupid or poorly-thought-out questions, and because no one is paying me to answer them, I often present enough snark and on-purpose misinformation to properly punish the insolent for the misgivings.
This is especially fun on the first of every month ever since I decided to declare the first “[Month] fools day,” not leaving it only in the month of April.  Shit, sometimes the best April fools prank can be played on someone on September first, since they’re not conditioned not to trusty anyone and their bullshit in the late summer as they are in early spring.

Outside of work, I tend to know a lot about a lot as well so sometimes I get phone calls (which I fucking HATE) requesting information that could have been located with a perfunctory Google search and since I generally have no fiduciary responsibility or personal reason to give a good answer to someone who couldn’t be bothered to go get one, I generally tend to lay it on super thick.

So one day a few years ago – fall 2014 to be exact, I remember it because I had just gotten back from a weekend in Atlanta where I had stayed within walking distance of the CDC – I was joking the shit out of people panicking because they KNEW that Ebola was coming for them since someone got off a plane with it in the United States and one person even died.  I tried once to explain that the only person who had died was someone not born in the US who caught it from someone who had treated someone with it, which is the EXACT same way that everyone else who brought it into America had gotten it.  This came with the “this is nothing new, Ebola has been around for 40 years or more” explanation and THAT is when she perked up…

Me: “Yeah, that is the funniest part about all of this.”

Her: “Well how come it is getting so much press now?”

Me: “Because of the changing times…  They’re using it!”

Me: “The same ‘they’ that the world always talks about.  ‘They’ in charge.”

Me: “All I’m saying is that it has been around and contained enough to a region for 40 years, no international outbreaks, and--…”

Me: “Because they’re in Africa, where people tend to be less healthy and therefore won’t have the immune system to survive it.”

Now I had her attention but she still doesn’t understand.  I’m going into exploitation mode.

Me: “Because they’re damned heathens.”

Me: “’Ebola’ has some long confusing name scientifically that I ain't about to try to pronounce right now.  The name we’ve been calling it is slang, an acronym.”

Me: “Eating Booty Or Licking Ass.  See, that is one of the ways to get it from someone who has it, and people who do those things as a sexual act are at risk.”

And she ACCEPTED this shit, didn’t bother to question me or Google it, or attempt to verify it herself before spreading it like it was the God’s honest gospel.  I guess that speaks to me confidence and poker face when telling a story such as the one I had just made up on the spot.  I have done this shit dozens of times with dozens of topics, but this is the one that almost blew my cover.  For six more months or so, I had to have heard “eating booty or licking ass” at least once every other day or so and had to FORCE myself not to laugh every time I heard it.
don't trust a soul ebola true story