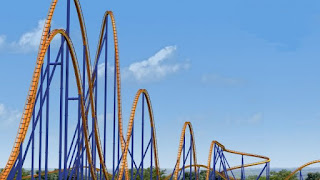 My life is a weird set of ups and downs…
For the sake of that sentence, by “my life,” I mean “my weight.”  I seem to be on this odd cycle where I will decide to get to it and lose several pounds, then something catastrophic will happen and I stop even bothering for a couple of years and gain the whole 50 back.

My last “gain” phase almost took me to the upper room.  Apparently putting on this time sent my blood pressure to a level that my then-current medication regimen wasn’t on board with and, then a bout of bronchitis made it all worst and next thing you know I am speaking to a cardiologist trying to convince me to spend a weekend in the hospital due to congestive heart failure.
I was 306 pounds that morning, 35ish more than expected walking in and a full 55 more than my “norm.”
I was mobile enough to get to and from my car, care for my kid and not miss a minute of work, so the man couldn’t FORCE me to the ER.  He did change up my meds aggressively to get the fluid off of me and down to a comfortable weight and allow me to work it down from there.  6 months later, he was pleased with my heart function and left me to my own devices in losing – or at least maintaining – my weight.

Well…  I rode it out for quite a while, about 7 months.  Over this past summer, my lady looked into different ways of eating and recipes that would allow us to eat as we tend to like to do, but more healthily since substitutions all but eliminated carbs and sugar from what we take in.  It was very effective, seeing me lose about 15 pounds in a couple of months, but unfortunately hovering around that number for the remainder of the year because we would phase in and out of it.

End of the year comes, we decided that there would be no extended breaks (sure… a day here, a weekend there, vacation away from it all for a few days).  With that ALSO came me finally having the time on my hands to get out and exercise.  Needless to say, I am drastically shrinking pretty noticeably quickly and sticking to the plan of ramping it up when my weight loss stalls.
With visible weight loss in a world of people who want to lose weight but would rather get in on the next fad than to actually eat right and get a reasonable amount of exercise comes the questions from said people.

“Well what are you doing?”
“Is the diet online somewhere?”
“Is it expensive?”
“All that walking and running, you don’t hurt?”

The first little while, I explained what was happening and that walking for 30-45 minutes a day is low impact and goes right by with the right music.  We spend LESS on groceries like this than we did when we could eat anything we wanted.  Simple explanations, no?

“I just don’t know, eating healthy is so hard”
“I don’t really have time to cook like that”
“I just couldn’t imagine giving up [….]”
“Isn’t there just like some kind of shake I could drink?”

I don’t fancy having my time wasted, so sometime mid-March I stopped answering questions honestly and started just making shit up.

One Monday, I am heating up my breakfast and a lady notices I have shed a few ounces and asks what I am having.  I described it and how it came to be, how easy it was to make and such.  After I get the normal shtick about how unimaginable it is that such a diet could work, I continued without missing a beat.

“Well, I had a bit of a head start.  See, I went on this ‘food vacation’ with my girlfriend where we basically travelled and ate food from the locales where we landed.  We ate street tacos in Mexico, empenadas all over the Caribbean and like 5 other things I can’t pronounce in Asia.  The mistake was that we drank the local water and I had amoebic dysentery for a week and a half, I was puking my guts out from both ends and lost 20 pounds before I ever left the hospital and another 10 when I came home because I couldn’t stomach anything.”

The look on her face was such mortified horror that I didn’t even get a chance to continue “I’m kidding” after I chuckled a bit while and just after saying it.  She has not spoken to, or even looked at me, in the 6 weeks since.

A couple of weeks later, this woman notices I had been walking on my lunch breaks, even if it was BRUTALLY cold out and could see the weight coming off.  She asked if walking was the only thing I was doing or if I was on some kind of supplement (magic pills, again).
For this one, I paraphrased an episode of Aqua Teen Hunger Force…

“Yeah, you oughta hop on my diet. Started it eight days ago and I'm already halfway to my target weight.”

She looked at me interested and asked for more information, which I HAPPILY obliged.

"South Bronx Paradise Diet, baby! Yeeeeah! The twist is you eat MORE than you want, then you supplement that with this special candy bar.”

[Note: it is IMPORTANT when you’re putting someone on to keep a straight face the whole time]

Now completely sold, she asks for more information or a picture so she could find it on her own. I told her I would take a pic when I was back at my desk and send it to her later, and took her number.
20 minutes later, I sent her this picture:

I walk past this woman every time I walk on a lunch break now and she will always look the other way (like head and shoulders turned) if she doesn’t cross the street as I approach. I really wish I would have remembered in the moment to tell her my name was Moe Phillips though.

I am always out for new and more innovative ways to fuck with people who have committed nothing more than the cardinal sin of being annoying to me. The best thing is using the world as my unwitting test subjects.
health and fitness storytelling true story