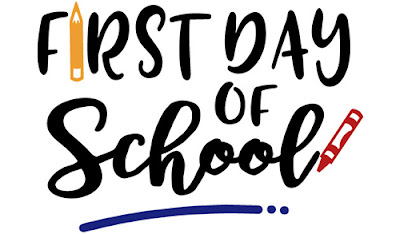 As both of you know from a previous post, my daughter is nine years of age.
Factoring in one year of Pre-K, one of Kindergarten and three years of grade school in my rear view, this Monday was due to be my sixth swing at this “first day of school” thing.  Then back after I got home from Vegas on Super Bowl Sunday, the whole Wuhan Bat Flu™ thing hit the states and a failure of nationwide leadership served it that six weeks later that all the kids would finish the school year in the crib with their newly-working-from-home parental units.  A summer spent handling things not much better wound up meaning that STILL working-from-home parents like myself would be also helping to facilitate virtual learning with their students close by during work days.

This story is not about that, but it helps to frame the “why” of it all.  Also, big shout to Khan Academy, DuoLingo and Read Theory for keeping my baby sharp over the summer coming into 4th grade.

Anyway…
I wasn’t sure HOW this whole school thing would go and my child is FULLY in the middle of a several-months-long growth spurt – like to the point where the shoes I bought her for school two weeks before they were sent home didn’t fit anymore within weeks – so I refrained from blowing the bank on new school clothes (yet).  We stocked up on clothes that she would be able to wear throughout the summer and not-school-uniform-approved shoes though.
…  I also bought a ton of shit for myself.  A few new pairs of shoes, several new wristwatches, a few shirts and a couple of pairs of pants.  The shirts and pants had as much to do with weight loss as it did with me wanting new shit.  The shoes and watches, though, were because we couldn’t afford those things growing up and now I can.  Late in the summer, it was confirm-confirmed that the kids would be home doing remote for at least the first several weeks of the school year.

For the first time of six tries, I would be left without my standard “first day of school with daddy” picture that I always take.  Her mother and I are not together anymore, so even if the first day falls on a week that she is not in my custody, I show up and TAKE that picture, even if it is the only reason I do.
Rona got things so fucked up in these streets that only one parent per student was allowed to meet with the teacher to collect necessities like books and school-issued computers and such and her mother volunteered to have that chunk of her morning eaten on Monday.

I was empty…
My current wife, herself a teacher and working remotely for the time being, came into my office in the front room…

[Phlip note: I STILL can’t believe I directed someone – anyone – to  cover their titties]

Okay, so within about three miles of my house, there are six elementary schools, two middle schools and Ava’s old pre-k building.  For the sake of wonder, we will not bother with the fact that three of the elementary schools are closed due to an April 2018 tornado that exposed how out-of-code they were and now has the city deciding how best to go about removing them.  Anyway…  There are those eight schools, one middle school and one high school all right around the way.  I know for fact that the only people in the buildings will be employees of said schools for the most part and I would not run the risk of making any children sick anyway because the president said kids are immune I was tested negative just Saturday.
When wife person emerged from the back room, titties properly contained for facing the outside world I had already changed to a new pair of jeans she had seen plus a watch, shirt and shoes that she had not.  The only thing missing was that my barber shop appointment is this coming Saturday.

Someone will teach this woman to be careful what she wishes for.  We started closeby and fanned out.  I began with the schools that are not currently closed and boarded up.  I pulled up on my old middle school and parked my car right in front of the sign and told her to get out.  I unlocked my phone and opened the camera before handing it to her, scurried over to the sign and knelt in front of it like I was taking a picture for a prison dating site on Love After Lockup.
She shook her head, but took pictures every time I changed stances.  Next, across the street to the high school, then down to the end of the block to the elementary school.  Bear in mind that NOBODY was outside of the schools because no one was to be welcoming any students anyway.

We were at our next stop.  This one is on a VERY main road and even the sign is behind a weird wrought iron fence, but in an open parking lot.  So in we go!  More prison poses and more pictures taken.  Still, I have literally only driven 4 miles and haven’t gone further from my car than would cause me to consider even cutting it off to have to restart.

I was rudely interrupted by a school resource officer questioning what in the fuck I was doing on school property wherein no children were yet being admitted.  My better question, however, was why the fuck did HE even need to be on school grounds not protecting children that were not yet being admitting from school shootings he would sooner cower under a desk than to protect them from in the first place.  Rather than be a black man who had an interaction with ANY cop, we got in the car and high fucking tailed it out of there.

We arrived back home in time for my ex to drop my daughter back off at the house, still only having spent 20 minutes out of the house anyway.
Daughter sits at her desk and sets up her workspace.  I sit at my desk and pretend that I hadn’t just gone off on one of my stupid adventures on the clock…
…  then the dogs go nuts as someone walks down my driveway and knocks on the door.

I had seen the car pull up and knew who it was, but that fact was none of their business.

I hadn’t done anything necessarily illegal, and I have all the time in the world if I’m going to be out in the world having adventures and shit.  I will entertain captain fuckshit here.  I stepped out onto the porch…

Just then the door bursts open.  My wife pushes me aside and, being a former probation officer and current school teacher, was familiar with both the officers’ superior as well as the school in question’s administrator.
She explained it all off to the spoils of being married to a creative jackass and the three of them shared a collection of laughs at my expense before the officers got back into their cruiser and left and then she came back into the house.

It has been three days and she still ain’t speaking to me.  I should have just opted for the photo shoot at one of the closed schools or PROBABLY the one my wife works at.
adventures back to school married life photo phun road trip rona life shine on them hoes showing off true story wuhan bat flu