True Story©... The Floor Is Lava 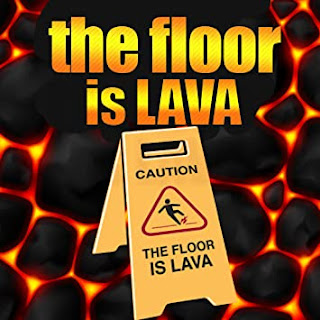 Rona life has made shit super weird this spring and summer.  One good thing to come of this is that having to wear a mask everywhere has allowed me to operate as NOBODY, as opposed to having to employ Moe Phillips when I need to complete my shenanigous behaviors.  No one sees the whole of my face and beard, and lord knows if I wear a hat, I could rob a fucking bank.
Don’t worry, I fear prison rape FAR too much to actually go out and commit felonies.

One thing I have discovered in my not having left the house is The Floor is Lava on Netflix.  My interest had more to do with having played some version of the game as a kid in my grandma’s house in the enormous den downstairs.
It should be said that Rutledge Wood is as bad on this show as he was on Top Gear America, and if I had the option or duty to regularly leave my house, I might not have bothered watching the show if not for him alone.

Naturally, I am not in my house glued to my television all the time.  Sometimes I must venture out for supplies, food, or something for the garden.
My constant need to find fun in things mixed with the anonymity of having to wear a mask everywhere I go gave me an idea for some good ol’ fuckery.

When the mall opened back up in June, I decided I would likely be able to scare up a good deal on some new sweats and ran in for a couple of minutes to complete said task.  When I got to Champs Sports, it was readily apparent that I was not the only one using the newly-reopened mall as a means to get out of the house for a few minutes.  The number of congregated people leaned on my anxiety…
“Attention everybody, the floor is lava!” I shouted.  As I expected, it was pandemonium.  People climbed on fixtures and jumped from bench to display to bench and eventually tumbled out the door.  I calmly strolled over and grabbed a new pair of sweats on clearance and then to the register where the clerk was still on her knees up on the counter.  She looked at me and asked “why did you do that?” to which I replied “shit, I didn’t think it would work.  Fun ain’t it?”

Now I have a new “thing” I can employ for crowd control or for my own entertainment.
Lord knows where I am taking this shit…

As mentioned above, I need to escape the house from time to time and Wal Mart is often my escape, if only to grab something for the vegetable garden or the puppy or a 6-pack or SOMETHING.  Anything to be outside of the house for an hour.  I noticed that what was once the online order pickup is empty until layaway season comes alive, and it is RIGHT next to the bathrooms so it doesn’t send up a red flag to security for someone to beeline back there.  While washing my hands like a responsible citizen, I had my idea.
I went to the counter and grabbed the phone, pressed the button to make a storewide announcement.

When I wiped my prints off the phone and exited the layaway area, I was faced with absolute pande-fuckin-monium!  People on tables and climbing up racks and literally STANDING in freezer cases.  One old Asian lady had fainted and no one could attend to her for fear that they would perish with her in on the molten lava floor.  One little girl, separated from her mother, looked at me and asked how I was so calm and not afraid of the lava floor.  I pointed down and said “see?  Lava-proof moonboots.  You should get you some!”
The two remaining open cashiers were seated atop their bag carousels and (naturally) not ringing out the customers who were on the conveyor belts with the items they intended to purchase.
Nothing in this store was anything that should be described as “normal.”  One could say that I had started a riot, or had yelled “fire” in a theater if theaters would be open again any time in 2020.  Now having realized that, even though in a mask and having wiped my prints off the phone, I figured I should get the fuck out of this store.  It is a good thing I went to the one on the north side and not my end of town.  When I got outside on the way to the car it became obvious that my “flee” instinct was indeed the right call, as there were fire and police sirens SCREAMING toward the store.

Note to self: area Wal Marts are probably onto this shit, don’t try them again.

Okay, I’mma have to get creative if I want to continue this shit.  My FaceBook feed is filled with rumors of some asshole challenging an unsuspecting city to a game of The Floor is Lava and setting off chaos.  I decided to channel my inner Fred Cain (ß don’t click that at work) if I want this to work.  In the mornings without any real sports, I watched the local news to get a feel of whereabout they might be during the days and try to finesse my way in front of a camera, mask on of course.

On Tuesdays, the church across the street was offering boxes of produce for free to the community while supplies lasted and the line was out the parking lot and visible from my desk in front of my house.  I struck out on lunch and noticed the news truck out there covering this selfless act of community service.
I had my in…
The next Tuesday I slid in and, appearing to be a volunteer, was approached by the news cameras after the veggies were all gone and I was walking back toward the house.

Needless to say, she was not amused with me, and there was very little to be done about it since I was mask on and wearing a bucket hat to shield me from the sun out there that day.  Instead of walking directly to my house, I circled around the block and approached from the back of the house through the park behind me.  Again, FaceBook was WIDE-ass open about it, with people speculating on who exactly it was out here acting an ass in these Rona Streets.  The reporter was on and still apologizing after speaking with someone who actually did work at the church.

Like the above-mentioned Fred Cain, my antics sparked a bunch of copycat killers.  It escalated to the point of people commandeering the intercom at recently-reopened restaurants and doing it.  The worst of it was when three 14 year-olds called the city nonemergency number and tried it, only to have the call traced to one’s dad’s cell phone and HE got jacked the fuck up for it an hour later.

“This game isn’t fun anymore.”
[Phlip Note: said that before]

Still, my FB feed was rife with people trying to CSI the initial culprit, but it had been made such a lame thing in the hands of people who cannot properly think things through, that I wouldn’t have owned up to the shit if I had to.

I really need to come up with better ways to pass the time before someone gets hurt.
boredom game time riot starter true story