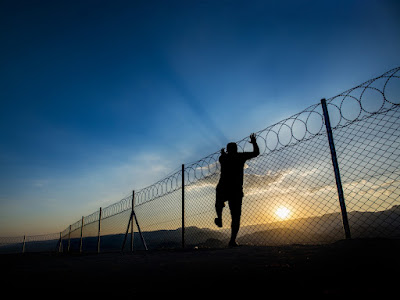 For those keeping score at home, back in 2017 I attempted to make a movie.  I was wrong as shit, using little people labor and never explaining to them what it was I was up to in the moment.  In my own bit of karmic comeuppance, I saw the whole thing literally go up in smoke and almost cost me my whole damned shirt in the process…
…  almost…
Small (pun totally intended) details in the background saved my ass legally and civilly.

But in the real-real world, I was still found.  Three years ago next week, I was located by one of the involved little parties and accosted for ideas for an “out.”  Just my fucking luck, I know.
I cooked up a quick scheme to get him out of his (and my) own way and all is well, right?
RIGHT?!!?

I.ve often joked about the FBI agent across the street from my house in the woods.  I no longer live across the street from the woods now.  During work hours, I sit in front of a large window at the end of my driveway and post funny memes on FaceBook.  Off-hours, I sit in front of a different large window in my living room and post funny memes on FaceBook. I say that to say that I spend most of my time in the front of the house facing the street.  Almost two months in here, I am pretty much sure of what automobiles belong to whom (and their normal company as well).

So there’s this strange silver Honda I have been seeing when I come in from dropping the little off at school that I THOUGHT I had seen outside the old house.  One thing I didn’t have to deal with at the old house, though, was bus traffic so I figured it was just a parent waiting on the bus with their kid in the now-cold weather and thought nothing of it.
Until I was presented with a reason to think something of it…

I come in, as usual, at ten til 8, enough time to make a cup of coffee and get logged in.  I hop out the truck with the shaggy dog under my arm and unlock the door, then lock the screen door behind me so the boys can sun themselves in the living room while I work downstairs.
No sooner than I get comfortable at my desk, the doorbell chimes on my phone and I am looking at the driver of the Accord – now parked in front of my house – through the open blinds in front of me as well as on the screen of my phone.

Well shit, maybe she HASN’T just been putting a kid on the bus.

Lady: “That one you posted about sober you having to answer for what drunk you--…”

She produces a badge…

Lady: “Agent [redacted].  Congrats on the new house, by the way...  Lovely neighborhood.”

Agent: “Don’t act surprised, you’re not joking when you say I’ve been watching you for years.”

Agent: “Not if you play along nicely.”

Me: “Nicely with what?  I don’t recall having done shit!”

Agent: “Well it is not you we’re after.”

Me: “Aight, well since you put it like that I’mma g’head and get back to work downstairs.”

Agent: “Not so fast, unless you WANT it to be you we’re after.”

Agent: “Approximately one year ago, our office received a tip about potential insurance fraud as it relates to--…”

Me: “They cleared me, I got the paperwork!”

Agent: “I know…  When the fraud was cleared, there was still a criminal case as it related to the cause of the fire.”

Agent: “I’d rather not.  Anyway, it seems that the individual in question made a mostly-clean escape somewhere down south, where his car was found torched near Miami.”

Me: “Maybe he went and got a Brazilian butt lift?”

Agent: “Anyway…  We have reason to believe that the individual contacted you or someone close to you before falling off of the radar.”

Me: “And what reason would that be?”

Agent: “Well the fact that your cell phones pinged off of the exact same tower on the last day anyone had eyes on him.”

Me: “But Greensboro ain’t even big!”

Agent: “It means you know his likely whereabouts or destination.”

Me: “Didn’t you say they found the car burned out in Miami?”

Me: “And we’re here, eight hundred miles from Miami--…”

Agent: “… and this is the part where you tell me where he was headed.”

Me: “Is there not a chance he was robbed, or perhaps his car was used in some Burn Notice shit?”

Me: “You never watched Burn Notice?  Man, there is all KINDS of explosions and burned out cars and shit all over Miami!”

Agent: “You can’t be serious.”

Me: “I’ve seen every episode several times.  You may wanna look up Sam Axe and Jesse Porter and see if they can help, Michael and Fiona escaped to Ireland.”

Agent: “You know that is fictional, right?”

Agent: “You’re a special one.”

Me: “So I’ve heard. If there isn’t a warrant, you may leave my property now, and my wife has a recording of this little exchange on the doorbell camera if you plan to spirit me back to Guantanamo.”

And with that, she was off of my property.
Luckily, I had not collected any contact information on my little friend and have spent the last year not giving a fuck where he wound up.  I am here secretly hoping that he chose Cuba over The Bahamas, as Cuba ain’t letting nobody in to come and haul him off.  Either way, if they'd had much of shit with any material value to the case, she'd have had a warrant and we would currently be on day three of them waterboarding me at a blacksite.

Meanwhile, I gotta keep my eye on that fucking Accord on the corner now.  Somehow this shit doesn't feel "over."