Black Panther; Everything I Expected 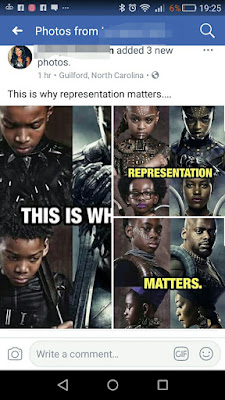 If you sat around all weekend saying “what’s the big deal?” or drawing Straw Man arguments about Blade, Spawn, Catwoman (lmao), or whatever other black comic superhero you could pull out of your ass then you either just don’t get it or were a huge part of the problem in general.
Black Panther was everything!
The images were beautiful, the costumes were wonderful (and apparently contained coded messages themselves), the casting was par excellence, and the action was beyond engrossing.

But see the above-displayed image I cribbed from a buddy’s FB with her permission…
Black boys got to see people who looked like them as warriors and strong royal family members.  Black girls got to see themselves represented as an even STRONGER group of warriors and not harlots.  The young lady above took her daughter to the movie and the first thing she said was “look mommy, they have hair like mine!”  Representation is SUPER important, the power of seeing yourself in something positive for a change can be the difference between a $170m opening weekend and a $200m one.
And no, Tyler Perry is not the "representation" we have deserved and never has been.
134 minutes of movie and not ONE crackhead, thug or any other such ill that Hollyweird has a fetish to show us as.  Not even in the ONE place where we might have understood seeing one.

The concept of Wakanda NOT opening its secrets to the world at large due to very present awareness of what the colonizers (get used to this word) would do was not missed.
In the introduction of the story’s protagonists in Erik Killmonger and Ulysses Klaue as representations of American influence over the exacting of revenge in the former and the European influence over the raping of resources in the latter were draped all through the presentation.  At no point more than preachy enough in chiding Western nations for what was REALLY done to Africa with no remorse – while sparing a bit of that for those who allowed or were complicit in it happening in the first place – other than being ruthlessly selfish, Killmonger was a villain who you couldn’t FULLY hate once you realize WHY he was and not only what.

"Bury me in the ocean with my ancestors who jumped from ships 'cause they knew death was better than bondage." 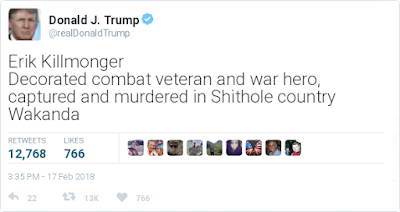 (purveyors of fuckshit will just never quite get it though)

People were in theaters in Kinte cloth and their finest semi-African garb, I myself had on a Black Panther shirt as did my woman.  Some people didn’t – or refused to – get it.  We all know that Wakanda is not an actual country, but the excitement of seeing African nations represented as something other than primitive bushes in third-world shitholes means something.  If that is what it takes to elicit some African pride in people and get them outside to spend a few dollars on a movie night then so be it.

I particularly liked that the king’s guard were a bad-fucking-ass group of women for this one.  That the main proprietor of the entire nation’s scientific advances was ONE woman, a very young one at that.  Not for any particular reason than – again, back to representation – for little girls to see themselves doing more than squeezing out babies and showing their titties.

We’re not here to argue over who knew/knows what about comic books or shit on the preferences of anyone who is new to the party and/or might not have cared about this particular character before 22 months ago when we saw Captain America: Civil War.

The last movie I paid money to see more than once was the first Transformers movie in summer 2007.  The ONLY thing that kept us from putting out the money to make this the next last night was the fact that it was sold out everywhere we needed to try and it was a school night.  Next weekend, it will have to be.
black panther black representation chadwick boseman comic books in the movies marvel movie review