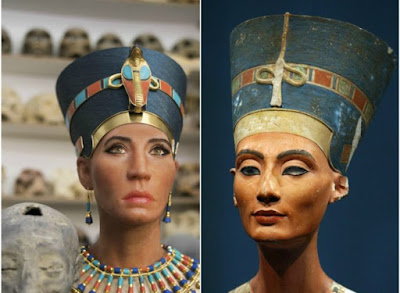 It’s kind of like they sit around and think to themselves “just what bullshit can we put forth and then claim plausible deniability of?” and then proceed to insult our intelligence.

We’ve seen this happen with the physical representation of Jesus, every single individual in the book of Exodus in every cinematic presentation ever, Cleopatra, Laurence Olivier as Othello…  I could go on but I think you get it.
Let me stop for a moment…
Egypt is here:

(and in case you went to public school, Africa is actually MUCH larger than that in real life)

Anyway…  In case you looked at the lightskinnded woman above and said “Harpo, who dis woman?” it is Today’s pseudo representation of what a reconstructed Nefertiti should have looked like.
What we know is that her daughter, Ankhesenpaaten would go on to be the queen of Tutankamun, one of the most recognizable kings of the 18th Dynasty from 1300something BC.  What we can surmise is that human migration was not yet 3400 years ago what is it now or even was 700 years ago.  That said, we can lean on the fact that the people entrusted to entomb the great king’s depiction of him might be pretty damn close to what most people in that region at the time looked like.  Their summation of his life included this statue: 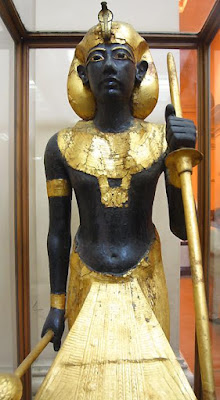 So…  If this man, only a generation removed from a VERY non-mobile era in world history, was darker than these Wallabees on my feet then just why in the blue hell am I to believe that someone BEFORE him was a lightskinnded?
They WANT us to hate our darker skinnded origins and praise fairer hued ones as superior.

Hollyweird has known this for years and steady gives us Tyler Perry movies to support it.  Now the mainstream media is getting on that train and cashing the hell in on us.  Black Panther opens next week and is a portrait of Black Excellence, we MUST get out and support!
We can’t let them do this.
afrika black people love chicken egypt hollyweird hotep hotep shit in the news mommy what's a hotep? nefertiti