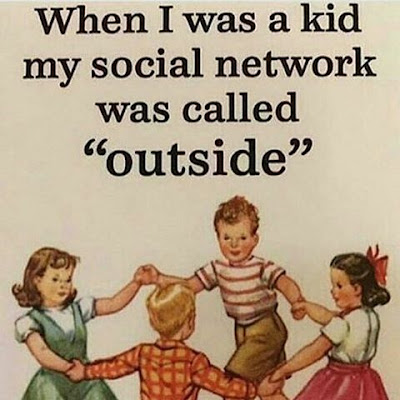 I used to think that the border lines on the map were actually PHYSICALLY out there in the world.  I was confused as fuck when we would travel and I DIDN’T see them.

In the summers while mom was at work, we would walk to another neighborhood in the city with a few friends from ours and meet them to play against them in football, or basketball, or baseball…  Or all THREE.  Sometimes we would do it as close to the nearest city park available, so as to score free lunch at the same time.

Also in the summers, when mom was home – and usually already gone off to bed – we’d have these EPIC games of hide and seek wherein the whole ass neighborhood was available as a running surface.  It was nothing for a single round to last an hour and see someone running all the way from Douglas Park to MLK, through people’s yard and jumping fences and shit.  We had this garage with storage space upstairs, we’d hide in the rafters and jump out the windows, on top of the neighbor’s garage and roofs and shit.

ALSO in the summers…  We would literally sit out on the front porch and stoop in front of our house until like 3am, for lack of anything better to do.  Always at least four, but sometimes 5-10 deep just shooting the shit.  When we’d see a car coming down Broad Avenue, EVERYONE would pretend to be jumping ONE person out of the group just to see how the driver would respond.  All of those years of doing this stupid shit; TWO people stopped.  One tried to break it up and almost got fucked up for it and one just stopped to watch.

We could easily walk to the store around the corner from the house as early as age 9 or 10 and not be snatched up.  The drug dealers, not willing to leave their spot, would stop us on the way with “aye, lil’ man!” and have us bring them back a Mt Dew and Doritos and hand us a $5 to pay for it and be like “’preciate it, keep the change” when we came back. Bear in mind, that 24oz Mountain Dew and bag of Doritos totaled like a dollar fiddy back in the day.  $3.50 was a gold mine to kids like us.

If I’m honest, there were MORE crackheads and butt dispensaries street walkers walking on MLK back in the early 90s than there is even now, but the ones out there seemed to have a different respect for the innocence of childhood.  They might beg for money, or offer a blowjay for $3, but only to adults.  These ones out here these days have evolved.  No way in hell I would subject my baby to that neighborhood with the chances I have on my plate now.

But I appreciate it all for what it made me.  The cats that were out there behaving stupidly with us are still with us, sometimes behaving stupidly.  The difference now is that we have shit to lose and know the limitations of our stupidities.  As much as I would love for Ava to play outside with the neighbors' kids and as much as she loves to play outside.  I hardly ever see them outside to be played with and DAMN sure ain't about to unleash her to play out there unsupervised.
all times of night biking don't try this shit in 2018 east greensboro growing old growing up when I was a kid youth