As ever, got dragged into a discussion on The BookFace that started about one thing and went WAAAAY off the wrong way from there.  Someone who had previously been exposed and roasted as a flaming racist in a conversation that was since deleted jumps into another to assume that he has been baited and continue his shit.
I guess he was inferring and not assuming, but oh well.
Anyway…

The second conversation goes off the deep end and somehow it turns from his passive-aggressive “I can’t be racist, I helped a black couple move a couch once” racism to his stance on abortion rights, which were flatly disgusting.
Now aware of the dicketry of his views, we tend to screen shot his shit before he has had a chance to delete.  Here is a sampling of the kind of shit he is capable of: 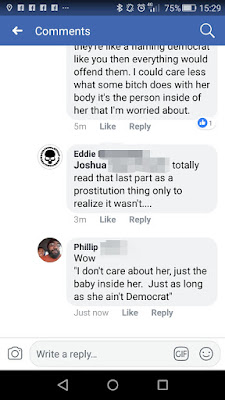 Needless to say, when someone is immolating in wrongness that they refuse to acknowledge but not being let off the hook by ANYONE, they tend to burn down in their own bullshit.  By the end of the conversation he SWEARS he didn’t report for deletion, I had proposed that I run for office in 2020 and take his wildly extreme anti-abortion stance to another level.  It took off so well among my supporters that I even Tweeted it since you can’t have a policy position without it being on Twitter, naturally. 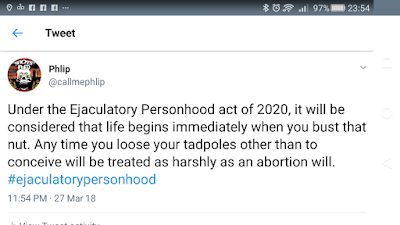 I also kicked around hashtags like #GooLivesMatter and #SaveTheSperms, but I think we are good with what we have thus far.

So now we explain it all…
Since no one seems to be willing to allow us to define “life” as the moment of conception, we should back it up a few strokes (see what I did there?) and define it as life beginning at ejaculation.  Simply put, if you blow your wad in ANY manner other than one that might bring a life into this world then you are in violation of the Ejaculatory Personhood Act of 2020 and have committed a crime.

-   Using a rubber will count as a hostage situation.
-   A blowjay given by a man or woman (no discrimination) will be tried as improper disposal of a dead body on one extreme and cannibalism on another.
-   Premature ejaculation would count as negligent homicide if it doesn’t reach its properly intended target.
-   Women aren’t off the hook and can be fined for every period they have and an egg is lost.
-   Sperm/egg donation is only allowed in licensed facilities and even then not for profit, lest they be labeled as “human trafficking” outfits.
-   Anyone above puberty age who engages in this will be tried as an adult.

We MUST do as we must to stop abortions, even if that means criminalizing the behaviors!  Naturally, we have over two years to hash out all of the details and particulars of the full proposal before presenting it as a bill to be voted on by the people, but we think we’re onto something here.

(now who gon' arrest the Hulk)