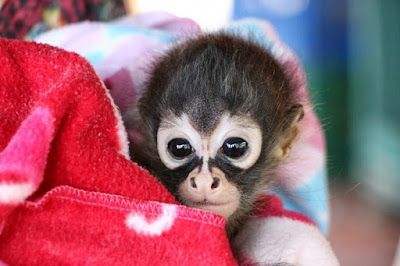 Ian was my littlest buddy of all time…
He was a 10-pound Grivet Monkey I convinced an exotics shop that shouldn’t have sold him to sell him to me.
…  and he tried like hell to ruin my life.

Funny thing about monkeys, even little ones.  They are territorial little shits, even the little ones!
I was basically not allowed to have company in my house when Ian’s cage was in a common area, or he would raise all grains of holy fucking hell until he was the center of attention.  Covering his cage didn’t help, and ignoring him with an exposed cage would serve it that he would ASSUREDLY fling shit in your direction.

I should have tried to train the little bastard to pitch for the Pirates, he had quite the arm!

Anyway…  As long as Ian was being played with and the center of attention, even outside of his cage, then he was all good.  One night I had a female supplicant to visit me.  Immediately upon walking in the house, she noticed Ian’s cage hanging in the corner of the living room and hit me with the “aaaaawwww, he’s so cute!” bit that usually worked so easily in the melting of panties when the prep of a damn good meal didn’t quite get it done.
Well, this particular night, our encounter escalated quickly and would never have made it off the couch if not for a loss of a foothold and a fall onto the floor, followed by a ‘fuggit’ and keeping things kinetic.  A few minutes into it all, Ian started doing his attention whore thing.  Me?  I am used to it, and when I am alone he generally got the hell over it and I could go on with my life.  But when a stranger dared be in my house and not be there to fawn over the “cute little monkey” and hand feed him snacks and/or otherwise play with him?  Nah dawg™, that shit ain’t about to fly.
Wait…  Shit WAS about to fly.  This little bastard would throw things out of his cage until someone addressed him.  When he ran out of “things,” he would create things to throw.
Needless to say, it took me six weeks to get this girl’s attention and the only way I could finagle her visiting me was to move Ian to his room, wherein he would STILL make a ton of noise if someone would dare be in the house and awake.

My homies used to come over.  We’d fire up the grill, drink beer and play video games from early Saturday afternoon until deep into the after dark hours when we didn’t have anything else set up to do.
Then I got Ian.  They thought it was funny to blow weed smoke in his cage to mellow him and it worked.  When I finally got the smell of smoke out my crib, I had to stop the smoking inside all the way out so this was no longer an option.  Well either Ian was mad at the lack of weed in his interactions with the homies (I didn’t EVER take him outside), he would take back to acting the fuck out and – you guessed it – throwing shit at the homies.  They thought it was funny at first when drunk or high, but it stands to reason that my friends aren’t ALWAYS around the house intending to be inebriated, and a ten-pound money throwing dooky at you is immensely less funny when you have to experience it through the lens of sobriety.
Needless to say, with the added specter and hazard of flying fecal matter, my crib became the FORMER hangout spot.

Here I was…
Can’t fuck in my own house.
Can’t have the homies over.
But aye, “I gotta monkey tho, n**ga!”
This was beginning to not be worth it.
Three months of a sexless hermit and TERRIBLY bored with single-player video games and having scoured all the ENTIRE internet for porn of interest to me, I had to do something.  Something drastic.  I decided that Ian’s time in my house was fun, but I should probably get a fucking dog or something more practical and less dangerous to the surroundings.  I loaded him and his cage in the car and covered it with a towel to take him back to the pet shop I had convinced to sell him to me.  Bitch at the counter looked at me all smug and shit, like “I TOLD you I shouldn’t sell him.”  Fuck that, just take this little asshole back so I can get some pussy in my own home!  She was having none of it.  I wasn’t ABOUT to try and drive him all the way back to my house and continue my hermit life.  It was beginning to wear on me and drinking alone ain’t exactly cool, I have learned.
I tried to negotiate for her to give me HALF my money back and just charge the rest to the game, bus she still just wasn't having it.  Fuck it all, just keep him and get him out of my life.  The depression of my only friend being a monkey is much sadder than the loss of a couple of hundred bucks.

I kinda miss that little motherfucker.  He was HILARIOUS.  I mean, I knew his penchant for throwing shit in a fit of temper tantrum and found it weirdly funny.
And I love to laugh…
…  just not as much as I love sex.