True Story©… At The Playground 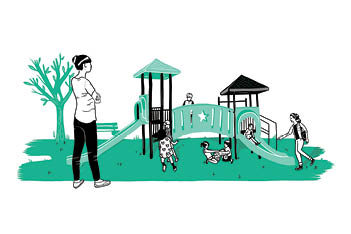 Can we please get back to politics?

So back before we got into election week month the weather was unseasonably warm and I had daylight after work to do things before I had to make sure home was ready for dinners and whatnot.  Y’know, get outside and stretch my legs and enjoy something other than these four walls all day every day.  The governor reopened parks and playgrounds and apparently some parents have had the same idea for their kids.  Smart, cheap and wears their little asses out for an effective bedtime catalyst.

Normally I would begin in one park and then pass through two other connected ones for a good 3-4 mile walk/run, but this particular Thursday, I really just wanted to sit on the bench and read.  I chose a park near my mother’s house, since I would be by there directly after work to take her trash cans to the street anyway.  In such, I parked my car in the cul de sac as I have for 20 years and walked to the park with my book.  There was a family sitting on the far bench while their kids played on the playground with another couple’s kids while that couple sat on the bench to the left.  That left me the picnic table directly next to the playground.  No biggie…  I have done worse on this picnic table than reading a book before.

Have I ever mentioned that I hate bad-ass kids or parents who are inattentive to their kids being fucking monsters?
Well the “far” parents were indifferent to their kids pushing and jumping in line, cursing out loud and randomly squealing as if they were being kidnapped or killed or some shit.  Needless to say, their antics were preventing me from focusing on my book.  I continued to try though.  One of the boys’ name was Jacob, I could tell from his sister continually whining his name for him to do shit he was quite apparently uninterested in doing.
Several minutes into this, a soccer ball was produced and was being tossed about the playground and into the larger fields surrounding it so it frequently passed me.  Jacob and his siblings continued their dicketry and their parents continued to be buried in their phones and not even looking.

…  then the ball began to roll over toward me.
The first time I kicked it back to the kids.  None said “thank you.”  Then a second, still no thank you.  The third time it rolled over near me, I only kicked it far enough for them to not have to get inside of social distancing space with me because it is still Rona outside and I don’t know these little fuckers.
Jacob, realizing that I wasn’t doing their ungrateful asses another solid, came to get the ball.  He picked it up and I stopped him.

[Phlip note: his parents DON’T know me, and still weren’t even fucking looking]

Me: “They wanted me to meet you all here today to give you some news they couldn’t tell you themselves.”

Why the shit did I take it there?  I was really not prepared for just how smart or dumb this kid is and would have to freestyle a True Story© if he knew some shit.
The look on his face let me know I had the upper hand.

Jacob: “But I have baby pictures in the house.”

Me: “Any in the hospital from the day you were born?”

Me: “I know, you’re the oldest and remember your brother and sister’s births.”

Good guess, Phillip, now close this shit before his parents see him talking to a stranger!

Me: “It’s okay little buddy.  They’re the only parents you know and they’d have it no other way.”

I picked up my book from the table and walked briskly toward my mom’s house out of the park.  I could hear Jacob crying loudly as he went toward his parents.  Once I was across the street, into the circle and out of eyeshot, my brisk walk became a sprint so they couldn’t see which house I went into.  From my mom’s living room window, I could see them walk to the street, trying to see which of the four houses in the cul de sac I may have gone into but they were not so brave as to go knocking on doors.

Here’s the thing…  Kids will be kids and there is nothing necessarily wrong with that.  However, if in the course of “kids being kids,” they’re allowed to cavort in uncheck shenanigous dicketry then you have a delinquent in the making, and that will become an ongoing problem for the rest of the world to have to contend with for the rest of their lives.
Now was my telling this kid he was adopted helpful?  Hell no!  Will it likely come up in therapy sessions for both him AND his parents in the coming years?  Probably.  The most important part, though, was seeing to it that a bad-ass kid (and with him, his parents) received some getback for his bad-ass-kid behavior and their blind eye to said bad-ass behavior.

So once I saw that they’d retreated back into the park, I ducked into my car and drove the fuck up out of there quickfast and got home.
I was only really upset with myself that I didn’t have a plan at ready to talk my way out of this shit if the kid had seen pictures of his parents with him in the hospital when he was born.  I will keep that in mind for next time.
Also, I don’t sit and read in that park anymore.