February 23, 2017
Warning: you will not receive a humorous story this week.  This day means something bigger to me than the previous 25 Thursdays (and one bonus Tuesday) have.  I'll be back next week. 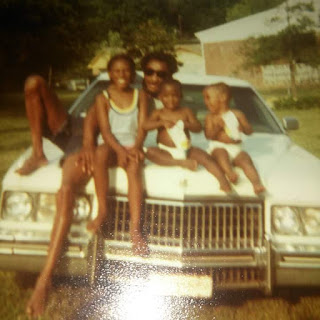 Starting in 2006, every year on or around February 23rd I do my best to visit the cemetery.

I clear the grass and dust off his headstone (he would put a foot in my ass for buying flowers just to leave them), I sit down Indian-style next to it and I talk.  I don’t expect a response, but I talk.  I talk about life, about how things are going and what irons I might happen to have in whatever fire at a given time.  And I cry...  It seems that in the time between my visits, something more of the lessons he idly told us coming up has revealed itself as truth.  So I thank him.

We lost my granddad on July 9th, 2004…  It was a Friday, which is a WILDLY horrible time to have to prepare for a funeral for the man who gave you the lessons he expected you to need as an adult.  I remember the whole WEEK like it was not almost 13 years ago now.  My brother's car had caught fire two days prior and the only thing that survived the fire was his bible.  That Friday I was on my way to work some overtime when my phone rang ignored, then rang twice more; “Phillip, you need to come to the hospital, they’ve taken Pop back again.”
No big deal, I thought.  He would go in, have a couple tests done and we’d be shooting the shit about the Lakers again within the week.  That thought went south about as soon as I got in the room, they were calling everyone in to say goodbye and the Atlanta crew had all been made aware and pulled from work obligations to get on the road.  My aunts on my dad’s side of the family showed up too.  Given my parents' situation, that was big of them to be around the whole weekend and cook for us.

I called out of work that day, something I am loath to do -- oddly that is a habit that I learned directly from him.

Saturday, I really wanted to wake up and it all be an incredibly bad dream.  Nope, my cousins were still back in from Atlanta only a week after having been in for the cookout.  I had an overtime shift scheduled and needed to get away, so I went in and did that 4 hours since I knew I would be the only one on the first floor for that period of time.
Back at Granny’s house, we (my siblings/cousins and I) sat on the porch.  Nobody spoke.  Not for anger or any animosity toward each other, we are all as close as siblings to this day, we just couldn’t.  The silence was somewhat broken by the arrival of a purple butterfly and a red bird, both of which came close and wouldn’t be shooed off.
[Phlip note: that explains the butterfly tattoos in my family, so don’t question this when I get mine this spring/summer]
That night, we did some of his favorite things...  We played Tunk for quarters, drank Scotch and Cold Duck and we talked junk over the game until like 2 or 3 in the morning.

He was quiet.  Didn’t say a lot, but always listening.  When he spoke, you had better damn well listen.  Not because he had a temper (not with the kids, at least), but because you’d miss some GOOD shit running your mouth.  You knew when he was nonplussed by how he started his statements.  Simply, if he led with “son…” and continued from there then you were all good but if it started with “boy…” then you might want to pay extra special attention.
Any time you'd come by the house, he would be in his den at his desk fiddling with an adding machine or watching an old Western with his eyes closed.  Rarely seen without his Lakers hat.

This is easily one of the roughest weeks of my every year, especially with Ava around now.  He lived to spoil the girls in the family and would love her as a little charmer.
I know he is still with me, his voice is literally the only one other than my own that I hear when I think.  He is the voice of my conscience, up to and including how he begins his statements.

I can’t hold y’all here much longer, I just needed to use this space this week to think a little bit.  Happy birthday, old man…  We miss you!