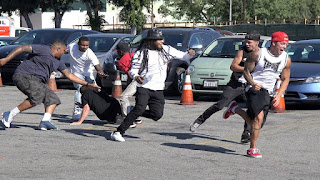 Look, I know it isn’t an actual word.

In The Wire season three/episode 12, after two and two-thirds seasons of Herc and Carver picking him up and whooping his ass in the course of questionable arrests that never stuck, we find Preston “Bodie” Broadus in the clutches of Jimmy McNulty and Rhonda Pearlman after am arrest for selling drugs while in the protected area, dubbed "Hamsterdam."
Those of you who know the show know that Hamsterdam was supposedly a free zone where no one was to be arrested for peddling their wares, as promised by law enforcement.  Based on that knowledge, to then turn and arrest someone for a situation you specifically set them up in is entrapment, but Bodie was a middle school dropout and that word became “contrapment” instead.

Not bad thinking in the moment from the boy.

After my recent binge rewatch of The Wire, I noticed things I had not seen/remembered in my initial viewings, and one thing was how damn near everyone whose name we knew involved in that little Hamsterdam experiment wound up either in custody or dead.  Sometimes both, and usually in that very order.

More importantly (and not really having much to do with the above), I considered how I could use these items to my own in-person advantage and entertainment.  If you know nothing about me, I despise rapists and racists (only fitting those words rhyme, no?) and will stop at nothing to expose either in the most embarrassing manner possible.  Only gonna deal with one of those today.

As one might know, there is a seedy underbelly for basically anything one can imagine in FB groups, see my discussion of such over on TonyGrands.com.
So one day I am cruising the book and someone linked a meme about victims of sexual assault and some jackass basically took it upon himself to assert that victims in general were not so much worth the effort for bringing the shit on themselves.  I checked the profile and he was local, but not connected to anyone I know (odd given how small this, the third largest city in my state is).  I asked to join a group he was in and it was a total Bro-Fest, just more of the same shit he was previously espousing.  Anyway, I mostly lurked and made nice with the folks playing the "one of us" game and he friend requests me.  Naturally as soon as I accept, he is in my inbox about parties and where I hang out and such, basically touting the parties that he attends and the loose women who make bad decisions and yaddayaddayadda.

I hashed out a quick plan though.  I would get a few of my homies and a few girls together for a hotel party at an extended stay.  Couches, extra bedrooms, no need to clean the shit up ourselves when we were done...  Had one of the girls set it up with her ID for the sake of what might happen later.  Add some cheap liquor, maybe some weed and make sure SOMEONE in the building vapes, right?  Yeah, this douche missile would not THINK of missing the opportunity to take advantage of one of the women in my party.
Except for the fact that it was a total sham…
Once the party was on, we get him liquored up.  Me and the my friends only drank to our known tolerances and the one girl tasked with flirting with him was FAKING being drunk.  He would pour her a drink and we’d swap it out as soon as his head was turned, but she would play the role of the lightweight drinker, appearing to become more pliable in his clutches.  Naturally, he thinks he has enough liquor in her to make his move and me and mine have ONLY had enough to be aggressive in response to a situation.  Quite apparently, she is cognizant enough to not be taken advantage of and me and the homies aren't letting that happen to anyone on our watch.  After a while, we're being loud and shit so she agrees to go to the room with him “just to talk in a more quiet setting” and he thinks this is his moment.

Once in the room alone with her, he talks about enough to get close.  He gets close enough to try to kiss, which she does not bat away until he gets more aggressive.  Once he does, getting all handsy and trying to go down her pants, she asks him to stop once.  No worries, we're all listening since everyone in the "party" is aware.  He responds that she was JUST with it a couple minutes before (which she totally wasn’t) and continues and she gets louder in her yelling of “stop, no!” and that would naturally be the queue for my friends and I to bust in the room and beat the entire shit out of him.And BOY did we ever, dragged him out of the room, beat him in the living room and dragged him out back to stomp on him some more.  Unconscious now, we left him in the bed of his truck and gathered our shit from the room and went on about our lives.  We all blocked him on FB and from our phones.  Naturally, no way an attempted rapist will report an assault borne from his attempted rape to the police.

I guess this was more of a simple setup than “contrapment,” but I could give a fuck so long as a pussy crook learned his lesson the hard way.  Hell, it was more than worth the money the room and party favors cost too!
fighting street justice true story