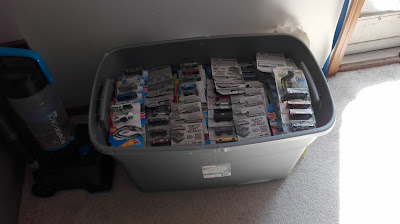 I collect things that are of interest to me.  One of the things I collect most intently and intensely is Hot Wheels cars.  I pass by two Wal Mart super centers and one Neighborhood Market on my EVERY day trek.  That will change soon (more on that Sunday).  But I used to – say about from the early 00s-09ish – be hardcore about finding and possessing hot wheels that were of interest to me.  It was something fun to do, going from store to store to store, seeing what they had and picking up the ones I liked and bringing them home just to have them.

Someone who was living with me at the time basically told me that all of my hobbies were stupid and I lost interest.
But then it became obvious that I was what was stupid, not necessarily my hobbies, so she left me with a lesson to continue to be me and enjoy all of what makes me me.  Around 2014/15ish, I was back in the stores all over, thumbing through the racks and pegs and bins of Hot Wheels cars.  I found all – well, most of – my old ones from the various hiding places in the house.
[Phlip note: yes, Mimi, I am SURE there are more in here somewhere]

Sometimes I wake up on the weekend tell the lady I am “going hunting” and she knows that means I am about to stop at several Wal Marts, a couple of Targets and at least five Dollar Generals and assuming my squatted position in front of the pegs and picking out what I might want.  Once asked by a friend what she thought of the habit, she responded “he loves them, it is harmless and they’re only a dollar.  It could CERTAINLY be worse!”

The big bin above is a result of my “get them in one place” initiative of a few weeks ago.  She came home from work while I was filling the bin.  Looked at me and asked how many I thought it was.  I counted off the layer that was on top at the moment, surmised that there were three similar layers below it, plus a base layer facing another direction and guessed “somewhere between 5-700?”
She shook her head and walked off, then returning to the phone call she was on coming in the house about the 240-pound manchild she comes home to.
It was funny, but she gets me.

We travel a lot.  Winter Park Florida, Charleston SC, Williamsburg VA, various locales throughout the great state of NC.  We always pass a Wal Mart and can always use SOMETHING there while we’re out and about.  What I have noticed about these travels is that these other places get different cars than the ones we might get at home.  That said, she knows that we will usually wind up walking two different directions in the store and meeting back at a middle ground somewhere.

Passively, I am allowed to do something that everyone knows I enjoy.  She may be driven crazy by the fact that the house contains a flatly ridiculous number of model cars, but at no point has she decided to straight tell me that something I love to do is “stupid,” and that is why she can stay.