True Story©... Back To Life 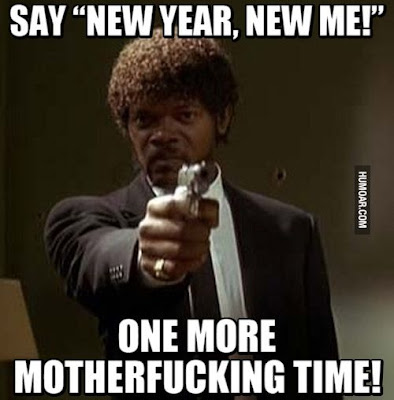 I tried some major cash grabs in 2017.  Right from the damn beginning, no less.  Y’all remember back in January, I decided I would be accountabilibuddy to people who needed to be insulted into action?
[link]

Well naturally, no one took me up on it.  No skin off my back.  I ended 2017 weighing considerably less and feeling a ton better than I did when I started it.
As discussed in these pages, a lot of eating right and a little bit of exercise has been the key.  Such an effective approach has it been that we were allowed to take long breaks from it all in the mid-summer and again for the holidays without doing too much damage.  Changing habits for the better tends to make shit better for when it’s time to snap back to your norms.


“Norms,” as it relates to me, includes showing my ass back up at the gym in the afternoons.  No huge deal, there, my physical conditioning has continued to remain good through walking on my lunches and spending as much time on my feet as possible otherwise.  What I DON’T wish on anyone is to have to deal with the “new year, new me” resolutioners who will jam up the parking lot and everything else about the gym until they lose interest sometime later this month.

New Year’s Day…  Fuggit, I woke up with a hangover and it was a million degrees below zero in North Carolina, plus my gym was closed that day.
Back to work on Tuesday, I planned to spend at least an hour with the gym as soon after getting off as possible.  Music player, Bluetooth headphones and phone all charged, I threw on my brand-ass new running shoes and struck out to my most localest YMCA.
…  and it was a fucking madhouse.  People I had never seen walking on the walking track, people I had not seen in MONTHS on the cardio equipment.  Old cats trying to keep up with their teenage sons on the weights, spin class, step class, basketball practice, EVERY brand of “new year, new me” imaginable.

Me?  I stretched like a responsible athlete, warmed up with a half-mile of walking and JUST as I was about to head and do some real cardio, I get a tap on the shoulder.
It was a young lady from back in high school.

Her: “Hey Phlip, what’s up?”
Me: “What’s good [redacted]?  Not a lot, just getting in here, getting started up.”
Her: “Looking good, I see your posts on Facebook.”
Me: “Thank you kindly”
Her: “I’m in here now, signed up in November, but decided I would start coming in January.  New year, new me.”

[Phlip note: paying for an expensive-ass Y membership for 2 months, but not bothering to use it?  What. The. FUCK.]

Me: “No doubt, everybody in here is doing more than the cats at home not doing shit.”
Her: “Right, right.”
Me: “Well lemme get back to moving while I’m warmed up.”
Her: “Well actually, I wanted to work with you, I see it has been working in your pics on FaceBook.”
Me: “C’mon, we got this”

Look…  I ain’t in the best of shape.  I ain’t even in the best shape I have been in my 30s (yet).  I am, however, one of the most physically capable fat dudes that anyone will soon or ever come across.  That being said, I got on the elliptical, set the timer to 15 minutes and proceeded to not slow down the entire time.  Headphones on, so if she was talking to me, I didn’t hear it over the sounds of Skyzoo on my giant headphones.
Time up, 3 minute cool down to let the heart rate settle and WIPE THE DAMNED MACHINE OFF.  Now it is time to pick up heavy things.


Me: “Look, my girlfriend and my sister are literally watching me talk to you right now.  I ain’t taking no new numbers.”

They weren’t looking at us, but I saw them both 100 feet away in the class and wasn’t taking no fucking chances.

Anyway…  I bid my old classmate adieu and finished all my lifting and ab work, then walked one more mile to end it all, my workout finished just after my lady’s class did.  Went home and inboxed the girl my daily workout plan, cooked and ate dinner, then eventually crashed out.
I saw the “read” check next to it yesterday morning.

So I finally got it figured out.  The “new year, new me” crowd are easily defeated when forced to deal with the wretched smell of their own bullshit.
The people who are there to put in the work to be the best version of their “me” that they can be will be ready to put in that work.  So drag em through it!  If they’re back for more the next time then you got a workout buddy.  If they turn tail and run, then you’ll have helped everyone clear up a space on the cardio equipment.
coaching exercise health and fitness motivation new year new you new year's resolutions true story