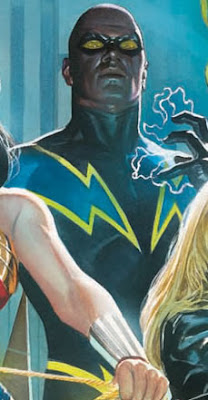 I’ll be honest…  Until last Monday, I had never even HEARD of Black Lightning.
As a part-time comic book nerd who has found himself in a dearth of time for it for most of my adult life – who, by the way, was never much for DC Comics anyway – it was just completely under my radar.

Episode 1 was about to come when my lady mentioned it to me.  “Hell, I’ll watch,” I said after a perfunctory Google search of the premise of the show.

On the whole, I was impressed with the show.  The presentation of Black life in America, a man willing to do what he must for his own kids and in the protection of those in his responsibility and a well-written story were all wins.  This is The CW we’re talking about here, so I was fully expecting low-value production bordering campy or even comical.
In the latter, they did not disappoint.  This would be made ESPECIALLY obvious when our hero finally donned his costume.  Cheesy superhero quotes ensued, even through attempts by the writers to make a self-reverent joke of the practice.

Never mind that, though.  The story is relatable in 2018, we have Strong Arm Steady’s Krondon playing Tobias Whale running the ill-gotten-gains side of things with a certain level of colorstruckness in the most lightskinnded of lightskinnded as an albino basically crapping on the behaviors and value of his darker employees.  We have the police behaving like the damned police in their handling of street-level things, wherein often the innocent are treated as the hardened criminals and the things they should likely spend more attention on as merely “black shit.”
Like how Lala could murder a woman in the middle of the street with a phone recording the whole thing, the camera ostensibly being left at the scene of the crime and them STILL not going right after him?  Like the fact that Tobias basically walked into his holding cell with permission and a police escort to choke him out?

And the MUSIC!  Closing the first episode with Gil Scott-Heron’s A Sign of the Ages and then episode 2 with Al Green’s Simply Beautiful?
Isaac Hayes’ Walk on By made a brief appearance in E1, as did Nina Simone’s Strange Fruit.  E2 gave us a taste of Billy Paul’s Am I Black Enough for You.  The topically brown people music in a brown people show is commendable.

No, Black Lightning is not reinventing the wheel, not in the least.  For a CW show – generally known for borderline corny presentations – it does a good job of being entertaining, DAMN good if you ask me and most of the internet.


What it is doing for me is providing a welcome stop-gap between Luke Cage at the end of 2016 and Black Panther in three weeks.  We’re seeing representations of ourselves worth showing our babies for a change.
black hollywood black lightning comic books hotep hotep shit superheroes television