Hollywood hates us.  Seriously, Hollywood is a passively-declared, but aggressively-behaved enemy of the Ankh-Right.  Scroll through your social media timelines; the hot item of the moment is Game of Thrones.  If you haven’t noticed yet, GoT suffers from a debilitating lack of color.  Apologists want to say that it is due to the fact that the basis for Westeros is Medieval Europe, but we will storm right through that logic red light and blame it on MORE racism in Hollywood.

We get Salladhor Saan as a pirate and sellsail, both SUPREMELY enviable professions in a fantasy tale of kings and queens, right?  He gets himself into three episodes over three seasons and is eventually reduced to a joke and sent the fuck on his way in exchange for some gold and leaves his pride behind.
Hell, at least they let him live. 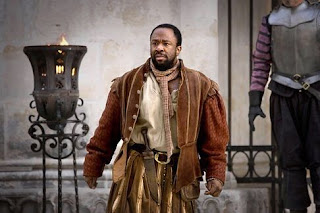 Xaro Hhoan Daxos gets himself into five episodes in season two.  An exiled self-proclaimed King, he epitomizes the Cocky Negro™ that Hollywood lives to remind us of.  He is hell bent on reminding Daenerys that he is CRAZY rich and that in exchange for her hand in marriage and some good ol’-fashioned miscegenation babies, he would share some of his riches with her and fund her campaign to receive her birthright.  After his workers try to steal the dragons, she realizes he is actually damn near dead-ass broke, so they lock him in a vault to die before raiding all of his shit and leave.
Cocky, hot for him a good white woman and actually broke.  Yep, that is how they want us. 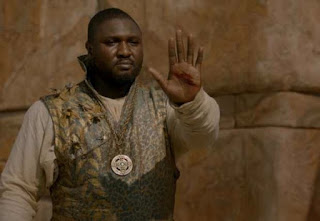 Areo Hotah is a personal bodyguard of the prince of House Martell.  Thus far, the most noble title of any of the brown people in all of Westeros and Essos.  He doesn’t speak a lot, but is allowed to speak, he actually is allowed to live for the 6 episodes he appears in until he is eventually stabbed in the back, presumably as punishment for DARING being a brown man in Westeros with a respectable job.  To make it that much more shitty, he was the only one working guard at that moment who was killed.  Sounds like the beginning of a horror movie, doesn’t it? 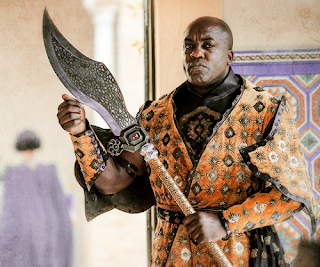 The Unsullied…
Here we go.  A whole ARMY of disciplined brown men, ready to fight and FUCK things up.  Wait, you mean to tell me that they’re all, 100% of them castrated warrior slaves?
NEXT!
Wait, let’s not get away from The Unsullied yet.  Grey Worm is the lead of the group and gets to spend major time with Daenerys in her conquests.  Wait, he is still a eununch though. 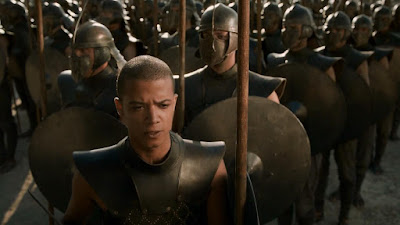 That leaves us with Missandei of Naath.  Dear sweet gracious creator, that fine-ass Missandei of Naath.  I swear, if she were not a fictional character, I would want to make her one of my three wives.  Hell, maybe even my fourth or fifth.
But even with her, she was a slave and is basically left as the queen’s pet-slash-translator apparently fluent in 19 languages.  A common laborer and while that in itself was a step up from humble beginnings and a better outcome than her brothers enjoyed in The Unsullied, damn can we get some brown representation in the upper crust of Westeros?  Shit, she speaks EVERYONE'S languages!  Hell, even the one time we get to see her gloriously beautiful form unclothed, it is in a sex scene with someone who DOESN’T EVEN HAVE A DICK!  See, what that tells us is that the creators of this show didn’t even want to create a logical chance of there being any brown babies into Westeros. 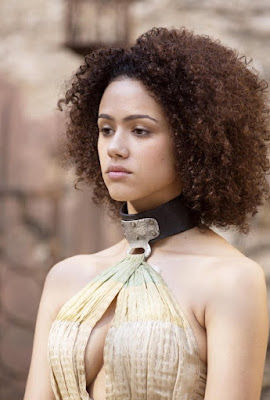 Which brings us back to my greater point.
Game of Thrones is a microcosm of the larger world.  For the same reason we cannot be allowed to see Black Kings and Queens in depictions of African royalty – which we already KNEW were brown like us – so too can we NOT be allowed to see them even having a chance at such in any other locale whether they are real or fictional.
This has NEVER been by accident.  If we were allowed to see ourselves as the kings and queens we are and not as slaves, servants and crackheads, what would we do with ourselves?  There is a NEED in Hollyweird to keep us down and that is not due to change any time soon.
black hollywood black power game of thrones hotep shit hoteps mommy what's a hotep? television