Hotep Movie Moment -- Lean On Me 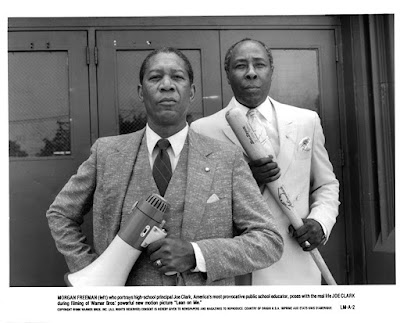 Y’all know one of the Hotep-est movies ever made was based on a real-life event, right?

In the 1989 classic film Lean On Me, Joe Clark (above right), portrayed by the voice of everyone’s conscience Morgan Freeman (left) is tasked with the tall order of being the cleaner of beleaguered East Side High in Paterson NJ.

Hollyweird norms would serve it that he would fail MISERABLY in this task and eventually need to be saved by someone whose skin is much paler than his own, but be-damned-lieve it or not, he succeeded!
He went up in that school and he yelled at people, he bullied the crackheads, he threatened the dealers and risked his own freedom to keep those kids safe and get those damn test scores up!
Hoo-fuckin’-ray Hollyweird!  One time in the then-76 years of motion pictures featuring sound, they let a Black man come into a shit situation and make it a NOT shit situation without first involving a White Savior™.
AND this shit was based on a real true story?
Something HAS to be awry, right?
RIGHT?
Maaaaaan…  The whole damn thing was made up.  If we were to have been told that a high school was saved from being taken over by the state (what in the fuck even IS that?) and it was a Black man who stepped in and saved this from taking place, then that man would get one of the 20 days of school we spend every February, don’t you think?

Yes, there was a Joe Louis Clark who was the principal of East Side High and yes he was a tough disciplinarian with a bullhorn and ball bat.  Yes, he attempted to put some life into these kids by kicking like 300 of them out and yes the numbers did move slightly up – a fact WAY overplayed in the movie.

His jettisoning of the bad apples from the school also soured and shied away some of the good ones too.  Furthermore, he only created new street level problems by putting the problem children out of the one environment where they MIGHT be rehabilitated to thrive.

Fuck, the movie even goes as far as to SUGGEST that the state was threatening to take over the school when that was not even actually the case in real life.

…  and this is why Hollywood hates us.

One year after the real Joe Clark resigned and went to do his shtick where it might be better received, in the prison system, the state decided to take cues from the movie.  Instead of letting Warner Brothers Entertainment slander them with a big angry strong Black man, they took over the fucking school anyway.

Hollyweird is undefeated in its distaste for Black America.  It really really is.  Sure, they gave us 124 minutes of a Black man doing wonderful things and turning other brown peoples' situations positive, but this was not without the real-life consequences of the exact opposite happening to the very people portrayed in that same film.

Not to let anyone in on more than they need to know about me, but in my adult-adult life, I have worked full time for three companies.   I will not name any of the three, but you’ve assuredly heard of all of them.   I will cross fourteen years with my current employer next week.   More importantly – to me at least – each of my prior two company changes was of my own volition and I was not removed from the premises by any security folks for cause or anything such.      One benefit of being consistent with a place of employment is the accrual of leave time.   With my first real full-time (as in with a company that I didn’t work for when I was 18 and actually offered benefits) employer there was no expiration of leave time and I was so busy with school that I never had time to be far enough away to warrant taking time off for any real reason. A couple of years in, I found myself staring at WEEKS of accumulated off time and no real reason to use it.   Add to that the fact that I
Read more
May 12, 2017
1,349 Days
Read more