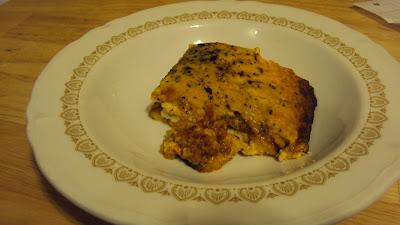 This is about to be pretty simple…  That is a good thing because Mimi turned me loose on the kitchen by myself this week.

While we prepared for the Fancy Vinegar Chicken, I had an epiphany.  When Mimi sliced up the zucchini on the mandoline, my brain yelled “LASAGNA!” and since my mouth is often captive to my brain’s random utterances, I found myself answering Mimi soon after it happened.

So…
What will be so easy about this?
Why, the fact that we are using items/techniques that we have already employed!

As mentioned and linked above, the “noodles” for the lasagna will be zucchinis as thinly sliced as your mandoline can produce.  The sauce will be the same as we used in the spaghetti, and then again in the pizza post.

To save you the time of going back to either of those, I will start with the toolkit for the sauce here: 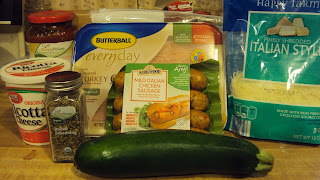 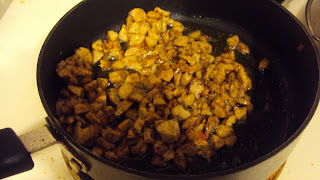 Saute the diced sausages until they're the right texture, then set aside. 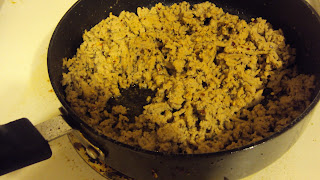 Brown the ground meat until done. 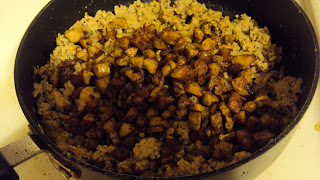 Mix the sausages back in, then... 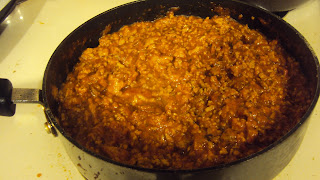 While (well, probably before) that prepares, get out your mandoline and slice up four zucchini the long way after cutting the tops and bottoms off of them: 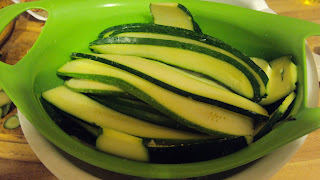 Now it is a game of simple assembly in your pan.
Lightly oil (or spray) the bottom of the pan, then put a thin layer of plain (no meat) sauce on it and then lay one contiguous (no gaps, overlap a little if you need to) layer of zucchini slices down, pour and spread a thin layer of sauce on next. 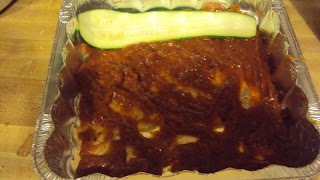 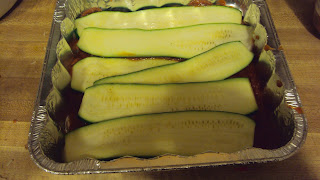 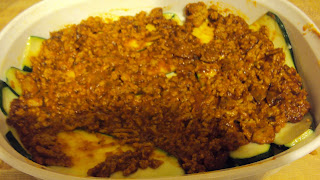 Now top with--…  wait!
Have I ever told y’all how much I hate ricotta and cottage cheese?  Mimi knew this so she hit me with the idea to mix the ricotta with the shredded cheese and two eggs for that layer. 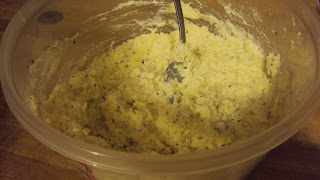 There, now that we got that out of the way…  Layer again the same way and continue to do so until you’ve run out of zucchini, but try to aim for the classic 3 layers of “noodles” approach. 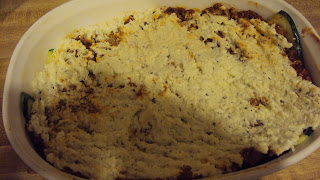 Sprinkle some more cheese on the top of the whole thing, plus some seasonings (basil, oregano, etc…) and then into the waiting 350° oven. 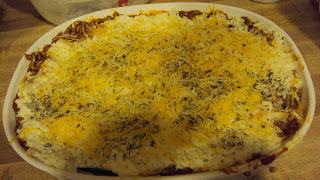 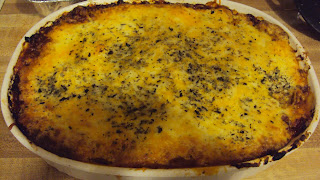 Now you can get your amazing woman back involved because she plates things better than you do. 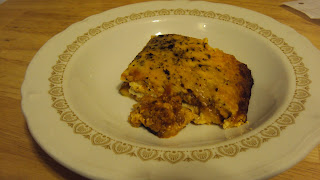 As with the above-mentioned/linked pizza night post, another AMAZING filling to this would be Mimi’s Lottery-Winning Chicken recipe.  All other things remain the same as far as noodles and preparation.  As I think of it, this might be an amazing base for any number of casseroles and presentations as well.  A good curry, a lemon pepper seafood blend, perhaps a BUFFALO chicken or steak and cheese blend of sorts.  The possibilities for this very simple-to-make dish are endless. 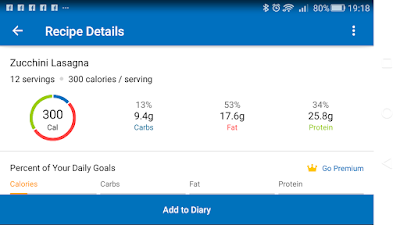 To be honest, her play to mix regular cheese with the ricotta cheese may have been the magic that made this dish.  I know there was a switch in the pans in the middle of the post, I actually came up with WAY more than I expected to.
I may have just daydreamed myself into something amazing here.
black people love chicken cooking food healthy eating in the kitchen no pasta phood phun with phlip spaghetti