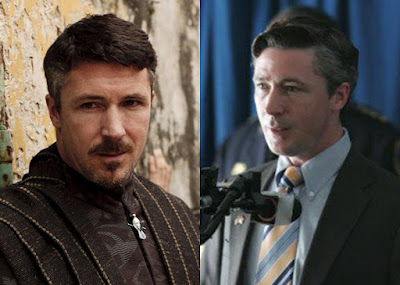 In 2002, The Wire debuted on HBO.
It is, in my opinion, one of the best three television shows of the last twenty years.  Will discuss one of the other two in a minute.

Each season of The Wire introduced a new layer of involvement in the inner workings of the Baltimore crime infrastructure that the show detailed the workings of.  Once introduced, each element remained a part of the story for the remainder of the series (except for the sometimes boring season two stuff).
The focus of 2004’s third season of the show was local politicians, including what would become Tommy Carcetti’s bold and unlikely run as a white mayor of a Chocolate City.  Carcetti was introduced in 09/19/20041’s episode “Time After Time” and would appear in 35 total episodes until the very end of the series.
An ambitious city councilman who would announce to a sitting mayor that he intended to unseat him before going out and doing JUST that.  A white man in a black city?  You have GOT to admire the amount of gumption that would allow a man to think he could pull that off, let alone actually go out and fucking do it.  Like literally any politician, he is reduced to employment of some snake-in-the-grass tactics to get to where he needed (well, wanted) to be…

-   Betray the trust of a previously-trusted “friend”?
You bet!
-   Playing “Hamsterdam” to his own political gain, everyone else bedamned?
Yep!
-   Using an “in” with the media to further his agenda without having to speak it from his own mouth?
Sure!
-   Playing all sides of a situation against the middle (remember when Valchek GAVE him information to win the debate)?
Bastard!

All this shit and dude has only JUST won the Mayor of Baltimore!  While training for the driver’s seat – not even IN it yet – he shits on MORE people who helped to position him for it.  He fucks off the money and uses THAT situation to turn his sights on the Governor’s seat next…
And he GETS that shit too!!!
As councilman-turned-Mayor-turned-Governor, there was not much of shit Carcetti wouldn’t do to keep his own ass out of the grease.  Initially, he was a likeable fresh face compared to the cogs in the machine he was sent to replace.  Unfortunately, he BECAME one of those cogs.

The series was allowed to end before we know what came of his next moves, but I have a hard time believing that he stopped simply at Governor.

His machinations and scheming people also in need political self-preservations, though?  Reminds me of someone else.

Introduced on the third episode of the very first season of Game of Thrones in 2011 (and, naturally, earlier than that in the novels the series is based upon).  He is immediately established as someone we probably shouldn’t trust, as the “Master of the Coin,” but also a dude who runs a whorehouse and admits to still lusting after Ned Stark’s wife.
Over the course of six seasons we would learn that Littlefinger was NEVER to be trusted, most especially by those dumb enough to actually do it…

-   Ned Stark…
Double-crossed and beheaded
-   That one hooker named Ros?
Killed by Joffrey for sport for not doing Littlefinger's bidding
-   Sansa Stark…
Captive to Joffrey, then to Ramsay Bolton
-   Roose Bolton?
See the just-above clusterfuck.
-   Lysa Arryn…
Disappeared through that giant weird hole in the floor
-   Cersei Lannister?
Threw her in the shit (“SHAME!!! SHAME!!! SHAME!!!”) instead of being exposed in his plot to kill her son.

Eventually, his shit catches up with him after Sansa has been basically sold off to enemies, abused and raped and damn near killed for her troubles.  Baelish thinks she trusts his words and she is all too willing to let him as her remaining family begins to come together.
With Jon away trying to save the world, Baelish makes his move to try to tear the north to shit for him to move in like ISIS and make it his own by separating the de facto head of household in Sansa and the coldest assassin in Westeros in Arya.
Luckily, one of those family members is Hal 9000 Bran, who as the three-eyed Raven knows everything.

His plots and fuckery are eventually exposed and he becomes a victim of his own dagger at the hands of Arya Stark while shitting his pants and begging to be allowed to live.

So…
What the fuck do EITHER of these things have to do with one another?
Thanks for asking.
See…
Game of Thrones was apparently set thousands and thousands of years ago.  I have done some extensive research and learned that Westeros is at least partially based on Ireland, which is where Aidan Gillan, the actor who plays – well, played – both Carcetti and Baelish is from.  One could surmise that the lessons of the ancestors and taking them beyond where they landed the first-run would be more than enough of a driver to lead the future.  Littlefinger's lust for the Iron Throne at the expense of anyone who might be in his way to it let to his eventual and very glorious demise.
Yes, I hear what you’re saying.  “But The Wire was here, done and gone before Game of Thrones even came on TV!” and to that I would remind you that one is based on a series of novels that debuted in 1996 and the other on a TV miniseries that did in 2000.
That said, in my head Carcetti is a distant relative of Littlefinger and the lessons of conniving his way into getting his motherfucking throat cut was enough of an imprint on the DNA of his progeny to learn the way to not getting your motherfucking throat cut if given another chance.  Through reincarnation, or perhaps bloodline preservation, Carcetti is proof that it could work.

Either that or someone needs to get at HBO for that time machine they apparently have around there.
game of thrones petyr baelish the wire tommy carcetti