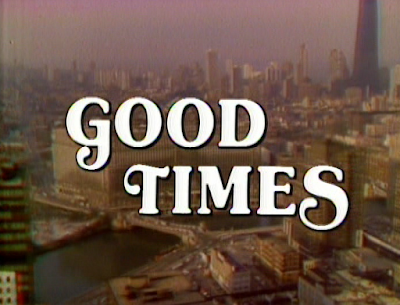 “Good Times”
What ‘good time’ there to be had when you literally can NOT escape the projects under any circumstances?

Is that becoming a constant around here?  It should be, since it seems to always a proven point.

In one of a few instances where a Black family is shown with both parents present as a constant, they seemed to find themselves mired in far-fetched bullshit to show off that they couldn’t catch a break.  Of 133 episodes of Good Times through the years, the Evans family (no relation) – as an ongoing plot focus – made several attempts to get OUT of what is implied to be Cabrini-Green.
I won’t even bother with why they were even IN Chicago when the show was spun off of Maude, which was set in NY.
Anyway…

A black family making due with no substance abuse, extramarital children, no babies having babies an artistic older son, a daughter on her way to school and a young son who is interested in the issues.  Shit, this was a hoteppian euphoria in the making even in 1974.  Right?
RIGHT?!!?

That old son?  Prone to shucking and jiving.
The daughter?  Sucker for love ass.
Young son?  Nah…  he aight.

The major problem, though?  The pride of their mother.  I recently sat down with a list of episodes and read the synapsis of each of the 133…  Of the 133 episodes, there were 100 opportunities for the family to get OUT of them projects and 107 instances where those opportunities were foiled by Florida Evans herself.

Season 1…
Episode 1: James thinks he will get a job.  Florida convinces the kids to ball out on a party to celebrate.  Spending money they didn’t have yet.
Episode 2: Florida refuses to believe that the painting of Ned The Wino Black Jesus has anything to do with the good luck the family experiences and it goes to shit.
Episode 4: James is offered a position paying $100 a day, but Florida overrides because she thinks it is against what JAMES believes in.
Episode 11: Florida is offered a role in a TV commercial paying $5000, but decides to get a fucking conscience because of the product.

Season 2…
Episode 7: Thelma is on one of her several suitors who will propose and get her out of the PJs, but her parents ain’t having that shit due to the fact that it was Lou Gossett Jr, who was already old when this happened.
Episode 12: This one pissed me off.  James finds enough money to move NOW.  It happens to be bank robbery money.  Florida demands that he return it.  He returns most and then gets shit on with only $50 in reward money.
Episode 14: James interviews for a job that is eventually offered to Florida instead.
Episode 16: JJ gets a paid offer to paint a nude portrait of a woman for her husband.  Naturally, Florida quashes this.
Episode 17: Florida suggests that James go into business which winds up violating the lease and damn near gets them kicked out of the apartment.

Season 3…
Episode 1: (note: this episode CAUSED this post)  James is offered a WONDERFUL job.
…  in Alaska.
It made too much sense, so Florida hired some goons to beat Michael up and keep them down.
Episode 5: Wait…  Florida had a rich cousin for 42 episodes and two pilots all this time and they HADN’T leaned on that resource to not be in the projects?
Episode 14: So what Cleatus MIGHT have robbed a fucking bank?  He robbed a bank!  Keep him low for a minute and leave the damned ‘jects!
Episode 19: Three words…  Sweet Daddy Williams.
The problem with the Evans parents, especially Florida, was their unwillingness to take legal money from unsavory people.  Who cares he is a number runner and a pimp, he just wanted to overpay JJ for some art!

Note: John Amos was out as James Sr. after season 3, they fired his ass to make sure we knew that Black families don’t have fathers.

Season 4…
Episode 3: JJ has himself a cougar who is willing to move him in and cultivate his talents, but Florida is concerned with the cougaring.
Episode 8: JJ has a new job with number runners and is making money hand over fist with plans to get out of the ghetto.  Florida kills it and someone winds up shot or some shit like that.
Episodes 10 and 11: Florida is becoming distant from the kids she seems bent on trapping in the ghetto.  They make plans with her, she flakes and goes out with the homies instead.
While she is out with the homies and shit, JJ manages Michael’s singing group and gets them a gig and NOW we have a doting mother who wants to protect her kids from getting the fuck out of the projects.
Episodes 15 and 16: Look…  We’ll just chalk this up to another of Thelma’s romances that were torpedoed by her mother.
Episode 19: Michael finds income and Florida buttfucks it because she disagrees with the morals of his boss.

Let us mention Carl Dixon now…  Florida Evans had, by this point in the series, made EVERY possible move to keep her children in the housing projects.  She met Carl in season 4 and moved the fuck to Arizona with him while the kids stayed in Chicago (!!!) to be watched by JJ and Wilona.
Florida Evans was the worst thing to ever happen to her damned kids.
And let’s make it even better.  Carl Dixon is the shop manager from the above-mentioned episode 19.  How does she go from “my son can’t work for you” to marrying the guy?

Really, I can’t blame Esther Rolle for the actions of Florida Evans.  I blame Normal Lear and his people.  She was so against JJ’s buffooning, but plied with money and empty promises.  She was against single parenthood when they had to fire John Amos and kill James off, so they wrote her ass off too to prove she needed them more than they needed her.  Esther Rolle had the hoteppest of intentions at heart (with the exception of not letting – no, MAKING Thelma become one of Ibe’s several wives), but was totally blocked by the continuing war between Hollywood and Black Americans.
black hollywood black people love chicken black power hotep hotep hollywood hotep shit television