First thing’s first.  No one is paying me to post this.
[Note: if you want to, though, the PayPal link is on the left]

Now that we got THAT out of the way, let’s get down to it.
September 2014, my iPod Nano finally succumbed to too many drops and started to bust open at the top.  I had gotten it second hand and I was not about to lay out the cash for any Apple product at the time.
I went with the Sony NWZ-E380 Walkman and it served me masterfully for years.  Gym duty, outdoor workouts, sitting on the couch reading/writing, yard work and most importantly, DAILY droning out of office chatter.

“Well why don’t you use your phone for all that, Phlip?”

Thanks for asking, I USED to use my phones for all of that, but I found myself in possession of charger-dependent phones due to the constant need of charge due to 8-hours-a-day constant usage.
Anyway.  Syncing the Sony last week brought me to the realization that it has met its demise.
I sent it on to glory (did you sing that line?  I did!) and jumped on the eBays, so as to take advantage of 10% eBay Bucks AND 5% Ebates cash back because, well, I hate paying full price for ANY damned thing.
[Phlip note: get Ebates from that link, $10 gets added to you now.  Add the app to your phone and Google Chrome and it will automatically catch %-off deals for you as you shop, then apply them]

Again, no iPod for me, and I was wary of another Sony even though I had eked 3 years of abuse out of mine.  I looked at some Chinese brands and one I kept arriving back to was Benjie.  They seem to be the one that makes the players that are re-branded for use in other regions and to me that meant that I should be looking at THEIR stuff.  Two that grabbed my eye were the K9 and the T6 (<-- i="" later="" more="" on="" one="" that="">.  The K9 was readily available from some US sellers and the T6 was solely in Asian markets.  One called the AGPTek Rocker V2 is an identical player, but it twenty full dollars more in exchange for being available stateside.  In my haste like a dummy, I ordered the T6 and saw a 2-3 week wait, then got the K9 too from this seller.
Two days later, the K9 arrived from a shipping place about 200 miles from my house. 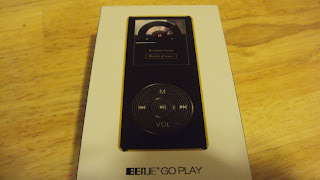 "This little box is pretty damn slick!" was my first thought.  Looked like it would belong to a much more spendy piece than what was coming out of it.  Also, the box was tiny.  I am used to having things come out of a box three times bigger than necessary.  Naturally, the inside was all business.  USB cable that I immediately banished to the snakes nest in my desk drawer with the ones from every other device I have bought for the last 8+ years.
Taking the player out of the box, I was greeted to a seamless black metal body (good) and a smooth face beautifully primed for my fingerprints and clickety plastic buttons that I was worried my hands would destroy (potentially bad, but remains to be seen).  This little device is pretty heavy, surprisingly.  Also, naturally, the package included earbuds.  I looked at the buds and immediately gave them to my daughter.  I don't imagine they'll be horrible, but I'm used to the kind with the rubber tips.  Good thing I keep 3 pairs in my desk drawer at work for that very reason.

Interface:
I was worried about the ease of use that would come with a player that had only cost me $25.69 with free shipping.
First thought: crap your pants because it comes out the box with the volume set to MAXIMUM! level already.  If you go behind me and get one, fix this problem first or keep an extra pair of drawz on hand.
Next: I spent the previous years getting used to Sony Walkman in a phone and actual dedicated player, plus the four before that with an iPod Nano.  This was a change of pace, but I kind of pride myself in my ability to learn new things quickly, this is not insurmountable.  At first, it was a bit frustrating to learn but becomes easier once you get used to it.  I say that with one day of use so far.

Adding Music:
I dislike iTunes with the burning passion that one reserves for the man who they saw murder a family member.  Well, maybe not THAT bad, but I prefer to use MusicBee (Windows only) to sync music to my portable devices.  I imagine drag-and-drop will work as well, but I go with the devil I know.
8GB internal storage is plenty enough for most people, especially those who acquire and change music often anyway.  If that isn't enough for you, the unit has a MicroSD slot and accommodates cards up to 32gb. Unfortunately, you're only allowed to use one or the other at a time.  Due to a fickle phone that only likes expensive memory cards, I had a few SDHC cards laying around the house and the car, I erased the homemade porn from it since I won't be living alone soon and popped it in before syncing the music to it.  This will take up to a 32GB card, I popped in the 16.  The sync was super slow, but overall free of issue.  One thing I do NOT like is the fact that the files go into the device in alphabetical and not album order.  When I synced them to the SD card, they actually played back in album order though.  Crisis averted.

Sound Quality:
Like the interface, I was wary about the sound quality that I would get, but again, I bought this as a stop-gap for the higher-featured T6.
Playback is gapless, which is perfect for people like me who don't like that short pause between tracks one normally experiences on cheapy players.
Sound quality is better than you would expect from a $26 device.  Took a couple of tries to get my Beats Solo HD plugged in properly.  No problem with my buds here at the office.  Sound is good enough to get me through work days without having to listening to coworkers babbling, but may not quite as great a sound as could be had with the players it is replacing.

Value for the money:
$25.69… That is 513 nickels and 4 pennies.  If not for the need of PayPal to make payment, I probably could have cleared that in my couch cushions or under my bed.  As long as the sumbitch WORKS and stays working for a few months, I will have gotten my money out of it. 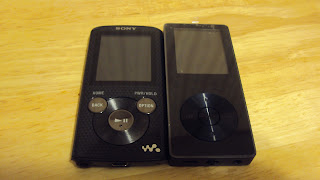 Dead soldier on the left, replacement on the right.

In all, I am glad I took this player, and it will likely be the one I leave at work where I need a wired player for my earbuds there.  I will use the T6 for its Bluetooth functionality while I work out when it arrives.


I happened to find the unit decently easy to use (to me, it is far from what I would call "natural") and that it behaves well beyond my expectations rooted in what it initially cost me.

Would I suggest a purchase?  For the price, hell yeah!
Will I probably like the T6 better because I read the reviews on it first?  Abso-damned-lutely.
audio player electronics gadgets MP3 product review review