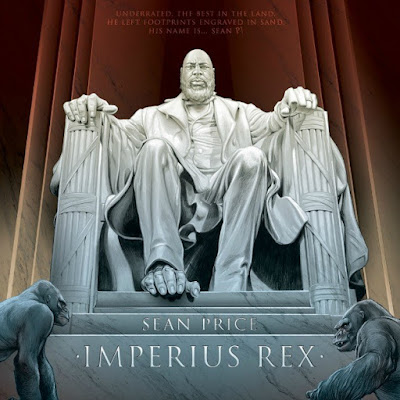 In the mid-90s, I was a high schooler. I feel a certain way about the hip hop I allow myself to consume.

Summer 1996, Heltah Skeltah released Nocturnal, an album unlike anything I had heard to that time and I was a fan. At the time, I thought Rockness was the better lyricist of the two but they were both entertaining enough as a collective to hold my attention. I HAD to have listened to that album every day senior year.

Things happened, the duo split for a while and Sean Price started making solo albums...
Great. Fucking. Solo. Albums.
He was new to many, but simply getting better at his craft to the ones who remembered.

Unfortunately, on August 8, 2015 Sean passed in his sleep.

On the second anniversary of his passing, we get his second posthumous release, titled Imperius Rex. The conventional album release day used to be Tuesdays but that was abandoned by most a couple of years ago. I am going to go with the coincidence of the release date, anniversary of his passing and the fact that it was a Tuesday as NOT a coincidence.


Let’s talk about this new release from one of my favorite rappers.

1 - Imperius Rex
We get Elijah Price spitting a couple of  his dad’s old bars, and then we get RIGHT to business. This beat is HUGE.
I love how we got right into it on this. As ever, he drops a couple of mentions of Planet of the Apes, referencing the Rise and Dawn movies.

2 - Dead or Alive feat. Bernadette Price
Good of them to get the man’s wife involved in the project early on in the proceedings.
I was expecting some spoken word, she actually got on the song and spit the hook. I am impressed. I wonder why they never did this before. Another beat I happen to like a lot.

3 - Definition of God
I love how each song thus far has had samplings of Sean's prior work in the scratches around the hooks.
I don't know how much Sean had personally in the choice of beats and production on this album, but whoever DID has done a wonderful job of matching these backdrops to his rhymes. Third song in and I have not heard one I would skip yet. This song ends with Sean doing his Stephen A Smith impression. Got a chuckle out of me.

4 - Ape in His Apex feat. Ruste Juxx
I almost know what to expect on this one. Sean was always about the concept of his albums, and this "ape" thing is one he has leaned on hard. The organ in this beat is amazing. The alliteration with the "sh" in the middle of the first verse was fucking ILL.
Ruste Juxx comes in with a “Ruste Juxx verse,” and those are always worth the price of admission.

5 - Apartheid feat. Buckshot & Gene
First thing I caught was the Tenor Saw sample of Ring The Alarm. Topically, the hook in patois, then Buck comes back to his regular flow to finish his verses. I am more impressed with Buckshot than I usually am with this one. Gene's verse at the end was impressive, and I like how the song just ended cold.

6 - Lord Have Mercy feat. Rim P & Vic Spencer
If one song to not be impressed with was an inevitability, then I have found it. The beat is really laid back, and the hook is an earworm.
Never been a fan of Vic Spencer's flow either. Commitment to the task of completing this review is really the only way I made it the whole 3:35 of this track.

7 - Negus feat. DOOM & Ike Eyez
This is a loping and slow beat. I like it. I didn't get as much of Sean Price on this song as I would have wanted, but I am cool with the guests enough to not have that as a damning complaint.

8 - Church Bells feat. Junior Reed
This song is making me wish I had thought to put Junior Reed album on my player to listen to after this album is over. Sean comes in aggressive and disrespectful as we loved and will miss of him. So far, this might be my favorite song on this album. I listened three times before moving on from it.

9 - The 3 Lyrical Ps feat. Prodigy & Styles P
Weird seeing this after what happened to Prodigy back at the beginning of this summer.
Holy HELL that Prodigy verse though! Easily one of his best, in my opinion. Styles is Styles, and that is to say he is consistent and fully fit to give the last verse of a song. I listened to this one twice before moving on.

10 - Not97 Skit
All I can say about this is "lol."
Funkmaster Flex is somewhere upset that he cannot respond to this.

11 - Refrigerator P!This beat is damn good. It set me up to think I was going to get a good song over it and I was more than pleased with what I got.
Something that I am beginning to notice on this album is that there are a LOT of features. There is not one on this song and I think that very fact was what made me notice it.
Don't let my dalliance into that little detail make you think that there was something wrong with this particular song.

12 - Prisoner feat. Freeway
I am sitting here surprised that Sean Price and Freeway haven't worked together before. Freeway is one of those people who has either gotten WAAAAAAY better through the years or who took a long time to grow on me, but his input on this song was damn good. Well worth the second listen.

13 - Resident Evil
Back to the alliteration at the beginning of the fitst verse. This beat is funky. I mean, literally, it sounds like a funk song. That is not a complaint, not in the least.  The rhymes in the song speak directly to that, so one can only assume it was on purpose.

14 - Clans & Cliks feat. Smif N Wessun, Rock, Method Man, Raekwon, Inspectah Deck & Foul Monday
Clans and Cliks… Wu Tang meets Boot Camp. Slick...
Oh shit, the song is playing!
This song is fucking amazing. Sean drops some gems, referencing Wu Tang lines from years past. Raekwon gives a verse showing skills he has not brought to his own albums in quite a while. Same for Method Man. I wish Ghostface was on this one.

15 - Rap Professor
I have heard this rhyme before.
I am not mad at it, it was one of my favorites from one of his freestyles on the old mixtapes. That I am 15 tracks in before hearing rhymes I have heard before on an album from someone who passed two years ago is surprising and refreshing. The second verse was rhymes I have not heard before, so all is well.

16 - Price Family feat. Bernadette Price
And you finish things off with the man’s wife as well.
This was well-played.  Fuck, she can rhyme!  I wonder if he wrote her rhymes or if Duck Down has been hiding her for all of these years.  My only real gripe with this song is that I wanted more Bernadette on it.  The All In The Family thing at the end was pretty funny though.

I am not at all surprised that this project happened, knowing the amount of work that Price was said to be recording up until he passed. Given how much better he got in his last 10 years than he was before, I came at this project with pretty high hopes as well. Suffice it to say, my expectations were fully met with this one. I look forward to the album he is rumored to have recorded with Lil Fame of M.O.P. to see the light of day.

I don't give "star" ratings, I am only here to say whether or not an album was dope in my own opinion. The answer to that question is likely loaded with my preconceived biases, but I am saying for sure that this is a damn good album.
album review music opinion rap rappity rap