I used to think it was only Hollywood that didn’t love us.  I am coming to find out that apparently video games are much the same.  Want some more of the Black Friend© Pet Negro™ Happyslave Junction?  Fire up your game console and wait for the rare black character to come across the screen.

We decided to come up with our own community-based solution to the problem.
Hotep…  The Video Game.

I lack in the skills necessary to make this myself, so I am yet shopping the idea around to various game houses.  I tried selling to the guys who made me wait 94 months for the painfully average Mighty No 9, but they still won’t return my messages.  I know they need the money!
I figured I would start with 5 levels and each would end with a “boss battle” of some sort.

Level One – “Break The Chains”:
In this level, you enter on the ground floor.  We place you in situations that place your Wokeness® into question and must choose the higher path.  For the sake of this level, the goal is to make the motions and decisions that lead up to you leaving your little office job in this white man’s world and going out into the world to make something of a future for you and your babies.
The boss of this level is your actual boss, and you’ll find yourself having to fight through a wall of security that has been called as you started to make a scene demanding your last check 8 days before payday.

Level Two – “In This White Man’s World”:
The name of the game in this level is staying afloat.  In a dearth of traditional income for deciding to quit your job and chasing an erstwhile undefined dream, you are faced with turning to the streets for income, be it legal or dabbling in various levels of illegality.  “Various levels” is defined by choices like getting up at 6:30am to stand at Home Depot for day labor and daily cash, or to wait until 6:30pm and selling weed to the day’s laborers returning with cash.
This is one of those multi-boss levels, and the difficulty is exacerbated by the decisions you made.  Like, if you choose the day labor side of it, you have to deal with ICE.  Being a legal citizen, it is a mere inconvenience.  If you choose the weed, though?  You have to deal with the REGULAR cops on a random-ass DWB stop.  If you choose to knock on doors and do the handy man thing, you have to deal with oppressive heat and old ladies who won’t open the door all the way to give you water.  But if you choose to kick in that old lady’s door?  You live in a castle doctrine state.  You get it.

Level three – “On the Home Front:
You, Black King, have the weight of the world on your shoulders out there in the world trying to make it home alive every day.  This level, in and of itself, will be a boss level.  Why?  Because coming home after being in a fight with the whole damn world, it will be time for round two.

“You don’t take me out anymore”
“I see ya little friend liked ya FB pic”
“You could at least change a diaper every once in a while”
“I don’t know…  I’m just not happy anymore”
“YOU FORGOT [random mundane task] AGAIN!!!”

You get it.  The fucked up part of this level is that there is no “win” to it.  The goal is to make it to the end of the level without a domestic violence charge or adding the caveat of homelessness to it.

Level four – “Handle Your Household”:
After all the shit you navigated in levels 1-3, it is time for some YOU time.  You should, by now, have the necessary verbal skills to get your woman and a couple others on the team and this is the level upon which you prove it.
This will be a puzzle level, you will have to select the words and place them into a pattern, each successive pleasing pattern used will up your points more and more and eventually you get the girl.
“But what about the woman in level 3?” I can hear you asking.  My response is that y’all apparently haven’t been paying attention to what gets said around here.
The goal of this level is to get enough women WILLINGLY in your household as possible to the point where you no longer have to go out in this world and fight it.  This fight needs your LEADERSHIP, not your actual blood, right?

Level five – “Every Black Man Ain’t a Brotha”:
You’ve been through a lot thus far.  Stress at the (now-former) workplace.  Stress at home.  Stress out in the world.  It is all DESIGNED to hold you back.
The only thing that could make it worse is if they somehow infiltrated your community and had one of your own shitting on what little progress they allow you to make, right?
Right?
Exaaactly.  You got the coon up the street now.  “Get a job, cut your hair, straighten yourself up some and come be ‘one of the good ones’ like me.”  Along with him comes the monsters that sell drugs to kids, creating the same kind of fiends that come into your house and take what’s yours.  It is an every day struggle.
The worst part of that struggle?  You can NOT easily tell.  So the point of this level is to properly differentiate and select the Black King who is in this with you, and not the coon or the monster.
…  but that ain’t it.  Iron sharpens iron, so it must be determined in one last boss battle if you have truly arrived, or if you should go back to level one (no saves) and start over.
You have to spar with THIS dude: 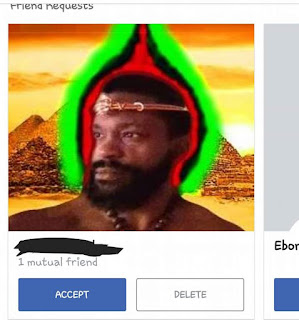 (and yes, his avatar is janky AF, JUST like this)

He is all kinds of disrespectful to you since you’re new to this and he managed to quit HIS job two years ago and one of his wives is just about to start a non-profit for them to funnel all of his other wives’ money through to avoid income taxes.  You gonna be a coon and snitch on him or do you get on the team and benefit.  Wait, why you wanna be on the team so bad?  You trying to take his shit?  Why ain’t you strong enough to start your own shit?
ankh-right black people love chicken black power hotep hotep shit video games