Some Thoughts on Game of Thrones S7E7 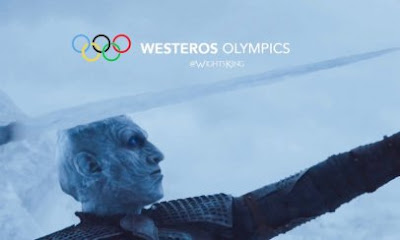 (Warming up for the Winter Olympics next year)

Okay, so apparently the word “spearchucking” is offensive to some people.  Like, even when describing someone who is depicted ACTUALLY throwing a fucking spear.
I won’t apologize.

Warning: I will talk about things that HAVE happened on the show and while some might call these “spoilers,” I do not since the shit has been online since Thursday and available through all official avenues since last night.  If you haven't seen it yet and don’t want spoilers, please close your browser tab.

I won’t approach these like a normal episode recap, because you should have known not to expect normal from me.

Before I continue, I have a couple of questions/observations…
Remember in earlier seasons, when it would take a character/group several episodes in a course that should represent several weeks to move from one place in Westeros to another?
Average horse footspeed is what?  6mph?  By my quick math (and I don't math good), it should take at least 10 days by ground to get from one place to the next and probably longer by boat since I don't think there are any engines on those things.  This was a point of my disbelief in last week’s episode that I feel I need to make now.  Gendry should have died halfway through his sprint back to the wall.

… okay, I will continue now.

This episode begins with me questioning what useful niche Bronn continues to fill to have NOT been killed by now, other than being Jaime’s partner in some weird buddy cop movie.
Never mind, he was not on the screen for long anyway.  The (remaining) leaders were due to converge upon King’s Landing for a bit of a parley, as set up by Jaime and Tyrion in their much-maligned (by Cersei) secret meeting last week.  Euron being Euron decided to try and dick it up, needling Theon and was swiftly told by Cersei to shut the fuck up while grown folks were talking.
The prize of last week’s Dummy Mission was released from the crate they had it UPS’d in from north of the wall.  After it attempted to attack and the method of disposal was demonstrated, Euron decided he would go clean the shit from his pants back home on the Iron Islands.  The meeting reminded me of an episode of Aqua Teen Hunger Force. 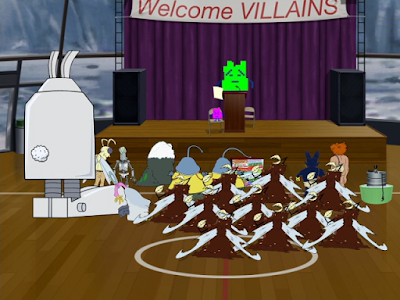 With proof that the undead beyond the wall actually exist, Cersei plays willing to fight, but waffles when she thinks she is being set up in the same manner she would ASSUREDLY set everyone else up.
Bitch.
Anyway, fearing a much-deserved double-cross, she refuses to play nice unless everyone bends the knee to her.  Jon refuses, explaining he has already claimed a queen (note: he STILL hasn’t fully committed to being a subject and not a king) and fucks the whole deal.  Everyone involved shits on him for not lying.
Except, of course, Daenerys, who we can fully infer he has now sealed the deal on with that line.

Never mind that for now though…  Let’s go back to Winterfell.  Sansa is sitting around making shitty faces as Littlefinger continues trying to sell her bullshit and tell her it smells like lavender.  It looks like he is JUST about to succeed when she calls her sister in for a trial of sorts.  Tension is SUPER high, when she lays out a list of charges and Baelish grins smugly until the moment when (predictably – to me at least, I called the shit last week) she lays it out that she is charging HIM with all of those things.  He asks for a chance to explain or redeem himself, but Sansa presents him with the receipts.  By “receipts,” I mean Bran is FINALLY telling us the shit he should have been singing since the moment he arrived in Winterfell.  I cheered harder than I probably should have, but I was ready for him to go back to being the mayor of Baltimore.

Back in King’s Landing, Tyrion has talked some damned sense into his sister.
Or as much as she is willing to have talked into her.  Apparently she thinks that she can defeat the prophesy and that we’re supposed to believe she will HAVE that kid she is supposedly pregnant with.  She goes back out to the meeting of her enemies, minus Euron, after speaking with Jaime and suggesting that she would have The Mountain kill him but not going through with it. 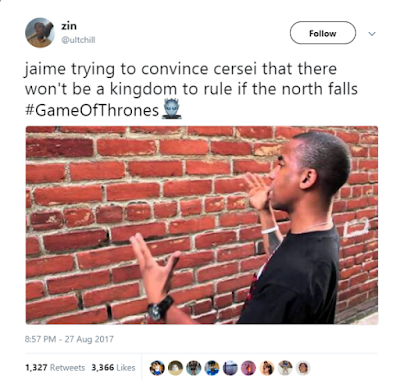 [Phlip note: The Hound and The Mountain did not have that epic fight we were not promised but were totally fucking promised so I am not wasting any more words on them]
Cersei is so damned hell-bent on creating the line to the throne that she will keep squeezing out inbred babies to do it.  She explains such to both of her brothers; she could give a fuck less about the future of humanity or what shitty things she has done to speed that future on by.  She is concerned with her name on that future.  Hence that baby that we soon learn has no birth rights to the throne anyway.

Oh shit, that part!
In the worst kept secret on the internets, R+L=J is a thing and has been hinted at in past seasons, then ham-fistedly revealed in an earlier episode when Samwell decided to complain about cleaning shit instead of acknowledging what was being given to him.
Oh yeah, apparently only Samwell is still bound by the rules of travel around Westeros.  But was he, really?  Sure, it took him two episodes to get from OldTown FAR in the south and one can infer that he stopped to find his dad and brother had been torched on his way north to Winterfell, but that trip should have taken him at least a month.
Anyway…  Upon arrival, he has apparently taken the time to listen to what he was being told or perhaps this news was his reason for going AWOL in the first place.  He arrives to Winterfell to tell Jon about his parentage only to find that Jon is on the way back and that Bran has made it home but for the most part has been replaced with a computer as far as his personality goes.  Well OK, Computer, we get confirmation that Jon was born in Dorne and shouldn’t be a Snow, but a Sand, but we further learn that he is also not a bastard, since his mother was married to Rhaegar Targaryen anyway.  This blows holes in Robert’s Rebellion and literally everything we believed was a lie.  If Rhaegar didn’t abduct and kill Lyanna, there was no reason for the war that saw the Barratheons and Lannisters take the throne.  As a legitimate non-bastard, Jon Snow Aegon Targaryen gets immediate birth rights to the throne, especially over that inbreed Cersei is carrying.

But doesn’t that make Daenerys his--…
Yes, it makes her his aunt, which makes for that incest sex they were making as this was being revealed all the more weird.  We spent far too much of the past two weeks discussing whether or not she was able to procreate and Jon nephew Aegon mentioned that perhaps her diagnosis was bunk.
Also, I was right when I was taking bets on him getting the drawz this week.  I will take payment via paypal.
Anyway…  My theory is that he is now carrying his Targaryen baby and he is the rightful king, not only in the North but of the seven kingdoms. 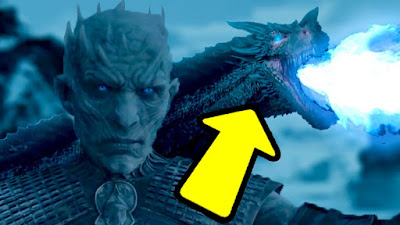 No®
The fact that Cersei ain’t having this shit notwithstanding, The Night King has apparently already learned to fly that dragon he stole the previous week and the fact that said dragon has already buttfucked the wall will spell MAJOR problems in the coming season.

They say it will be two. damned. years. before we get season 8, mainly because production requires that they film in ACTUAL winter.  We have a lot of shit about to happen though…
-   Jon Snow Aegon Targaryen is the rightful king.
-   Cersei will have a total shit fit when this is revealed.
-   Cersei won’t beat the Night King with money.
-   Your president is still a fuckboy. 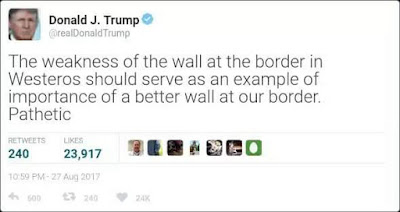