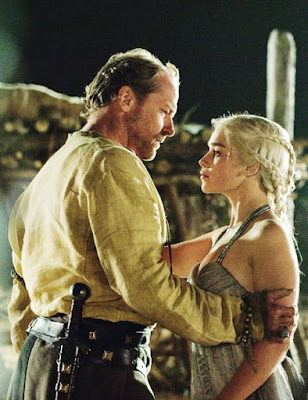 I will begin this by saying that if you don’t watch Game of Thrones or haven’t read the novels upon which it is based, I thank you for your visit to my site and would love for you to share with your friends, but you should probably go ahead and leave now.
Now that we got that part out of the way…

Jorah Mormont of Game of Thrones has reached a Hall of Fame-level depth of friend-zonedness.
See we know the actual, regular friend zone where a dude expresses interest in a woman and that interest is not reciprocated but instead of setting him and his feelings free to pursue someone who MIGHT reciprocate said interest, she tells him he is a “friend,” and keeps him around for the attention that friendship tends to come with.
This is problematic in general because he is left thinking that access will eventually lead him to where he wanted to be in the first place.  Unfortunately, it is more like an unpaid internship that ends with a handshake and a “good luck, buddy!” instead of a job offer at the end.  When you ASK for said metaphorical job, she responds with “oh, but you’re like a brother to me!”

So now we come back to Game of Thrones.  Jorah Mormont is a fuckup and disgrace to his family, bankrupting himself to fund the lifestyle of an ungrateful wife who leaves him for a dude who promises to enslave him if he doesn’t pay for her shit.  He runs away and does some illegal shit to pay for it, and is now afoul of the law and must die.  Instead of being beheaded, he chooses to run away until he finds a better situation and perhaps some cash to return.  While away, he embeds himself with some foreigners who accept him until one day they are sold a queen who is soon widowed JUST in time for him to fall in love with her ALL while supposedly spying on her to hopefully earn his freedom from the chopping block back home.
But keep in mind, this queen is supposedly only about 15 years old and Jorah is old enough to be her GRANDFATHER.
Anyway, her husband dies and she keeps his supporters and Jorah hangs out to be her first knight as well.  He assists in her conquests and serves as an advisor on the goings on back in King’s Landing.  In her conquests, she falls for someone OTHER than him and he has to watch from the friend zone as she gets with Daario Naharis in spite of his disapproval.

After setting the goods out to Daario, Daenerys learns that Jorah had been spying on her before and almost got her killed and had to suspend him from even friend zone access, kicking him the fuck out despite his apparently having turned over a new leaf and swearing love for her.
This is where it gets fun…
While kicked out, he happens upon Tyrion – who himself was exiled – and decides to deliver him as a “gift” to Daenerys to get into her drawz good graces.  But then they (Jorah and Tyrion) wind up captured and enslaved, then sold to people running fighting pits in a place where Daenerys just HAPPENED to be preparing to free some slaves.  She encounters him and has him freed, but doesn’t allow him back into the friend zone her circle of influence yet.  Not until someone ELSE tries to murder her and he quashes the attempt.

Unfortunately, her hapless ass escapes and is captured by her dead husband’s people, who have customs to abide by.  Now Jorah – with her NEW dude(!!!) – has to locate and free her.

Wait, hold on a minute.

Going with the woman who you’re interested in’s new guy to rescue her from a kidnapping of sorts is the GoT equivalent of a dude taking a woman out for dinner and a movie, paying for the WHOLE date, then letting another guy fuck at the end of the night. 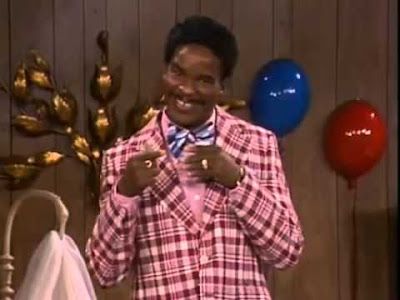 (this guy approves that kind of a thing though)

Back to business…
They find her, can free her, but she has other plans.  She burns down the ENTIRE shit without bothering to walk out to avoid being burned and doesn’t burn anyway.  Now she has made believers of everyone and Jorah REALLY wants the drawz now.  I seriously bet he might have killed Daario to get her if the chance was suggested.  Professing his undying love now, he has POTENTIALLY regained her good-enough graces to be in the fold again.
-BUT-
“Oh shit, you got grayscale…  Get your leprous ass away from us before you kill us all, don’t come back until you figure that incurable disease out.”

And this is where we attain the “Dad Zone.”
See, the friend zone is where you’re “like a brother,” but the dad zone?  Man, when you’ve arrived to that station in life, you might as damn well end it all.  There is just NO recovery from some shit like that.  “You’re like a father to me,” even if only suggested and never actually spoken, is the unsexiest thing one could ever hope not to hear and then hear anyway.

Anyway…
Away becoming the first person in modern history cured of this shit.  Daario is out of the picture and she has taken kindly to his “gift” of a Lannister and has taken Tyrion as her Hand.
Everything is good, we on now right?
Right?
Nope®
Because we are in season 7 now and Jon Snow has since arrived to her place and is inadvertently putting the moves on her without even TRYING and everyone with eyes can see that the shit is working.

Damn you, Dad Zone…  Got Damn You!!!
Now Jorah has to watch as a captive to the woman he loves and is in love with as she slowly falls in love with someone who no one witnessing happens to realize is actually her damn nephew.  You know what he can do about it as it is happening?  Not a damn thing!  He has to let that shit happen and let her be happy.  He has to do STUPID shit, like joining that stupid plan to kidnap a Wight beyond the wall and attend the parley with Cersei in the dragon pit and pretend he didn’t cry into a dirty gym sock while Aegon Targaryen Jon Snow actually GOT the drawz that he himself had been pursuing since she had to put her husband out of his misery several years prior.  I seriously bet that Jorah texts her every morning at 5:31am pouring out his heart and shit so he will be the first thing she reads every day and she responds at noon (or later) with "lol, that's cute." 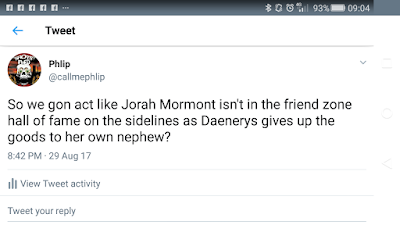 Jorah deserves a horn of ale, or a handle of Bourbon, or SOMETHING.  Shit, this man has endured so much in what we normally refer to as the friend zone that we had to invent a new level JUST for him.
dad zone daenerys targaryen friend zone game of thrones jorah mormont relationships