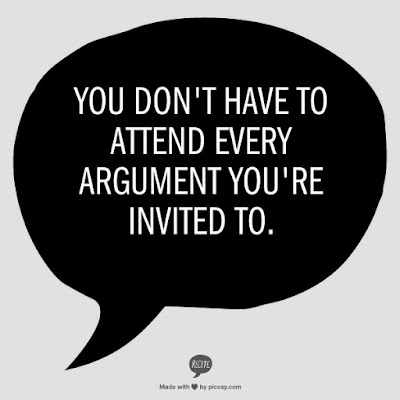 Being mad and angry will sap the energy out of a person.  I don’t have a lot of that to spare, and none laying around just to be giving out and shit, so I tend to no let things get to me a lot of the time.  The beauty of staying cool under the heat is how that in itself is enough of a response to send whomever is acting out deeper into their rage.  Try it when you get bored.

Another thing I do is apply silly humor to an otherwise serious conversation if I feel it might head in a direction that might soon turn too ugly.  Mainly, this is done to make someone who did not want to be amused laugh at you anyway to diffuse a situation.

She walked out of the room for a little while and came back with a clearer head about it all.  By "clearer head," I quite obviously mean that she beat me as she is wont to do at times when I am cutting up.  Perhaps it was the fact that I washed the dishes and got the cheese off of the ceiling in the kitchen.

Last year, I’m with my daughter minding my own business in the play area in the mall.  Naturally, there are other kids (and, ostensibly, parents) there as well.
[Phlip Note: fuck chronology, I tell stories in the order I remember them, not the way they happened]
I promise, I am minding my own damned business.
This lady comes over with her daughter and sits approximately 8 feet and seven inches from me.  Just close enough for me to smell her fragrance and witness her cleavage…

Y’all know me very well, “witness her cleavage” was something that was done before the rest of her was fully in eyeshot.  Hell, it was mid-July, I would have been more surprised if they WEREN’T out.
Anway…  She sits down at the other end of the bench and I spent a bit longer admiring the titties than a non-creep might have done.  Big mistake…

Ava and three other kids heard me and knew EXACTLY where it was from and came in singing the next parts of the song.  Torn between the FACT that I was literally staring into prodigious titties just 73 seconds earlier and the fact that I weaseled out of it with a fake song only to have the situation immediately cutened (my new word!) by a chorus of 5 year-olds immediately recognizing and singing along was overwhelming.  She tried to change the subject and be all nice and shit after seeing what I did, but I’m happy at home and never took it past cordial conversation while keeping titties in my peripheral view before leaving.

Enough of the silliness…  I have learned why they tell you at the zoo “don’t feed the monkeys.”
That’s a metaphor.
People will try you, even if they won’t directly call you by name.  Don’t give into it.  I accomplish this with humor most of the time, even when I am the only one laughing.
don't feed the monkeys fun times life music silliness true story