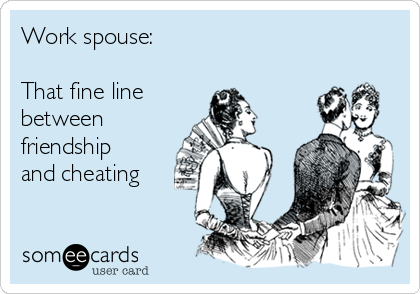 School is back in, which means the whole of the employed population are now carrying their asses back to where they earn their paychecks.  Some people sandbag the whole or most of their leave time to spend summer vacations with the kids.  Some are teachers themselves and will stay home during the summer instead of a part time job in the in-between.
Either way; working, off work or on vacationing with the kids…  It is all over now.

So Monday afternoon on my lunch break, I stop to put gas in my car and the guy at the pump next to me sees a friend of his going into the store and they stop and have a quick conversation…

I should note that I WANTED to interject that the “work husband/boyfriend” is usually just a tongue-in-cheek joke about a friend in the workplace and not any statement of any real relationship.  I DECIDED, however, to mind my fucking business and let this shit play out.  My gas tank was full, but I wanted to see where this would go so I used the mysterious blue water and squeegee to clean my front and back windows.
They continued…

And with that, the two old friends parted ways.  To be honest, I was torn somewhere between minding my business and wanton voyeurism in my approach to this.  I KNEW better and that the “work spouse” is usually something wholly innocent between people who happen to have to spend 8+ hours a day in close quarters and it ends at the end of the shift every day.

Apparently, though, this dude lacks internet access now or doesn’t understand that this is a concept that is as old as the ubiquity of women in the workplace or AT LEAST as old as Faith Baldwin’s 1930 novel on the same concept about a minister and his secretary.  Apparently he has met the guy, they have been to each others’ houses, their kids have played together and they have eaten each other’s food.  They are (on the surface) happily married and his wife is home promptly after work every day and neither of them make time for outsiders.
-But-
Somehow, this man that his wife works with and whose hand he has shaken has worked his magic on his wife and is secretly trying to put his Pennsylvania into her Virginia at the first possible juncture.
This is just the kind of wanton fucking stupidity that a True Story© is MADE for.
…  so now it is Wednesday.  TWO days later, right?
I am preparing for my own daughter to return from her mother’s house to me.  I am getting her snacks for the week and weekend, knick-knacks and other random bullshit.  I go to a family dollar up the street from my job, roughly a half-mile from the gas station I stopped at on Monday.  The clerks are talking and I walked in on a conversation that caused me a bit of déjà vu.

Apparently at the school of one of the clerks’ son, one of the male teachers was assaulted after school on Tuesday.
I slow-walked the store listening to a story that sounded eerily similar…

“yeah, apparently just whooped his tail right in the parking lot at the end of the day after the SRO (school resource officer) had left for the day.  She said he came out to his car to find the tire was flat and--…”

I am thinking “awwwww fuck, I know how this ends!”  She continues…

“… well then he gets his spare stuff out of the trunk, takes off his shirt and tie and is on his knees attending to it when someone runs up behind him and knocks the whole shit – sorry sir – out of him and then beat on him some more before running away.”

I was as white as someone who looks like this could ever get.  It was almost as if I had WRITTEN that beatdown…  Two Times.
I had the luxury of being able to laugh at the fact that she had cursed in front of me, because I could use it as an excuse to hide the fact that this damn knuckle-dragger apparently DOES have access to the internet if he is reading my stories to copy and STILL doesn’t know what a Work Spouse is.

This morning, though?  I feel bad as shit because I WATCHED this series of unfortunate occurrences set itself up and didn’t do anything to stop it from taking place.  I let my petty curiosity get the better of me and got the outcome that I kind of knew was coming.
Wait…  No I don’t, I don’t feel bad at all.  You can lead a horse to water but can’t make em drink.  Well I don’t know how the fuck to lead horses.  If the information is available and he chooses to ignore it, he can enjoy that felony aggravated assault charge he is about to catch.
marriage relationships summer is over summertime true story work husband work spouse work wife