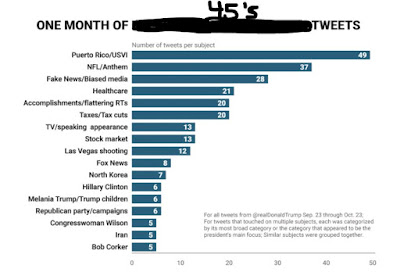 Look, I can neither confirm nor deny the existence of a ghost writer in the sphere of 45, BUT whomever is writing this dude’s raps on that special Twitter back channel I discovered a couple weeks ago [post] is getting better at that shit.

Following the above graphic about his recent twittering habits as it relates to drilling in on distractions and not actual issues, it appears he was in a rappity rap mood this afternoon.  Hillary, Obama, Kim Jong Un and his electoral victory were (typical) his preferred topics.  Read more below. 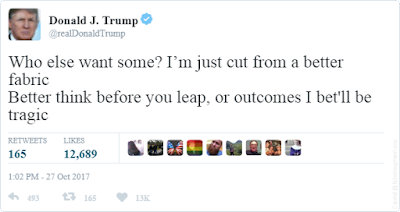 Extra points for use of the word “pathic,” suggesting that Michelle is a man and Obama enjoys buttplay.  Whomever is writing this shit knows strange nuanced things about the language that no normal people are fucking with these days.