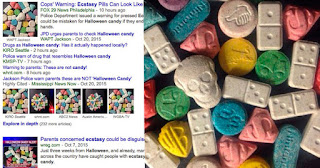 My previous brushes with DARE [link 1] [link 2] notwithstanding, there is apparently good money in fucking lying to children and gullible parents of children as it relates to the distribution of drugs.

As kids, they told us that the big evil drug dealers’ M.O. was to simply give a kid some drugs to get them hooked, and thereby make them a customer for the rest of their miserable little lives.
First of all.  That is a shitty business model…
Kids. don’t. have. money.

Second of all, who has this kind of work to just GIVE away?  Even on The Wire, they would throw out “testers” in very small amounts only to alert the local paying customers of the quality of the shit they could then buy, but not in quantities that would get them hooked on the first try, which brings me to…

… the ONLY drug known to humankind that can prove addictive immediately upon the very first time you have it is pussy.
Ask me how I know, I DARE you.

So for the last few years, in the last couple of years, in the week around Halloween, I see the same nonsense shared warning parents that some bad individuals are giving out “candies” that aren’t actually candy.  Previously, the picture showed various ecstasy, but now with the advent of Mollies and other edibles, the lie is evolving.  It was even on my local news as I was waking up this morning.

Anyone who believes this is fucking stupid and I hope they get punched in the soul.

Me?  I make enough to cover my mortgage and bills and feed my family without worry.  I make enough to have a beverage when I feel like it.  I make enough to have fun when I have time to.
Let’s say, though, I worked as a drug dealer and once a year, I would GIFT each group who rang my doorbell a $20 edible or a $50 molly.  The doorbell rings about every 3-5 minutes from 5:30pm to 8pm, two and a half hours.  Doorbell rings 30 times with a group of 4 each time.  I will assume to have half THCs and half Mollies.  On averages, that would be $937.50 worth of Molly and $375 of THC gummies, right up the ass in less time that it takes to play a professional football game?  Who the fuck could afford to live like that?

Now, back to the original lie.  This is SUPPOSED to be a ploy to get the kids hooked, right?  Well who is to say that they REMEMBER which house gave them the good dope?  When we trick-or-treated, we easily trekked 3-5 miles through neighborhoods we did not live in and unless it was that one lady with the huge titties on Ross Avenue who was giving out full-size snickers when we were 12, ask me if we remembered who was giving out what?