In the Hotep Army... 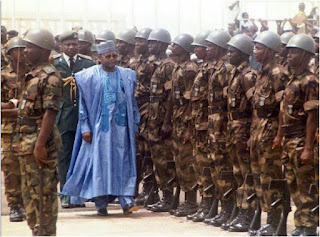 Look, the man doesn’t know how to pronounce “Niger” anyway, and that is why he isn’t talking about it.

That and he knows he is dead ass wrong.  He knows he is discussing a deceased Black soldier who died on some bullshit caused by some executive branch fuckery and now the executive branch is searching hard for a scapegoat, as they are often wont to do.
And since the favorite scapegoat wasn’t the one who banned travel from Chad to the US, causing Chad to pull assistance from the fight with the jihadists, Obama cannot be blamed for the four dead American soldiers.

Funny how that works out, no?

What is weird, though, is that a great many of us STILL don’t know the names of the three other dead soldiers, or what they look like.  I shouldn’t have had to Google to find a post with all the contained information, itself only posted less than a day before I typed this sentence.
What we don’t have, however, are coverage of Bryan Black or Jeremiah Johnson’s wives or Dustin Wright’s father being coldly told “he knew what he was getting himself into.”

Because they fit the description of a “hero” to the person delivering the message.

Since we can’t be heroes even when we’re thrust into the roles of doing hero shit, it is high time we quit this shit and start our own army!
Look, before anyone tries to remind me of the time Reagan made it illegal for people to own and carry their guns so Black people wouldn’t do it, don’t.  We remember.

But that Amendment that Republican Jesus Reagan enjoyed wiping his ass with suggests the words “well regulated militia,” and since no one has actually explained fully what that means.  In the dearth of specificity, we shall define that with what we make it.  In these gentrified-ass neighborhoods, we will train our kids physically, mentally and in the proper operation of weapons to protect our neighborhoods from “them.”  Like the military, we will train them in skilled trades to be used for the greater good when it is time to face the rest of the world and when “they,” as they are wont to do, come to try and take this hoteppian garden of Eden from us, we will be ready to defend ourselves.

As it were, we WILL lose some soldiers, but what better a death to die than defending something that IS in your common interests and not for some motherfucker waiting to tell your next of kin “he knew what he was getting himself into.”

Not to let anyone in on more than they need to know about me, but in my adult-adult life, I have worked full time for three companies.   I will not name any of the three, but you’ve assuredly heard of all of them.   I will cross fourteen years with my current employer next week.   More importantly – to me at least – each of my prior two company changes was of my own volition and I was not removed from the premises by any security folks for cause or anything such.      One benefit of being consistent with a place of employment is the accrual of leave time.   With my first real full-time (as in with a company that I didn’t work for when I was 18 and actually offered benefits) employer there was no expiration of leave time and I was so busy with school that I never had time to be far enough away to warrant taking time off for any real reason. A couple of years in, I found myself staring at WEEKS of accumulated off time and no real reason to use it.   Add to that the fact that I
Read more
May 12, 2017
1,349 Days
Read more