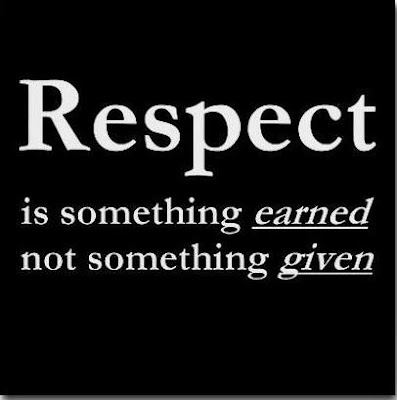 Far too many people think respect is something to be traded, like a commodity in the market or some shit like that.

The only thing you should be trading for respect is respectability.  What have you shown the world as your reason they should respect you?  What deplorable things have you NOT done?  What in your daily life would a reasonable person NOT feel less reasonable for respecting?
Yes, I know that respectability – and/or a lack thereof – is no longer a deciding factor in whether or not one is allowed to be the one chosen to pretend to run the country.   No need to remind me.
I don’t, will not, and can not believe in “you give respect to get respect.”  The reason is quite simple.
I will offer a metaphor.  I come from humble beginnings, have made major mistakes and have gotten a grasp on all of my shit to keep together a decent life for my child and family.  Sometimes that is in spite of myself, but the worst of it has been placed behind me and my work involves leaving it there.  I contribute to this blog every week and write tons more for things that will not make it here.  THOSE are respectable things.  Say, now, someone comes home from prison for pedophilia or murder or pushing an old lady down the steps…  That individual has reasons to respect me, but simply offering me his does not mean that I owe him mine, does it?  I can offer a thanks, I can show appreciation for it, but he is going to have to work for my respect, dammit.

It seems we offer things to people who have not yet earned it.  The young get sympathy, the old get respect.
Have you EVER encountered a group in general less worthy of sympathy than a group of bad-ass kids?  If not, I suggest you hang out at a playground for an hour on a Saturday afternoon before it gets too cold.
Likewise, have you EVER met anyone who felt more licensed to BE disrespectful than an old person who carries on as if “respect your elders” is absolute?

End game: EVERYONE who wants respect should be ready to work and earn that shit.  Anyone who DOESN’T want it, that way, has already gotten what they – however passively – sought to begin with.

Govern yourself as you should, but I FULLY treat respect the same way I do any spare fucks I might have to give.  You won’t catch me handing them out all willy-nilly, they’re kind of valuable.
life life lessons respect see through sundays transparent thoughts