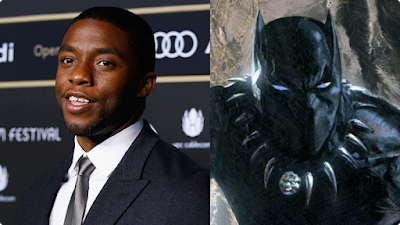 I am not joking, I mean this shit.

This man has played Jackie Robinson in 2013’s 42.  He played James Brown in 2014’s Get on Up.  Fuck, he was one of seven Black people who got real camera time in 2016’s Gods of Egypt and just might be the only one who was actually allowed to play an actual god!
Further, we have seen him make more Black people care about comic book movies with his portrayal as T’Challa/Black Panther in 2016’s Captain America: Civil War and in the upcoming eponymous Black Panther and Avengers: Infinity War movies.

I thought of this post on Saturday when one of my wives my lady took me to see Marshall in the movies.  The trailer for Black Panther played before the movie and this naturally made it more obvious (to me, at least) that with the above-listed movies an even MORESO after watching and LOVING Marshall (for real, y’all go pay money to see this), Chadwick Boseman is fast entering Hotep Hero status and is worthy of the best protection available.

1.  Don’t let him become one of the top 5.
This man is fast approaching relic status, has shown that he is capable of not only making but of standing his own as the star of the film.  It seemed that no one was exactly checking for the Black Panther movie before Civil War but T’Challa was the breakout star of that exchange.  We can’t – CANNOT – let “them” spoil it.
2.  No, there is not a fucking chance you can call him “Chad.”
His mama named him Chadwick, and dammit you will call him that too.  Who cares what you people are comfortable calling someone if there is an easier way to it, you will respect this man’s name until he tells you it is okay to call him “Chad.”  Look at Larry Laurence Fishburne, still trying to unlive his early career THIRTY YEARS AGO as the coonin’ happyslave who let them whitewash his shit on Pee-Wee’s Playhouse.
3.  If any of us receives word of him being offered a buddycop movie, we must be willing to bumrush the studio and create a couple of bodies if it comes to that.
4.  KEEP. TYLER. PERRY. AWAY. FROM. HIM.
Self-explanatory.
5.  WE need to rally behind him.  This is not the time to bootleg or Firestick everything he makes.  If we want Black representation worth seeing from Hollyweird, we have to show them so with our money.  And no, the DVD Man outside of Kroger is not “showing them with your money,” not in a positive manner.


We discuss this often and at great length…  Hollyweird hates us and has nothing invested in pretending they don’t.  In Chadwick Aaron Boseman, we have an amazing young – though older than me – actor who takes on great roles and makes them amazing ones.  He gets to play people our children can hail as heroes without being driven into or driven by stereotypes.
If we remember how these things really often end up, then we know.  As soon as “they” see us getting too strong, a random-ass arrest or nasty crack habit just happens to come up out of nowhere.
WE. MUST. PROTECT. CHADWICK. BOSEMAN.