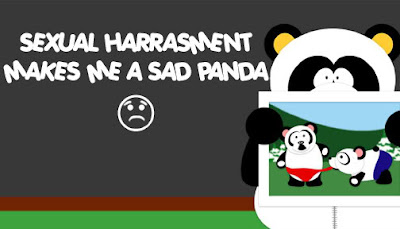 Man, we still talking about THIS shit?
I guess as long as it stays current events, the shit just ain’t going away, huh.

Y’all remember when I got fired last month for staring at, and then mentioning titties and no one came to assist me with the PayPal donations?
[link]
What about now?

Anyway…
After that ordeal, no one offered me any money to help with my situation and I am still wrangling with Wells Fargo over conditions with which to keep my house and creating tricks to save and make money back during my shopping haul over the Christmas season.
[Phlip note: this would be made easier if more people would share my posts and click on ads, y’know]

One contact I did receive was from a small production company looking to publish and make some online shorts in hopes of one day getting a show on a big network somewhere somehow.  They had a small staff and SOME grant money, but after reading my writing they offered to bring me in to work with them with the promise that when they struck it big then EVERYONE would eat.  With the understanding that if an opportunity to begin paying my bills without having to panhandle from my blog were to come along, I agreed to work with them.  If nothing, it would be another bullet point on my CV and something HUGE if we did so happen to blow.
The understanding is that I need very little supervision.  Throw an idea at me and leave me the whole entire fuck alone for an hour and I will have 11-1500 words for you to work with.

Day One:
Test run, I am given three ideas to choose from, all were random-ass items in the room we were sitting in.
Pssht, fuck outta here with that bullshit.  On MySpace, I used to post a status and give people three hours to offer the randomest shit to the idea, then interpolate them – no matter HOW many I was given – all into the story.  Three things in a room that I had already cased for ideas I might use later is fucking child’s play.
Headphones, music and being left unbothered, into my little area I went.  All I ask is that I am given a desktop computer keyboard to use, even if not a desktop computer.  I knew I was being watched while I worked, no problem.
A hair over an hour, I emerged from the room with a story fully written, edited, formatted to post or adapt for whatever use was needed.
“Done?”
Me: “Yep!”
“B-but…”
Me: “But what?”
“You didn’t seem to stop to think”
Me: “Oh I did”
“Really?  Looks like you just sat down and started typing”
Me: “… and I did…”
“With the random shit we hit you with?”
Me: “You hit me with things I was already thinking of ways to use”
“Fuck, this guy’s good!”
Me: “Thanks”
“See you tomorrow?”
Me: “Sure!”

And with that, I was done and on with the rest of my day.

Day Two:
We met in the office and commenced to this coffee shop down the block.  It was veteran’s day so school was not in.  Naturally, the mid-day was a mix of wannabe cool high schoolers self-proclaimed cool collegiate, plus the mothers dragging otherwise uninterested kids to the shops with them.  We sat off in a corner and the challenge, as it was presented, was to take things from our surroundings and craft something in a story that they could use for a story.  I was given until each of the three of us at the table had finished our coffees, plus the walk back to the office, to think and all the time I would ask for to write.
I looked around for a while, I drank half my cup of coffee.  I looked and said, matter-of-factly, “we can go when y’all are ready” to the incredulous grins of my hosts.
Back in my fishbowl, headphones on…
51 minutes, 1,123 words.
“You’re kidding, right?”
Me: “You can stop playing surprised, here”
“You can’t--…”
Me: “…  just read it”
“Ho-lee--…”
Me: “No, keep reading”
“Wow, are you fuck--…”
Me: “Nope…  The college kids were picking on the high school kids.  I heard it.  The high school kids were too preoccupied with the littler kids to notice, and--…”
“Holy shit!”
Me: “Right, the little kids were wrecked by that, but their mothers were too busy in the goddamned iPhones to be concerened”
“But--…”
Me: “Yes, so instead of the kids having a tantrum, their anger gave them super abilities and they formed a mecha and dragged the highschoolers out and tortured them.”
“Ha!”
Me: “The FUNNY part, though, is that their mothers were STILL too busy smartphoning to even notice the carnage taking place”
“you. are. a. fucking. GENIUS.”
Me: “See you gentlemen tomorrow”

Day Three:
I get to the office and let myself in.
The place is empty.  I sit down at a table in the break area and get up to grab myself a cup of water there is a sticky note on the water cooler, as if to expect I would be there before they arrived back. 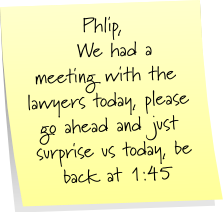 Music on…  I started to type and one of the guys’ girlfriend walks in looking for him.
I showed her the sticky note and that I was just there to write and then leave.  She makes a little conversation, really kind of distracting me before I excused myself to get back to it.
With disturbance, I was finished in an hour and 25 minutes and let myself out.  At 1:30, I returned to discuss what I had written.

“YOU MOTHERFUCKER, YOU FUCKED MY FIANCEE?!!?”
Me: “uuuhhhh…  no!”
“It says right here in the story that you--…”
Me: “Sure, she came in the office and we were alone--…”
“grrrr--…”
Me: “And sure, she MIGHT have struck up conversation with me while having prodigious titties”
“I swear to God, I will--…”

Their lawyer enters the room and sits down between them.  They converse a bit between them and I can barely make out a damn thing being said…  He looks at me.

“How much to make this all go away?”
Me: “Right now, or on the back end?”
“ASAP”
Me: “hmm…  Never thought of that, but in the right here and now, $72k on my mortgage and residuals on whatever of my writing on that computer that y’all use sounds like a start”

So on the first day, I Usual Suspects’d a story while sitting and talking to them, and that was cool.  Obviously fiction, definitely realistic enough to be true.
On the second, I made up some shit about some little kids kirking out and becoming a giant fucking robot on some bigger kids for picking on them and that was cool.  Slightly less realistic but rooted in reality.  Still obviously fiction.
But NOW?!!?

I cook up one based on his girlfriend coming in the office while I was in there by myself.  She came onto me and because I really wanted this job blinded by titties and cleavage, I didn’t rebuff her as strongly as I should have.  One thing led to the next and bam, shit happens.  Instead of letting her run to them that I was the aggressor, I went to their lawyer with a voice recording of her being all coquettish with me and shit.  Maybe it was innocent on her part, maybe I am the idiot for taking it as such, but I am NOT the dummy when it comes to getting my motherfucking bills paid.  Sexual harassment has FINALLY worked in the favor of a man for once.