Prince Harry might low-key be the absolute most wokest person in the whole-ass world…
Stay with me here.

While his father shook up the game by challenging norms in marrying in the first place – and subsequently divorcing – his mother, it can be said that Charles set the blueprint for the bucking of norms that Harry has now taken to another level.

You read that right, the man who is 5th in line to the throne is planning to take himself a woman from a middle class, albeit well-to-do family in America and turn her into a prominent Black princess. Bearing his place in the pecking order of his family, she is five heartbeats (not to be confused with Duck Matthews and them) from being a prominent Black Queen.
Yes, we are very sure that there are Black Queens in Mother Africa, but the word to read into that sentence is prominent. She could become THE queen of one of the most historically important kingdoms in modern humanity.

Why, then, you ask… Why does this make Harry so damn ‘woke’?

Thanks for asking. Betting his family’s history and that of the line to the throne and all of the shit that has happened on their own continent as well as Africa, North America, Asia and Oceania, is preparing to bet the whole ball of wax on letting the future of the world – the whole-ass world – be bet on Black babies.
And miss me with that “they’ll be mixed because she already is” shit. We will not strip this Queen of the Blackness that y’all have otherwise forced on us for the last 500+ years with the “one drop rule.” She is black and Prince Harry’s babies will be black.
Black babies… Wait, let me show something I saw on the BookFace yesterday. 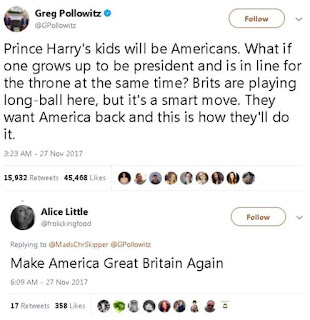 Meghan was born in SoCal. That means that she is a US Citizen, no matter where she moves to until/unless she denounces her citizenship. Unless/until she does that, any child squozed out of her is automatically born a US Citizen and that has no bearing or matter to what any of your conservative neighbors have said about Obama but ignored about John McCain, Rafael Cruz and George Romney (Mittens Romney’s dad). Her kids are born with birth-right citizenship in the United States immediately upon birth and since Harry MUST be a UK Citizen, the kid will be a British Citizen AND Royal.

Let’s say all the male children between Harry and the throne go before HE does, and he himself sires a son. That son is next to the throne after him. That same child, through birth right citizenship is eligible to be President of the United States immediately upon their 35th birthday, provided they spent at least 14 years (no mention of them being consecutive) in the US and no 14th or 22nd Amendment quandaries exist.
This is where it gets fun. Let’s say she has two kids and one of them is male. All other people ahead of Harry to the throne don’t make it. When Harry goes, that kid is King. The other kid – still a US Citizen, I remind you, spends time in top-level private schools in the United States with his/her grandparents. The older one eventually becomes King when Harry can’t anymore. The younger one goes on to become POTUS.

Their mother has “Black in America” stories, we all do. They include being too Black for white spaces and too white for Black spaces. I am sure, as I have experienced with close friends, that she will have shared these experiences with her kids because it is best for a kid to be prepared for a fucked up world than blindsided by it. These kids will ascend to the throne in the UK and to the White House in the US.
Bear in mind that this is AT LEAST 37 years from possible right now given current rules, but stick with me.
Prior administrations have managed to cripple the US for a few years, maybe a succeeding administration or two, but not a whole motherfucking generation. If we have learned nothing more from President Twitter Fingers, is that NOTHING will be the same before he finally leaves office before completing one full term We can call that a "challenge accepted."

The Royal Children will collude. We will ALL be repatriated and again become beholden to the throne. And the throne will be inhabited and abetted by a proud Black family in these Beautiful Black Babies Harry and Meghan are about to have.
black power hotep hotep heroes mommy what's a hotep? No-Shave November royal family