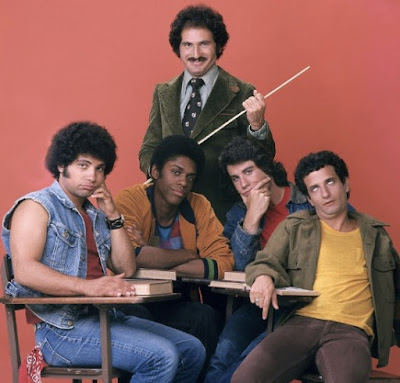 ("one of these things, is not like the other things")

And yes, “White Savior” is a thing.  Not that it should be a thing but when has that ever put the proper brakes on such foolywang.  Click here and check up on it sometime.

Welcome Back, Kotter was a sitcom that aired from 1975-1979 and in various forms of syndication for those like myself born in 1979 or after.  In it, we have a wise-ass teacher returning to his Alma Mater to take on the task of whipping a remedial class into shape.  Some good ol’ Stand and Deliver-type shit, right?
Wait…  Stand and Deliver came out in 88, strike that from the record.  Anyway, we have failed baseball player and mediocre comedian Gabe Kaplan in his showrunner and acting debut, revising the history of his apparent real life, except this time he gets to come in and help The Sweathogs with comedy and hilarity.

Still pretty safe, no?
WRONG!!!
Freddy Percy “Boom Boom” Washington and Juan Luis Pedro Felipo Huevos Epstein – in the most ironically-named character on a sitcom written by a Jewish man – are the only minorities in this class.  Additional stereotypes are baked into the premise of this story when we learn so late on that Freddie knows his father’s name and that Juan is one of 10 children.

Anyway…
Despite overseeing a “remedial” class, Freddie and Juan are the ones with the pronounced characters in the dog-and-pony show, with their laughs, mannerisms and such.  Without another avenue, we get Freddie written in as an aspiring basketball player who apparently never makes it, and is driven only by the reassurance of a white man telling him that he relates.
… because either you’re slinging crack rock or you got a wicked jumpshot.

Pandering?  Yep!  Remember season 1 episode 15, when the White Savior convinced the boys to have a sit-in instead of a foodfight?
“1-900-Blame-a-nig”?  Of COURSE!  Season 2 episode 3, he is accused of stealing money to buy a bike!
“… but they’re so violent!”  S2E4, wherein Freddie threatens to beat up Vinny Barberino for not doing his homework.
“Sitcho ass back down!”  S2E21, wherein Freddie is a hit than on the radio after his buddies decline and the response is not to be happy for him, but to NOT be friends with him anymore.
“Don’t trust em.”  S3E13, Freddie gets accused of cheating.
“Dope-sick negroes.”  S3E22, wherein Freddie gets hooked on prescription painkillers, 35 years before the shit became cool.
“Stay. In. Your. Place.”  Frequent attempts were made by Freddie to be the ‘leader’ of the Sweathogs, once even taking over until the rest of the group apparently decided that a brown man in their lead was just too damn much and ousted him as a dictator, Obama-style.

Hollyweird always has and always will hate us, simple as that.

The Jewfros were epic though.
I bet y’all expected me to talk about The Blind Side when discussing White Saviors, didn’t you?
black power hotep hotep hollywood hotep shit mommy what's a hotep? No-Shave November welcome back kotter white savior