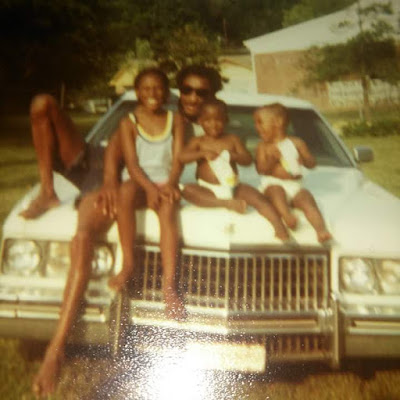 (I'm the one in the diaper with the beard)


When he worked third shift, he would get home from work right about the time we’d be waking up.  We were often in the house – even outside of the few months we lived there – so we were there when he came in on Saturday morning.  We’d wake up and take us to this tiny greasy-spoon diner around the corner.  They always knew what he wanted before he asked.
The place closed sometime before I was old enough to take HIM to breakfast there.  I hate I never had the chance.
It is a fish place now, but I still have warm flashbacks every time I am in the building.

Often in my school years, especially in 4th and 5th grades, we would be in class about to go to lunch.  “Phillip, your granddad is here.”  He would sit and eat with us and our friends and generally be the coolest old man in the building.  Furthermore, he would bring us all happy meals.  Never once do I recall TELLING him how many people I normally sat with at lunch, I am guessing he gleaned it from conversations at the end of the days.  He did this despite the fact that he would inevitably need to be back at work that evening.

When he spoke, you would shut up and listen.  Not because he would yell at you or hit you or anything, but becuase he spoke to you in a muted tone that made you want to receive what was being said.  In the years since – and ESPECIALLY since he passed – I am seeing more and more the lessons hidden in what at the time felt like fun times playing tennis on the courts and Dudley, shooting ball or hitting golf balls in Bluford Park or waking up at 2am to play tunk and stealing sips of his cold duck.

He loved a big car and loved a good drink – Scotch was his thing.  After he retired, I would swing by the house no matter where in the city I was and catch him sleeping at his desk in front of an old western.  We’d shoot the shit about the Lakers, life in general and whatever HE wanted to talk about.  He loved his grand and great-grandbabies.

I can’t honestly say I have ever seen him angry at anything other than my grandmother and even she came clean later on that it was usually her and not him.  Even after, when she was mad at one of us, inevitably we'd hear "you're just like your granddaddy!"
Thank you Granny, that is something to aspire to.

I miss that old man.  I hear his voice at the moments when my conscience intervenes.  I visit his grave on his birthday and Father’s day.  I sweep it off, sit down next to it and talk to him.  What I wouldn’t give, though, to walk down that hall and catch him snoring back at the TV in that Lakers hat though.
family just some thoughts life love No-Shave November pop-pop see through sundays transparent thoughts vulnerability