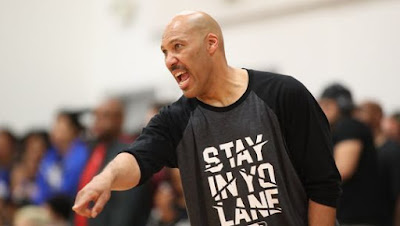 (wait…  Joe Jackson isn’t dead yet?  Well damn, is he like a little bit sick or something?  Oh well, carrying on!)

I think you see where I am going with this one.  Previous winners would include the likes of Earl Woods and Richard Williams.
While the days of whooping your kids asses in order for you to live off of their success are gone, there still exists a world where you can push them to continue to do something they may or may not actually want to do to the point of extreme success, for which you will yourself be rewarded with a share of.

F’rinstance, no one exactly knows whether or not a young Eldrick Woods actually wanted to play golf, but his father – an old-school Black man raised through Jim Crow – pushed his son to be good at what was and still kind of is a white man’s game.  It worked to the point where he was the best to do it for a very long time.

On that same token, no one exactly knows whether Venus and Serena Williams themselves wanted to play tennis.  What we do know is that their father decided before they were born that they would and as a Black father raised in the Jim Crow south, pushed his children to excel at what was and kind of still is a white man’s game.  For his (and their) troubles, we got the most consistently dominant powers women’s professional tennis may have seen.

So how does this all make LaVar Ball “Black Dad of the Year”?
Look at it like this…  He was a shitty college basketball player and only good enough at football to make practice squads, not getting enough run to actually get NFL Pension money.  He decided, though, that he would make his sons better athletically than he was and make a way to cash in on it all himself as well.  Through AAU and helicopter parenting at their high school, the light has shined brightly on the Ball family for a couple of years now.  Of his three sons, one (Lonzo) was good enough to get big-name college recruiting noise and delivered on it well enough to be the second overall pick in the draft.  Poor shooting and distractions from dad notwithstanding, the return on investment remains to be seen.
But that isn’t the part to be concerned with.  He was just the opening of the door.
Behind him, he has two brothers; middle brother LiAngelo and youngest LaMelo.  Pay attention to them.  Lonzo has the skills and his shot can be fixed.  LaMelo might wind up being the best of the three, combining the skillset we want Lonzo to maximize and size that neither of his brothers have.  Well what about the middle child?  He is and was not projected to make the NBA, but still got scholarship money to be at a premier national school.  When that was damned by teenage stupidity, he got no basketball, but kept his scholarship.

All the while, family patriarch has kept the family name hot in the traditional and social media mentions, going as far as to even beef with the president.  He knows as well as any of us that one of his sons is not going to make the league and that one of them better get his shit together if he intends to stay in it sans-ridicule.  While he has one there and still 3 years out from the next one making it, he is shilling ugly-fuck sneakers 6 times what they should be charged for.  What that will do is set his sons – but obviously more important to him, himself – up financially for the rest of forever with a quick 1-3-year cash grab.
Operating as if in a microwave; cook it fast and consume it quick because it won’t last long.

Whereas Jackson, Woods and Williams all set their kids up for the long term USING the long term, Ball has set his kids’ success up for the here and RIGHT now, knowing that it is wholly possible that they all share his own ability to make it on their own physically.  The fact remains that he is not throwing them to the wolves immediately upon their 18th birthdays with the “good luck, lil buddy” that many of us may or may not get as black men, but is at least giving them the tools they will need to succeed.  That is commendable, even if you do consider that he is setting himself up to cash out more than they might.

And for that – excusing the selfishness of it all – we give LaVar Ball the Joe Jackson Memorial Black Father of the Year Award.
bad decisions basketball black people love chicken hotep hotep heroes lavar ball