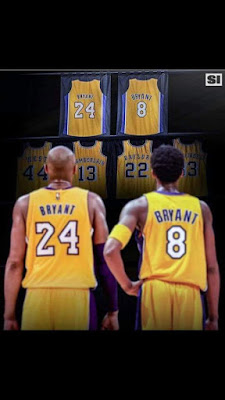 We knew the day was coming.  We knew it April 2016 when he made his Swan Song in that 60-pt exit from the only full time job he will need to have had.
I’m 38, and with the exception of a couple of bandwagon years with the Payton/Kemp-era Sonics, I have always been a Lakers fan.  After my Junior year in high school, there was a magazine and newspaper (no one was on the internet like that in 1996) buzz about a dude near Philadelphia who was looking at ACC schools but had since decided to skip it all and go straight to the league.

I was interested in it because the buzz was immediately “local” because the arrangement seemed from the beginning to be that the Charlotte Hornets – only about 90 minutes from me – would be the team to draft him with plans to trade him to the Lakers.  The interest was because the guy was only 10 months and some change older than me.  The interest was because it was becoming immediately apparent that the Lakers would be interesting again for the first time since my favorite player ever got sick.
Young, brash, cocky, whatever superlative you want to apply.  #8 Kobe was that, he even made Adidas basketball shoes interesting for a fleeting minute there, and I had a pair of Crazy 8s.

One thing I LOVED about 90s basketball was that guards were not afraid of the prospect of getting THUMPED on the way to the rim en route to christening a center into a poster.  #8 Kobe gave us plenty of that in spades… 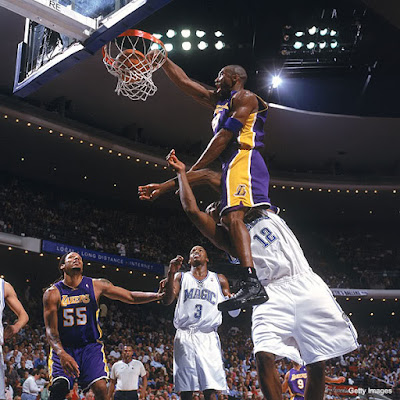 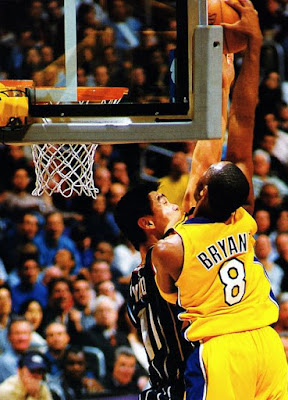 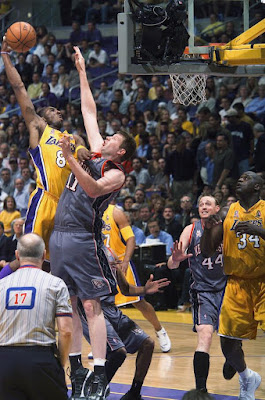 Then shit changed after 10 years…  Gone were the “welcome to the league…  BITCH” theatrics of simply swooping in and dunking on people, and in came the tactical strategist who wanted to win without necessarily overextending himself but still killing his opponents.  It was like a guy showing up to a knife fight with no knife, fully planning to take yours and use that.
…  and then fucking doing it, no matter how hard you try to stop him.

Out with #8 and in with #24.  The change was as much philosophical as it was aesthetic.

The league had changed.  Despite players getting bigger and more athletic and the NBA not testing for HGH until 2015, gone were the nightly guarantees that someone smaller than 6’9” would attempt to dunk on someone.
This is when we learned to see Kobe at his best, in my opinion.  He went back into the Jordan catalog and improved his long-range shooting, he worked with Hakeem and upped his post game.  He carried a dude named Smush Parker to the playoffs twice.

“You’ll never win a title without Shaq” is what we all heard from the peanut gallery.  No response directly, but quite literally we can understand to have heard the man say “… challenge accepted.”
Perhaps for better or worse, the Lakers organization was a revolving door of players who would come and go on to greener pastures that were not necessarily yet greener and the blame was often steered at Kobe.

How many of us have heard that bullshit?  No…  You were a Kobe fan if you were a Lakers fan.  For most of the 20 years, for a sizeable share of five championships in that 20 years, for a LIFETIME of memorable basketball moments – good or bad – Kobe Bryant was the Lakers.  Magic conceded that Kobe had cemented himself as the greatest Laker.  Jordan himself said that while everyone SINCE him has copied his moves; Kobe had made the best use of them.
I guess that is to say it’s cool if YOU’RE not a fan of Kobe but when the greatest to ever do it are then your opinion doesn’t register.

I saw faces at the game last night who didn’t even PLAY for the Lakers.  Allen Iverson, Bill Russell, I swear I saw Zo Mourning there, Shaq was in the building – hell even Jerry West and Mitch Kupchak were there!.

The outpouring of kind words from current and former players the world over shows the kind of respect the man had gained for his work in the league.