December 15, 2017
I knew he would pull some shit like this.
In a week where he was unable to push a GOP senate candidate over the finish line in the reddest state on the planet despite coming dangerously close considering that man is also probably a pedophile, we knew he would be a bit pissed coming into what he has up next.

I kept F5’ing his back-channel Twitter to see what we would get in response.  It seems we were only given 12 bars this week after a couple of weeks off. 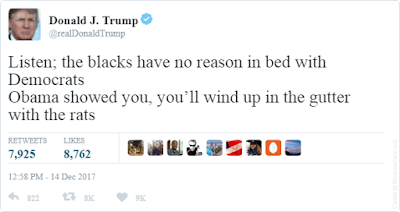 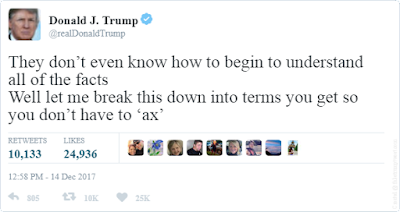 It seems this man lives to blame anyone but himself or anyone whose position he agrees with.
Roy Moore is Roy Moore’s problem.  He has openly longed for the days where slavery was a minor nuisance to the strongest time ever for American families, has pined to do away with very constitutional amendment after the 10th and most famously HAS MORE THAN LIKELY TRIED TO FUCK CHILDREN!

None of those are relevant to this situation.  The Democrats, they’re the red herring.  Obama, despite having been on the most epic vacation ever invented for the last 11 months, is somehow complicit in it too.