The dog NEVER has a plan for when it actually catches the car.

Think about that for a minute.

People tend to aim for a reaction out of people; something they can see, something that can be quantified.  They are not owed that but human nature seems to fuel the ego that causes one to seek it no less.  A reaction is emotional.  It is (usually) immediate, overblown and underthought.  It is a “rise,” as in “getting a rise out of someone.”
It is giving the enemy (real or perceived) what they want.  Unfortunately, it is an mentally void behavior that apparently doesn’t disqualify one from the Presidency.  Many think it is a show of strength, something that shows off the preparedness to deal with a situation.  It isn’t.  It is an opportunity to show foolhardiness, usually a show of fear.

Respond, don’t react.  A “response” doesn’t have to be verbal or contain any action.  Sometimes the BEST responses are to deny the attention seeker the attention they desperately seek to gain.  The best revenge is living better.  And no, not in a competition in (necessarily) living better than them so much as living better than they think you are or should be.  The beauty is that it never requires actual participation.  Just go on with your life, what people feel or don’t feel do or say about you is THEIR business until it impedes on your ability to provide food/shelter/clothing or reach an orgasm.

Respond, don’t “react.”
Sometimes a response will require some action on your part.  Sometimes you have to defend yourself.  Sit and think about it, work the resources you have available and make the best and clearest decision.
The dog just knows they want to chase the car, they don’t know what to do with it when they catch it.  A more fun concept to employ is that the what the hunter might do when the rabbit has the gun. 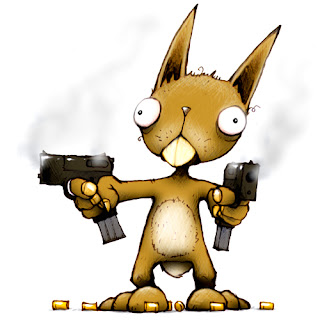 Most people seeking a reaction do so from a place where they feel they have the power to elicit such a response from someone.  To take someone there; to burn them down and out emotionally is a thrill to them.
Resist that shit.  Fight back with NOTHING.  Refuse them what they desire.  Deny them the attention, don’t scratch that itch for them.  Let them immolate themselves in their inability to run/ruin your life or waste your time.  Don’t give the audience.